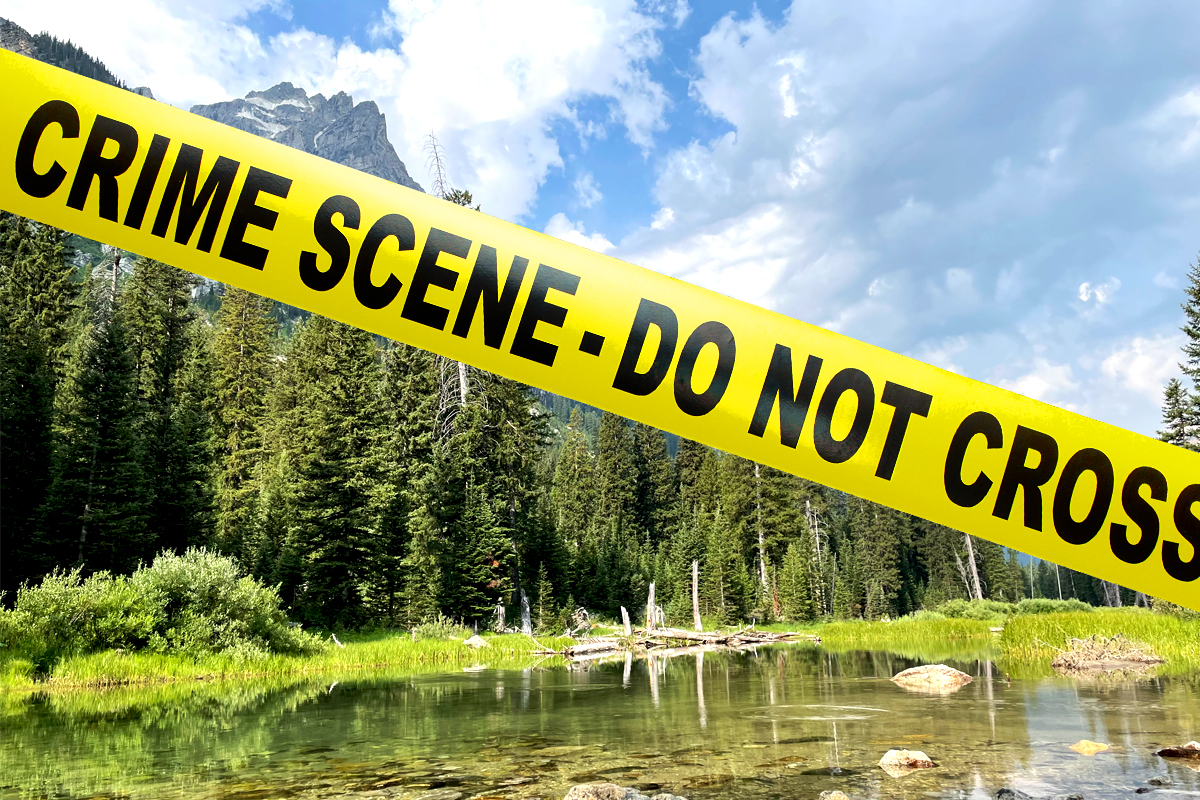 The tragic Gabby Petito story sparked some controversy and got a lot of attention the past few weeks, though you can’t be blamed for letting it fall off your radar with how fast news cycles move. The internet churned up plenty of conspiracy theories — including the notion that national parks are a haven for cannibals — in the wake of Petito’s disappearance, the discovery of her body in Grand Teton National Park, and the continuing search for the prime suspect in her murder, boyfriend Brian Laundrie. But is there any truth to claims that death — particularly homicide — is disproportionately common in national parks?

In a 2019 statement, National Park Service chief spokesman Jeremy Barnum said there’s an average of six deaths each week within the considerable National Park System. That’s approximately 312 deaths per year, or one death for every 1 million visitors.

Based on an analysis of data from 2007 to 2018, there are many ways people perish in national parks. Drowning is by far the leading cause of death. Other common causes include vehicular accidents, falls, poisoning, wildlife encounters, natural causes, and suicide. Visitors have even been boiled alive in hot springs, and one person was decapitated by an unlatched gate.

Lake Mead, Yosemite, and Grand Canyon National Parks recorded the most deaths during the aforementioned time period, but North Cascades National Park in Washington registered the highest death rate. It is, by far, the next deadliest park with 65.2 deaths for every 1 million visitors: 65 times higher than the park system average.

Hikers can avoid many of these life-ending incidents by carrying bear spray, not snapping selfies with animals, and practicing common sense.

Aside from those deaths, the park service has also reported hundreds of fatalities with unknown or undetermined causes, as well as missing persons whose bodies were never located, and even more may have gone unreported.

The FBi of National Park Murders

Often called the FBI of the National Parks System, the Investigative Services Branch (ISB) focuses on serious crimes that occur in national parks. As of 2020, just 33 ISB agents operating out of four field offices are responsible for the 85 million acres of park service land in 423 areas spread across the country.

According to the ISB’s most recent annual report from 2019, the agency investigated 674 cases in 2019, and 59% of those were “crimes against persons.” The Pacific field office alone conducted 13 homicide and manslaughter investigations (though only four were new cases for the year) and 12 “questionable method of death” investigations in 2019.

But total homicide and missing person numbers are notoriously difficult to come by.

National Park Murders in the Mountains

Just weeks before Petito’s case made headlines, a pair of newlyweds camping near Arches National Park went missing. Their bodies were later found, and it was determined they were shot to death. They had told friends about a “weirdo camping near them,” but officials have yet to identify a suspect.

These two cases are just the latest examples of all-too-common murders in and around national parks, like these notable cases:

Shawn Pendergraft and Sara Ellis both worked at the Pisgah Inn along the Blue Ridge Parkway in the summer of 2018. Pendergraft said the pair went for a hike one afternoon, but Ellis turned back when it began to rain. He found her hat and umbrella along the trail on his way back and reported her missing. Rangers quickly found Ellis’ body just off the trail, and a day later, Pendergraft admitted to killing his co-worker.

According to the indictment, Ellis was especially vulnerable due to a hearing impairment, and Pendergraft killed her in the midst of a sexual assault. Pendergraft pleaded guilty to first-degree murder and two counts of aggravated sexual abuse. In 2020, he was sentenced to life in prison.

In 2016, park rangers spotted a vehicle parked along Blue Ridge Parkway. When a man and small child exited the vehicle and started descending a steep embankment, the rangers moved in to investigate. That’s when Seth Willis Pickering suddenly stabbed his 6-year-old daughter Lila in the heart, and she died at the scene.

Pickering was in the midst of a custody battle for his daughter and told rangers, “Now they will never be able to take her away from me.” He was sentenced to life without parole.

In 2015, ISB agents responded to reports of a stabbing at the Oconaluftee Baptist Church inside Great Smoky Mountains National Park. They found the lifeless body of Tyler Gaddis, a homeless man, with at least 16 stab wounds on the church floor. The next day, Johnathan Hill told authorities he was present when Forrest Hill killed Gaddis for interfering in his relationship with a woman.

Forrest Hill pled guilty to second-degree murder and is serving a 16-year sentence. Jonathan Hill received a 4-year sentence after pleading guilty as an accessory.

When Harold Henthorn called 911 on Sept. 29, 2012, he told dispatchers his wife Toni had fallen during a hike in Rocky Mountain National Park and sustained a head injury. Henthorn claimed he didn’t see how it happened and performed CPR on Toni while waiting for help.

By the time a ranger reached them hours later, she was dead. Henthorn’s story was filled with inconsistencies. As investigators dug into his personal life, they discovered his first wife also died a suspicious death and uncovered damning evidence that neither death was accidental. In 2015, a jury found Henthorn guilty of first-degree murder. He’s currently serving life in federal prison.

Not long after moving to Hawaii from Seattle, 44-year-old Arman Jonhson went for a hike in Hawaii Volcanoes National Park in 2005. His body was later found 100 yards from the Mamalahoa Highway. Johnson died of a single gunshot wound to the back of the neck in what some called an execution-style killing. Investigators have been unable to determine motive or name a suspect in over 15 years.

In 1999, the decapitated body of Joie Armstrong was found along a stream near a campground for workers in Yosemite National Park. Cary Stayner, whom police had interviewed in another murder case earlier that year, confessed just a few days later to murdering Armstrong and three other women after fantasizing about killing since he was a child. The “Yosemite Serial Killer” was convicted of all four murders and is currently on death row.

In May of 1996, 26-year-old Lollie Winans and 24-year-old Julianne Williams set out for a trip to Shenandoah National Park with their golden retriever. When they didn’t return home as planned several days later, Julie’s father reported them missing. On June 1, park rangers found the women’s bodies near their campsite — hands bound, mouths gagged, and throats slit. Although authorities arrested Darrell Rice, DNA found at the scene didn’t match the suspect, and charges were dropped. The grisly murders remain unsolved.

So what makes so many murderers choose national parks?

Many researchers argue extreme temperatures — heat in particular — can cause erratic, violent behavior, and crime rates cool down with the seasons. National parks do see the highest attendance in the sweltering summer months, and a large portion of the violent crimes occur while visitors are outside during this timeframe.

This might explain some crimes of passion in the parks, but many cases appear to be premeditated before hikers hit the trails here and other wild places such as national forests, state parks, and along the Appalachian Trail.

The vast expanse of national parks makes them prime spots for covering up a crime. Alaska’s Wrangell-St. Elias National Park & Preserve alone covers 13.2 million acres of mostly untouched wilderness, and even the nation’s most-visited park spans more than half a million acres. The park service manages over 80 percent of its land as wilderness, leaving plenty of spots to kill undetected or dump a body.

The growing number of cold cases seems to confirm people can kill in the parks without witness or much worry of their victims being found. And even if authorities do locate a body, killers can pull a Henthorn and blame it on a fall.

The parks simply leave plenty of opportunity for the homicidal. A 50-square-mile section of Yellowstone National Park known as the “Zone of Death” with hazy jurisdiction lines could hypothetically allow perpetrators to literally get away with murder in a legal sense.

National park murders and mysterious disappearances have garnered a cult following in recent years. Books and documentaries have attempted to uncover the truth behind the seemingly inexplicable, and petitions have called for better tracking of missing persons in national parks and other federal lands. There is no centralized database currently for these cases, and some former officials estimate the number could be hundreds to thousands.

Read Next: Intense Photos From the West’s 5 Most Extreme 2021 Wildfires.