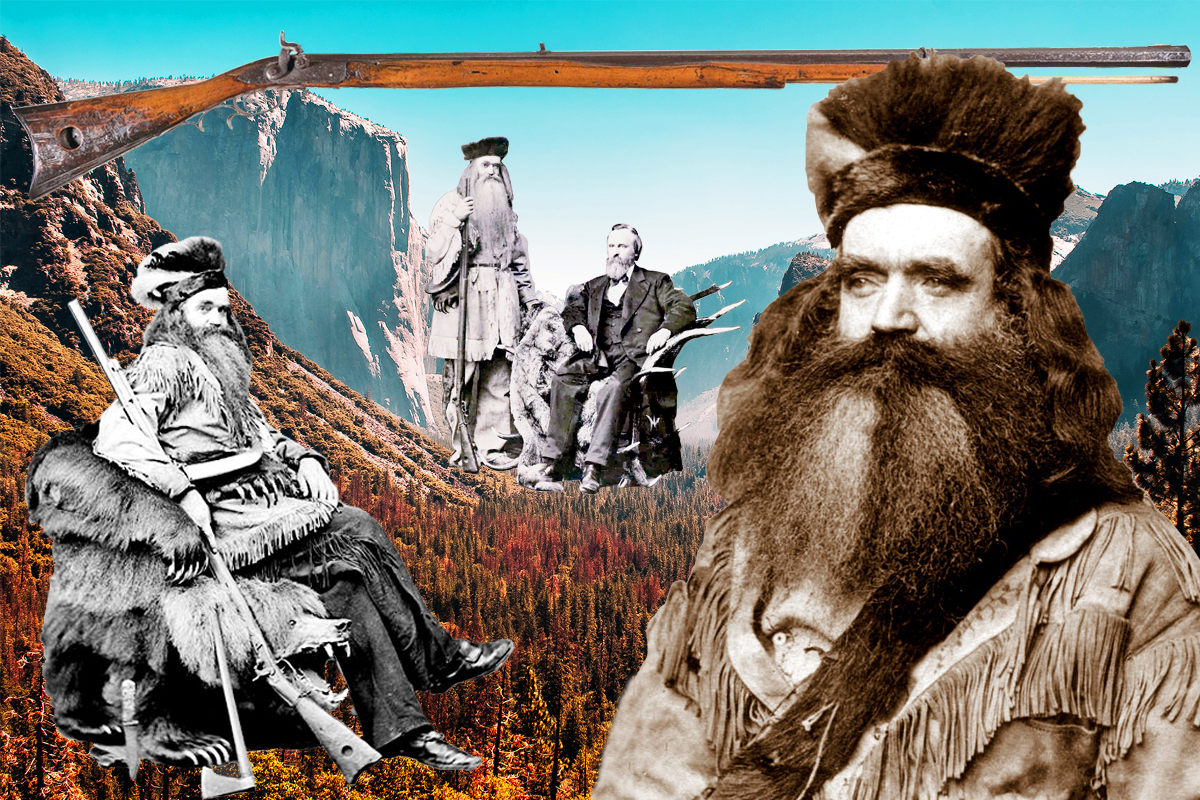 The early 19th century was an era of explorers, hunters, tall tales, and the mountain man. No one personifies all of that better than Seth Kinman. If you’ve never heard of him, sit back and get ready for a hell of a story about a legendary hunter, trapper, hotelier, saloon keeper, chair maker, and musician who killed more elk and grizzlies than he could count and turned wild game parts into furniture that he gifted to US presidents.

This iconic frontiersman, who some said had a cruel streak in him a mile wide, met a surprisingly unceremonious end at his own hand, but it wasn’t suicide.

The boy who would become “Mountain Man Seth Kinman” grew up in Pennsylvania and was born on Sept. 29, 1815. He and his parents, James and Eleanor, moved to Illinois in 1830. There he worked with his millwright father until 1839 when James died suddenly.

Seth claimed that his father knew Abraham Lincoln from their time together serving in the Black Hawk War. He also claimed to have met Lincoln when he was still just a circuit lawyer and that they became friends. True or not, Seth would have many verifiable encounters with several occupants of the White House.

Seth inherited a percussion-conversion long rifle when his father died. The gun was nearly four feet in total length and already had an impressive history longer than the gun itself!

James Kinman is said to have purchased the rifle in 1831 from a man in Kentucky who claimed that his father had used it under Gen. Andrew Jackson’s command at the Battle of New Orleans on Jan. 8, 1815. This fact is actually inscribed on the gun.

Written in the semi-literate style of the day, the full inscription on the barrel reads: “Gave Many an Englishman a Belly Ake / From Off the Cotton Bails at New Orleans / Jan. the 8 1815 Old Kentuck.”

The gun’s original owner, known only as “Bridges,” claimed the rifle was used to kill Maj. Gen. Edward Pakenham, commander of all British forces in North America during the War of 1812. Pakenham is actually believed to have been killed by grapeshot fired from a cannon, but Seth felt strongly that one should never let the facts get in the way of a good story and likely appreciated Bridges’ account of events more.

Seth said the rifle was originally stocked with a nice piece of walnut. He replaced the stock himself after it was damaged when a grizzly bear chased him up a tree. He once claimed to have killed more than 800 grizzlies in his lifetime; again, that may or may not be true, but it certainly makes for a good story!

Kinman killed untold hundreds of animals with his rifle, which survives to this day — but more on the gun’s fate in a bit.

As a young man, Kinman first made a living running a hotel, but in 1849 when gold was discovered in California, Kinman left behind his life as a hotelkeeper and joined the hordes of men who tried to strike it rich prospecting for the color. Sadly, his wife and two of their children died while he was away.

Prospecting didn’t pan out for him, and by 1853 Kinman switched gears and became a full-time market hunter providing food for Fort Humboldt in Eureka, California.

At one time, he reported killing 50 elk in a single month. Given the number of men he had to feed at the fort and how abundant elk were at the time, that might actually be true! It was there at the fort that he met another future Oval Office occupant: Ulysses S. Grant. The future president was stationed there for a handful of months that just so happened to overlap with Kinman’s time there.

Kinman Made a Rough First Impression

Kinman’s hunting prowess and his tall tales made him a frontier celebrity, but not all the stories about him were rosy. He first made a name for himself hunting grizzlies in California, which had a massive population at the time, but that didn’t last long. By 1868, the last grizzly in Humbolt County had been killed, and Kinman moved on.

Around this time, Kinman met Methodist bishop and writer Oscar Penn Fitzgerald on a steamboat in California who recalled him being a drunk who was proudly abusive of bears and Native Americans. Fitzgerald recorded his impressions of Kinman in the sketch The Ethics of Grizzly Hunting, saying:

“His countenance was expressive of a mixture of brutality, cunning, and good humor. He was a thorough animal. Wild frontier life had not sublimated this old sinner in the way pictured by writers who romance about such things at a distance. […] His eyes were nature’s special label of one of her malignest creations.

Decades later, Fitzgerald compared Kinman’s eyes to those of the California bandit Tiburcio Vásquez: “Only in two other human beings have I ever seen such eyes as those. […] It was the eye of a wild beast, the baleful glitter you have seen in the eyes of snakes, panthers, catamounts, or other creatures of the reptile or feline kind.”

With a description like that, it’s easy to be skeptical of Seth’s claim that President Lincoln was a good friend of his, but they certainly knew each other. While it’s hard to imagine Lincoln rubbing elbows with someone like Kinman, it’s probably one of the few truths in his life, though not all of the details of their relationship may be 100% accurate.

Kinman claimed he spoke to Lincoln the day before he was assassinated and further claimed to have actually been at Ford’s Theatre that fateful night where he witnessed John Wilkes Booth shoot and kill the president and flee from the theater — but this is likely another of his embellishments. After the president’s death, Kinman participated in at least two of Lincoln’s many funeral processions between Washington, D.C., and Springfield, Illinois.

When Seth wasn’t busy traversing the Western frontier, hunting for the military, or engaging in savage acts of violence against Native Americans, he was doing something much more subdued: He made chairs from animal antlers and hides.

The only thing odder than Kinman’s knack for furniture making — and perhaps the furniture pieces themselves — was the big-name clients he had. Presidents James Buchanan, Abraham Lincoln, Andrew Johnson, and Rutherford B. Hayes were all personally presented with chairs that Kinman made by hand from various antlers, horns, hides, and other material gleaned from wild game. Buchanan was reportedly so pleased with the gift that he returned the favor by buying Kinman a rifle and two pistols.

An article appeared in the Dec. 9, 1885, issue of The New York Times about Seth’s unique presidential gifts. The headline refers to him as “the pacific coast nimrod who gives chairs to presidents.” And yes, nimrod meant then what it means now.

A Mountain Man Dressed for the Part

Seth capitalized on the celebrity status generated by his tall tales, frontier dress, and unusual chairs. He embraced the romantic idea of the mountain man and posed for a variety of photos that he then sold as souvenirs. Decades before Buffalo Bill Cody commercialized the “Wild West,” Kinman recognized the profitability of the Western mystique.

There are many photos of “Mountain Man Seth Kinman” posing with his chairs, and his rifle is in almost every one. The renowned Civil War photographer Mathew Brady took many of those photos. The rifle even shows up in a rough sketch by Alfred Waud, which depicts Kinman’s presentation of a chair to President Lincoln, who is holding Kinman’s legendary rifle.

After spending decades on the frontier as a hunter, trapper, prospector, entertainer, and more, Kinman finally decided to slow things down in California, where he opened a hotel and bar and a permanent mini-museum that chronicled all of his adventures. Among the items in his personal museum was his weathered, storied rifle.

The gun was on display in Kinman’s museum until 1893, when the family sold the contents of Seth’s exhibits. The rifle, however, was not among the items sold. The family retained it and passed it down from generation to generation until Seth’s great-great-granddaughter eventually sold it.

Legacy of a Long Rifle

The chair photographs serve to document the many changes that Kinman’s rifle underwent during its many years of hard use. The current buttplate, toe plate, and lock plate are all replacements that Kinman made later in life. The original lock can be seen in some of the photographs, roughly fitting into a damaged lock mortise.

Kinman’s rifle is pretty much the opposite of a safe queen. Overall, it is in fair condition with a dark brown patina and moderate pitting and oxidation on the iron throughout. Various cracks and repairs are visible on the stock, including a large splice at the toe and a splice around the barrel tang. As you would expect, it has various scrapes, dents, and wear spots. That said, mechanically, it’s just fine, and even the set trigger works. (A set trigger is depressed before the primary trigger, allowing for an extremely light trigger pull when firing for better accuracy.)

Regardless of condition, Seth’s rifle is a remarkable piece of Americana. It is rare to find such a historical object that is also so well documented in photographs, which was actually accidental. The subject of the photos was intended to be the chairs, first and foremost; then, the subject became Seth and his mountain man persona, which would not have been complete without his rifle.

Done in by a Negligent Discharge

In 1888 Kinman met an unfortunate and unglamorous fate. The man who spent most of his life with a gun in his hand suffered a severe injury from a negligent discharge when a shot from one of his rifles struck his leg below the knee.

His leg had to be amputated, and complications from the surgery arose, as they so often did from such procedures in the days before antibiotics. He died in February and was buried in Table Bluff, California.

Mountain man Seth Kinman’s rifle and the tall tales surrounding it and the rest of his life make for one of the most remarkable mountain man life stories of all time, and it comes as no surprise that the title of his autobiography is I’m a Gonna Tell Ya a Yarn.