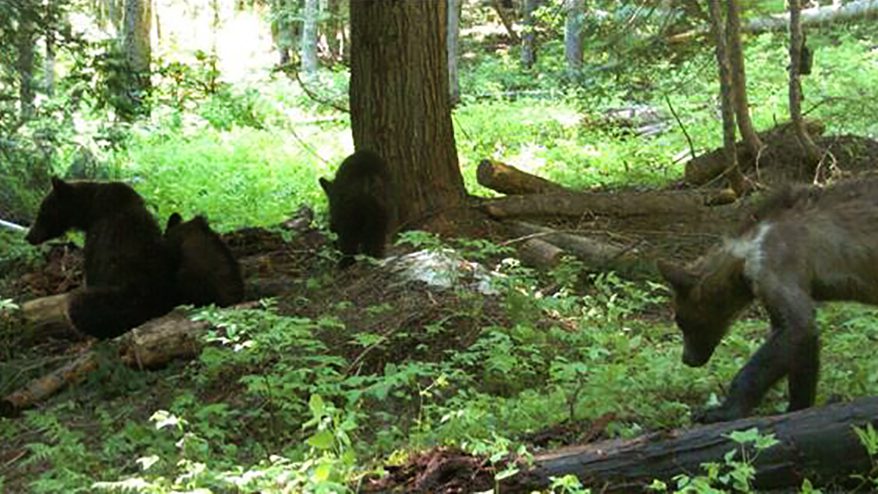 When it comes to playing hard to get, female grizzlies in Washington state are pros. In 40 years of tracking grizzly bears as part of recovery efforts in the Evergreen State, US Fish and Wildlife Service officials have captured and collared four males but never a female. Until now.

The sow was captured in northwest Washington near Metaline Falls, 10 miles from the borders with Idaho and Canada. Biologists fitted her with a collar to track her movements and released the sow to rejoin her three cubs. The cubs hid in the woods nearby while wildlife biologists did a general health check and secured the collar.

Rich Beausoleil, a biologist with the state, said grizzlies had once existed in great numbers across a significant part of the Pacific Northwest.

“Grizzly bears once occupied much of the Cascade and Selkirk Ranges,” Beausoleil said in a recent release. “But their numbers were severely reduced as a result of persecution by early settlers and habitat degradation. Grizzly bear recovery started in 1981 and it took 40 years to confirm the first known female in Washington.”

Biologists first located the sow on trail-cam footage in the Selkirk Grizzly Bear Recovery Zone in a remote area of the Selkirk Mountains, one of six grizzly-recovery zones in the US.

Based on previous images of a sow and three cubs in the same area a few weeks prior and the presence of a natal collar — a white ring around the neck — on one of the cubs, biologists believe the grizzly to be a resident of the area.

Wayne Kasworm, a grizzly bear biologist with the US Fish and Wildlife Service, reported that roughly 70 to 80 grizzlies call the Selkirk Recovery Zone home.

“About half those bears live on the Canadian side of the border,” Kasworm said, “with the other half on the U.S. side.”

Since grizzlies are listed as threatened under the federal Endangered Species Act and endangered in Washington, locating and collaring the first female ever since the recovery program started is a huge deal. Biologists will now have access to brand-new data around grizzly bear survival, reproduction, home range use, food habits, genetics, and causes of death.

In a news release, Hannah Anderson, the Washington Department of Fish and Wildlife diversity division manager, underscored the value of locating the female grizzly.

“Understanding how the bears are using the landscape will aid biologists in advancing recovery of the species,” Anderson said.

In 1975, when grizzlies were first listed as threatened, they occupied a fraction of their former range, and the estimated population in the Lower 48 was less than 1,000. It’s believed that there were as many as 50,000 grizzlies when Lewis and Clark were bushwhacking their way west.

The population in the Selkirk Recovery Zone is considered healthy and is growing at a rate of about 2.9% per year.

Read Next: What You Need to Know About Yellowstone Grizzly Attacks and the Future of Hunting Brown Bears in the West