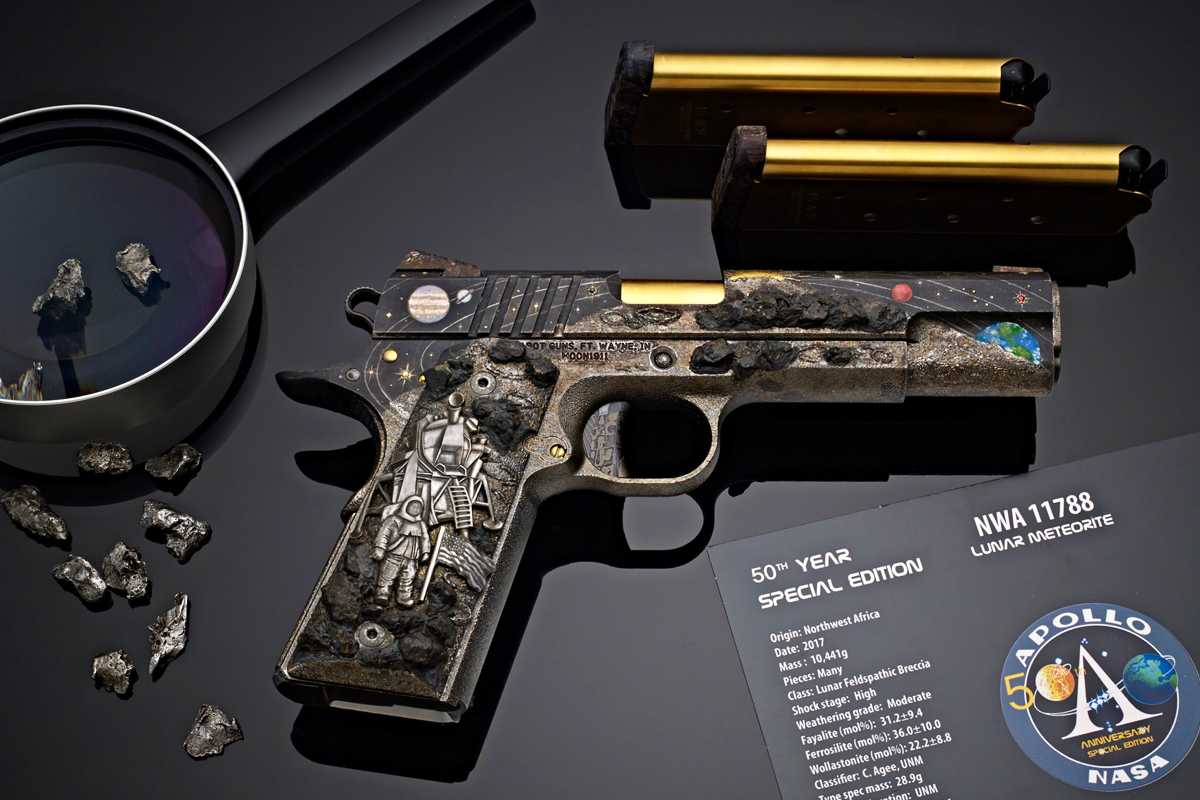 Cabot Guns is about doing things that are different. You won’t catch them following any trends in the gun world, and their recent announcement that they have become the first firearms manufacturer to offer a digital firearm collection via NFTs (non-fungible tokens) shows they are willing to go places others aren’t and to get there first.

This spirit is perhaps best exemplified by their recently debuted Moonshot 1911 pistol, the first gun to also be offered as an NFT. Cabot is all about custom, unique, heirloom-quality 1911s that range from beautiful simplicity to wild and audacious guns made from exotic materials with hours upon hours of painstaking work from expert gunsmiths and engineers who design and build them with aerospace tolerances. They are also works of art.

The Moonshot is, get this, “encrusted with stony fragments of the moon.” Yeah, that’s right. This 1911 is made with actual pieces of THE FREAKIN’ MOON.

Cabot calls this gun the natural successor to its meteorite pistols, dubbed “The Big Bang Set,” which made headlines a few years ago for being almost entirely constructed from a meteorite found in Namibia. The Moonshot pays homage not only to the 1969 moon landing but also to the relationship human beings have had with the moon since the beginning of our existence.

The pistol was crafted using lunar meteorite material and features a detailed depiction of the alignment of Jupiter and Saturn that occurred on Dec. 21, 2020. The alignment is known as the Christmas Star and was dubbed by astronomers as The Great Conjunction. The slide is finished with colored enamel that depicts the two planets next to each other during the event.

A “dynamic view of our solar system — from the perspective of the lunar surface — is captured by the painstaking placement of lunar meteorite, small diamonds, rubies, sapphires, and gold inlay.”

The slide is black to represent the backdrop of outer space for planetary orbits, shooting stars, and meteorites rendered by Lee Griffith. The grips featuring astronauts and an Apollo program lunar lander were cut out of steel plates, sculpted, and then welded into place.

Iron meteorite material estimated to be 4.5 billion years old was used to make the front and rear sights, and the magazines are gold.

“With the Moonshot, Cabot has created a unique connection between the most iconic firearm on the planet — the 1911 pistol — and the pinnacle of engineering and scientific achievement: the lunar landing,” the gunmaker says.

So which parts of the gun are actually pieces of lunar meteorite?

“Some people have been asking which parts of the pistol are lunar material, and the answer is all of the rocks jutting out,” Cabot said on its FB page. “Lee Griffiths was able to (use) the natural surface texture of the lunar meteorite that landed in northwest Africa to mimic the lunar surface. The engraved images of Neil Armstrong and the American flag are planted on actual bits of the moon.”

Cabot’s website says the gun was priced at $250,000 and the company’s Facebook page revealed that the gun has indeed been sold. A price like that is to be expected for a one-of-a-kind collector’s piece like this. If that blows your gun budget a little bit, maybe you can one day buy a Cabot Guns NFT. According to Cabot, the Moonshot NFT has already been minted on the blockchain for digital collectors.

“Cabot Guns is proud to be at the forefront of using the 1911 as a platform for modern art, and we are excited to announce that digital gun collections with real and tangible value are now possible,” said Cabot Founder and CEO Rob Bianchin.

If the mere mention of NFTs, blockchains, and cryptocurrency makes your eyes go glassy and your hand twitch, this will help you understand it all a little better, maybe.

Beginning with the Moonshot, Cabot digitized select models in its custom 1911 pistol collection and made 22 NFTs available for purchase on Jan. 15. The company is now a verified NFT issuer.

The NFTs were minted using the OpenSea platform and, when purchased, “each NFT will reside within the provenance of the Ethereum blockchain.”

READ NEXT – Most Expensive Guns: The 6 Priciest Firearms Ever Sold at Auction