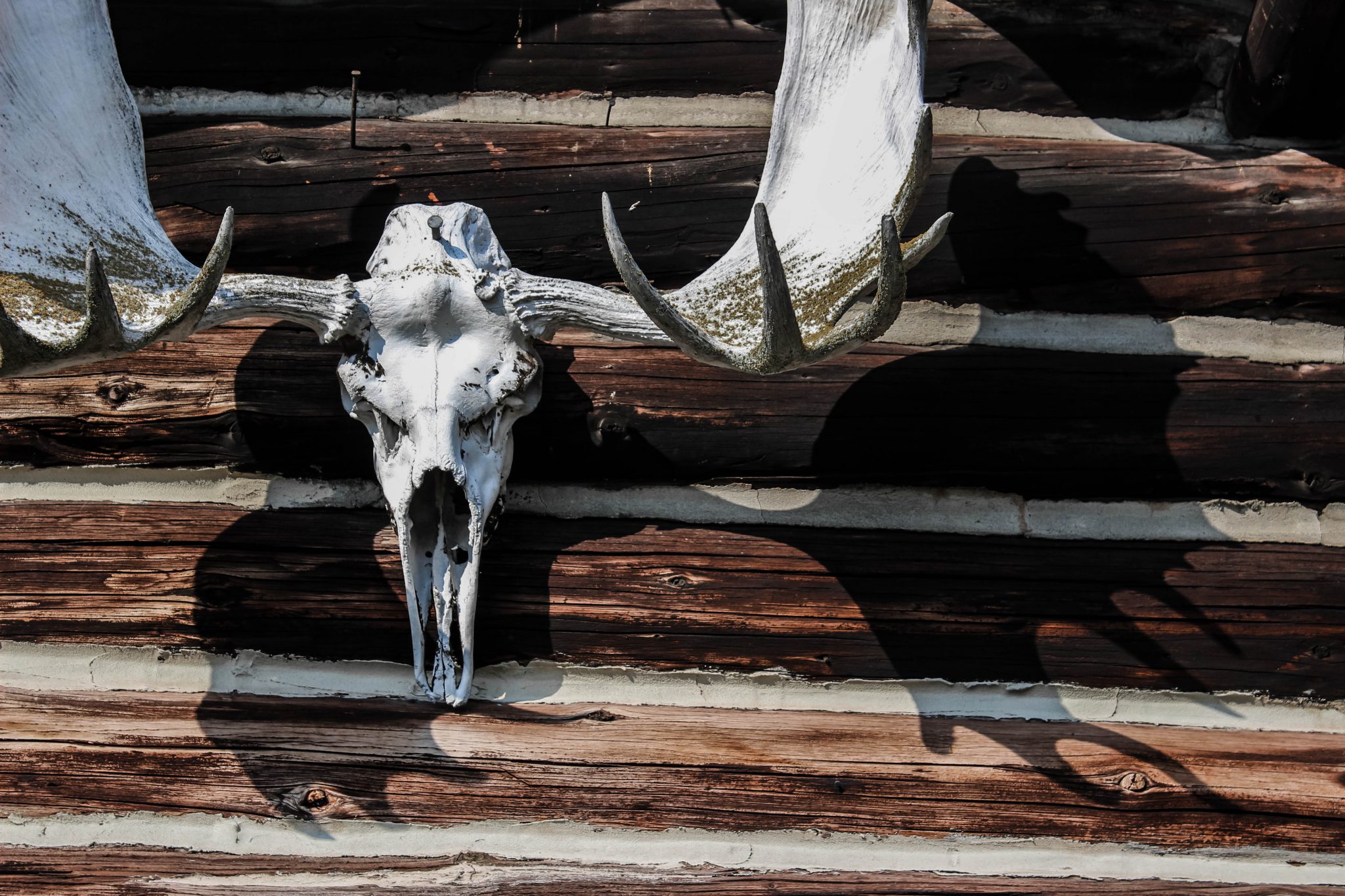 Packed with all the gear we’d need for a backcountry Alaskan moose hunt, my uncle and I made the long trek from Arizona up to Watson Lake in the Yukon Territory. It was my first hunting trip outside the contiguous United States. Excited doesn’t begin to describe how I was feeling.

Watson Lake has a total population of 790 people. It is one of the last towns you encounter before venturing off into the wilderness. We traveled 80 miles further into the wild by floatplane to reach our camp for the hunt. This is where our adventure began.

Day 1 was glorious. It was 50 or 60 degrees Fahrenheit with the sunshine beaming down on us. We stayed in cabins, built by our guide 20 years prior, on the shore of an inland lake. We didn’t know it at the time, but the cabins were going to be our safe haven by the end of the trip.

Since we flew in, we brought some supplies for the four days — everything from a propane tank to canned vegetables and some personal gear we always take hunting. We were all in high spirits and excited to get started.

We used small metal-hulled boats to get around the lake and find a good fishing spot. We also ventured off and started hiking around the different areas. Not even two hours in, we spotted a small bull moose with a cow and calf. He was too young, so we moved to a different spot.

On the way there, we saw a stout bull. My guide asked if I was confident taking the shot from the boat. He was worried if we got to land, we might miss our opportunity. Luckily, the lake was somewhat calm, but I was still looking at a 180-to-200-yard shot. I knew my rifle and my capabilities, and I told him, “I was ready.”

We slowed down to idle and I prepared for my shot. BOOM!

The shot from my .300 Weatherby Mag flew through the air and connected with the moose. He dropped immediately — a through-and-through lung shot about an inch below the heart. We hurried ourselves to the shore to dress the moose.

RELATED – Bear Attack: Killing a Charging Giant at 5 Yards in the Alaskan Backcountry

It was 5:45 p.m. and the sun was due to set at 7:30. This was my first time field-dressing a moose, but we worked efficiently and got everything done just as the sun went down. Our boat was just inches over the waterline, and we used headlamps to get back to camp in the dark. It was a movie-like ending to the first day.

Days 2 and 3 were pretty mundane. We cruised around the lake stalking the carcass to see if we could catch any wolves trying to get an easy meal. We found some tracks and a den, but wolves are elusive, and I never put my eyes on them.

We went back to camp and prepared firewood, checked the perimeter for bear and wolf tracks, and cleaned up the meat and skull from the moose. We explored and did anything we could do to pass the time. There were some random containers we stored water in. I brought a hand pump that could filter the water.

Also, we had a deck of cards and dice, so we played hundreds of games. While I was content to hunt in such a remote area, I was also somewhat nervous being so far from civilization. If something bad happened, we were all on our own until a full-blown rescue mission could be executed.

Day 4 took a turn for the worst — it didn’t stop snowing. The nice sunny weather was gone and six inches of snow dumped down in just a few hours. The attitude of the guides changed quickly — we needed to prepare more firewood and adjust our caloric intake. My uncle and I didn’t think much of it. Maybe it was going to last only that day and we could get a floatplane the next.

Our guide was worried that a storm cell was moving faster than predicted and we would be snowed in for a long time. Our guide was right. The next seven days put our mental strength to the test.

Days 5 to 10, the snow did not stop. Our only means of communication was a satellite phone that was supposed to be charged from a portable solar panel. Our issue was that the sunlight couldn’t penetrate the thick clouds full of moisture. We would periodically turn the phone on and call back to Watson Lake to check the daily weather status.

A second storm cell approached our camp, and the lake was between these cells — causing temperatures to drop and the sky to not let up. We were still in good spirits for the first few days of cabin lockdown. We read about every book we all brought and typically ended up sharing stories while sitting around the cast-iron heater that warmed the cabin.

Around the sixth day, we started running low on supplies. No more coffee, no more butter, no more vegetables. We started eating the moose we shot for breakfast, lunch, and dinner. We did have some flour, and we made it into bannock, which is a flatbread the Inuits were known to make.

Our main objective was to get the phone charged, so we could start reaching out to the local authorities and floatplanes in the area. At this point, we didn’t know if the storm was going to be over tomorrow or in a week. It tested our mental fortitude knowing our time in the Yukon was unknown.

It got to the point where we were taking the boat around the lake, trying to get enough sunlight for the solar panel to give us a minuscule amount of charge on the phone.

Every day we would wake up and pack our equipment just in case that was the day the plane would come. If there was no plane by 3:00 p.m., we knew it wouldn’t happen that day. We would unpack our sleeping bags and get back to our severe cases of cabin fever.

On day 11, we connected with the air traffic controller in Watson Lake, and they said, “Conditions are only getting worse.” They were predicting a whiteout for the next few weeks. A FEW WEEKS!

We started to get very uneasy with the fact that we were going to be out there for a serious chunk of time. We started talking about options, including trekking 80 miles by foot through the wilderness but decided it would be too risky with the terrain. We would have to cover up.

We unpacked our rucks completely, got back to preparing firewood, and filtered more water. We then accepted the fact it was going to be a while before we would be home again. In the afternoons, we would all nap. As silly as that sounds, it was a great way to pass the time when there was nothing else to do.

It was right around 3 p.m. when we heard it. A roaring engine from a DHC-2 Beaver floatplane. I thought I was dreaming until I looked outside. There it was, right in the sky, performing a corkscrew maneuver to land on the lake. I woke everyone up. We rushed to pack our bags. We knew this was our ticket out of there.

A plane from the 1950s doesn’t have the same amenities of a modern airplane. Our bush pilot could only rely on herself to fly the plane and see what was in front of us. What was most nerve-racking about this was that there almost was no visibility.

She recommended not flying because, at any moment, we could be completely blind between the sweeping evergreen hills of the Yukon. We didn’t care because we knew it was now or sometime in the unknown future. We loaded up the plane as fast as we could and with as much as we could fit in the fuselage. We were close to the max weight capacity, and we could tell the plane was heavy during takeoff.

During the 1.5-hour flight back to Watson Lake, the plane would drop and dive due to worsening weather conditions. After landing, we bought the bush pilot an entire case of liquor, gave her a cooler full of moose, as well as a generous tip because she risked her life to pick up a couple of hunters.

This was an experience I will always remember. No matter what, I will always bring supplies for the worst-case scenario. You never know what Mother Nature will have in store for you, and you must be prepared.

This content was originally posted by Fieldcraft Survival in July 2020.

READ NEXT – Backcountry Flyers: 6 Classic Bush Planes That Get us Out There