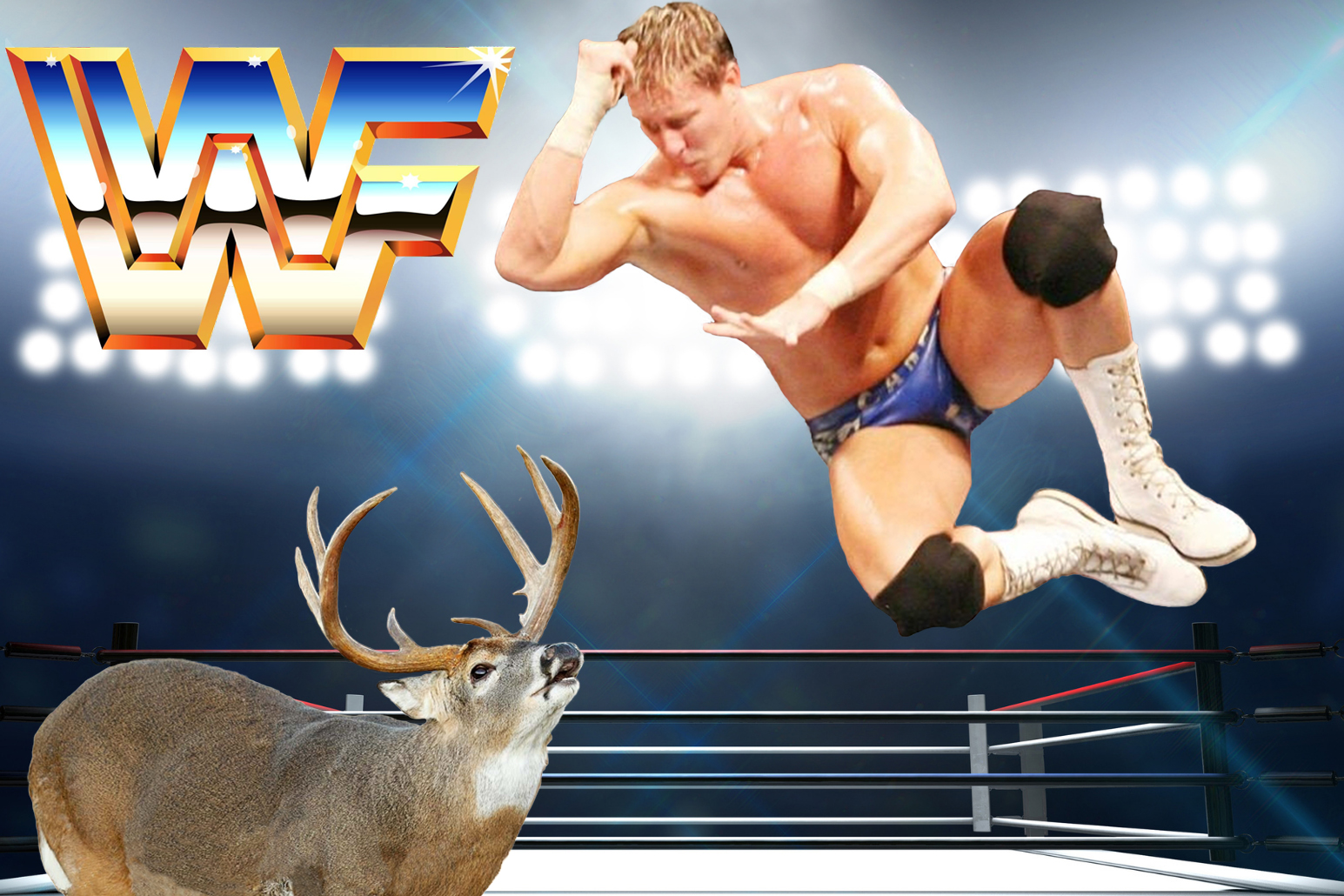 Imagine Macho Man Randy Savage in the deer woods, dropping a top turnbuckle Atomic Elbow on an unsuspecting buck from his stand while snapping into a Slim Jim.

Or Hulk Hogan in a sparkle boat wailing a hookset on a big bass with an Ugly Stick, “Oooooooh, that’s a hog, brotherrr!”

Maybe even Andre the Giant hip-tossing a charging grizz in Alaska, grabbing three king salmon in one swipe and then sucking down 156 beers back at camp afterward.

Sadly, none of these three wrestlers actually hunted or fished, but there are six 80’s-era WWF legends who love to leave the fluorescent tights in the locker room, grab their camo, and head for the great outdoors.

The late Virgil Riley Runnels Jr. was a three-time National Wrestling Alliance Champion, World Six-Man Tag Team Champion, WWE Hall of Fame inductee, and loved deer hunting. As you might expect, he passed both his love of hunting and professional wrestling to his son, Dustin (AKA The Natural). The American Dream lives on, even though Rhodes passed on in 2015.

Michael Shawn Hickenbottom retired his championship belt for bullets and broadheads in 2010. The Heartbreak Kid hunts all over North America and has a TV show that just returned to the Outdoor Channel after many years off: MacMillan River Adventures.

Making the move from taking souls in the ring to taking souls in the woods seems like a fitting transition for the wrestler who still gives people nightmares even after retirement. On the Joe Rogan podcast, Callaway talked about life after wrestling.

“Right now, my goal is to be the best outdoorsman I can be at this point,” Callaway said. “I’ve always loved hunting and fishing and doing all that, I just haven’t had time.”

Hailing from Jackson, Mississippi, Ted DiBiase is a big-time deer hunter and outdoorsman — something he passed onto his son Ted Jr., who is also a professional wrestler and father. While grandpa “Big Daddy” DiBiase’s knees and back keep him from being as active as he’d like, Junior plans on helping his dad fish with grandson Tate.

Son of OG wrestling great Larry “The Axe” Hennig, and father of wrestlers Curt Axel and Amy Hennig, Curt Hennig has the longest AWA Wrestling title reign at 373 days. Hennig found a hunting and fishing partner in his buddy and baseball superstar Wade Boggs. They’ve traveled together from British Columbia for moose to Iowa for whitetails. Hennig even saved Boggs’ life after he got tangled in a barbed wire fence on a hunt.

A WWF legends hunting list wouldn’t be complete without Stone Cold. Born Steven James Anderson in Austin, Texas, the wrestler’s persona in and out of the ring was pretty much what-you-see-is-what-you-get: red-blooded, beer-drinking, rattlesnake-mean American country boy. It’s not much of a surprise that he’s a lifelong hunter and outdoorsman. He lives in Nevada on Broken Skull Ranch, has a TV show, and a line of hunting knives.