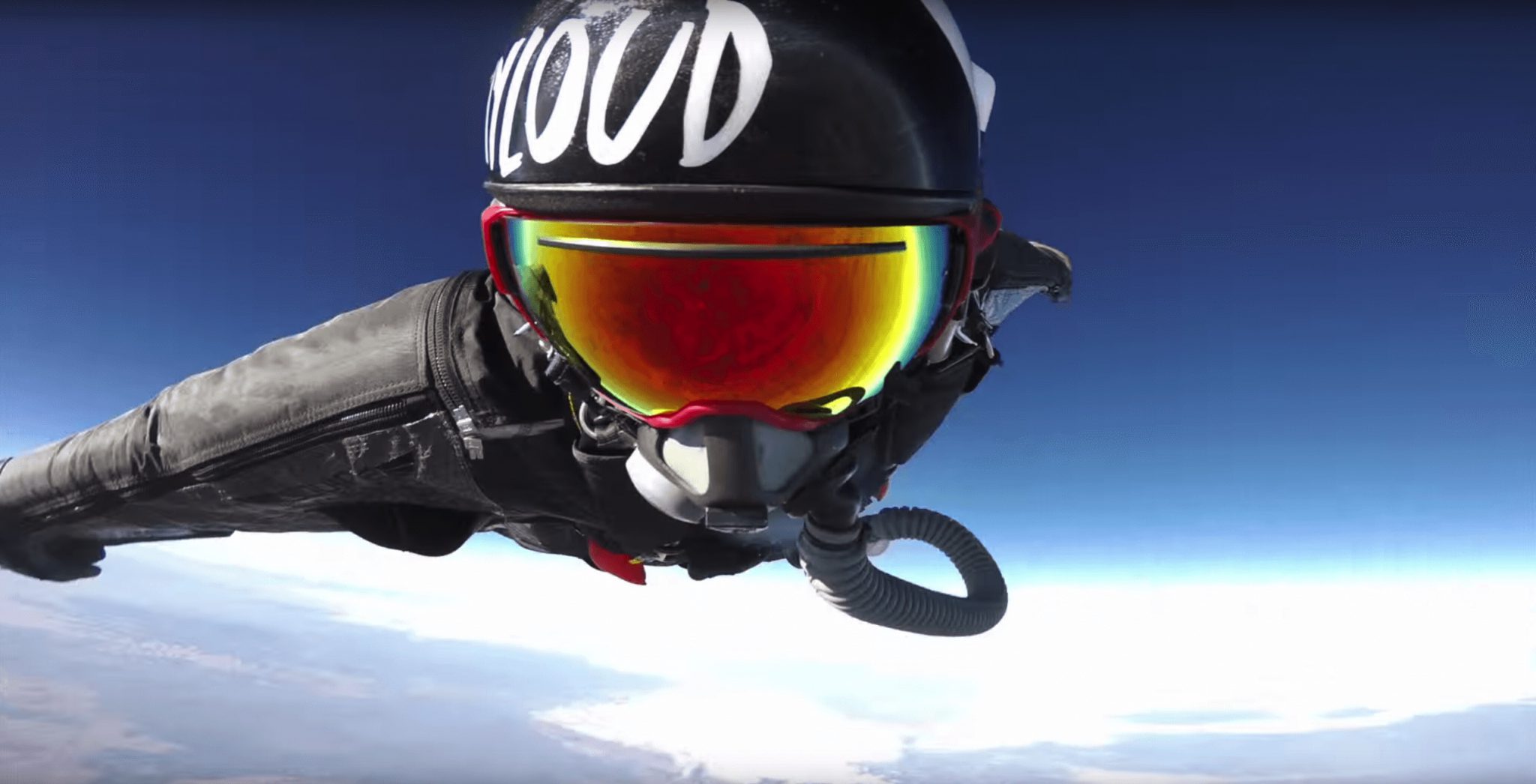 In 2015, Andy Stumpf, a retired Navy SEAL, broke the standing world record for absolute distance flown in a wingsuit, covering 18.257 miles and falling 36,500 feet. It was a hell of an accomplishment, considering he volunteered for the undertaking having never once put on a wingsuit in his life.

While a typical wingsuit flight starts with a jump altitude of about 13,000 feet and lasts maybe two minutes, Stumpf’s wingsuit jump necessitated an altitude of 36,500 feet — the altitude at which commercial jetliners typically fly — where the temperature is about minus 60 degrees. He was in the air for eight minutes.

The plane he jumped from was a custom, highly modified Cessna Caravan with everything stripped out other than the pilot, the oxygen bottle, and an oxygen tech, he said.

The thing about flying in a wingsuit is you have to keep your body in a rigid isometric hold the entire time while going about 140 mph through a 150-degree temperature swing. To understand what that’s like, grab a 5-pound dumbbell in each hand and hold it at a 45-degree angle for eight minutes.

“You’re trying to make your body into — if you look at the cross-section of an airplane, there’s all sorts of ribs and structural support — well, your body is creating that inside of this nylon suit,” he said on the Free Range American podcast.

So how did a former SEAL get involved in setting a wingsuit record? It was all for a good cause.

After a career with CrossFit, Stumpf began doing contract training for the US Air Force, providing additional training to pararescue jumpers (PJ) and combat control technicians (CCT) at the end of their pipeline.

“I was doing a lot of ‘this is how you actually exit an airplane in flight’ and working on body skills in the wind tunnel,” he said. “After that, I started jumping the way I wanted to jump, as opposed to — in the military you just jump when you are told to jump. You know, I couldn’t BASE jump when I was in the military, and I got into that after I got out.”

Later, Stumpf said, he was working with energy drink company Kill Cliff when a conversation started among colleagues about a wingsuit jump and trying to set world records. “So they were like, ‘Hey, you think you can beat the world record?’ And I was like, ‘Yes, let’s do it,’” Stumpf said. “Mind you, when I told them this, I had never actually put a wingsuit on.”

So what did he do? Keep in mind, this is a guy who did jump training on the side while he was in the SEALs so he could qualify for free-fall jumps sooner. He also got his pilot’s license and was rated to fly pretty much anything in the sky in record time.

“I started flying the shit out of wingsuit,” he said on the podcast. “I found some really good mentors and just trained really hard. In the span of about eight or nine months, I was able to go and throw the suit on and, you know, pull it out of my ass. Barely.”

That is to say, not everything went smoothly, and he almost pulled his chute a little too late.

“The plane was at full speed, obviously, because the air density [at that altitude] is so much thinner, and I was wearing a ridiculously large suit at the time for my skill level, and just completely got rag-dolled going out the door, pulled that out of my ass, and then pointed my head toward the rising sun and was hoping for the best,” he said.

He wasn’t wearing an altimeter, either.

An altimeter “would had to have been external on the lift web, and I was wearing an O2 mask and I thought, in my mind, given my luck, my O2 mask will somehow wrap around that and I’ll turn my head and rip my mask off at 30,000 feet, and then it will turn into a real shit show,” he said. “So, I’m like, I’ll just wear two audible altimeters, one on each side of my helmet, right? What could possibly go wrong?”

Stumpf said he set up a series of beep alerts that would let him know his altitude, including one to let him know when to pull his chute. He didn’t hear that last one.

“It did work for a while, and then maybe I didn’t hear the one at pull altitude,” he said. “But I had just gotten back not too long before then from a trip to Switzerland where I was BASE jumping, which is completely visual, so you get used to kind of judging distance based off your eye.

“So I’m just flying along and was like, goddamn, those trees are getting big. I’ve had enough, and I pulled. I was well under the USDA guidelines for main deployment altitude and yeah, I mean, I don’t know. Not the best.”

The record for absolute distance traveled in a wingsuit jump includes the distance covered after the jumper’s parachute has opened. The stunt funneled attention to a GoFundMe campaign working to raise $1 million for the Navy SEAL Foundation Survivor Support Program.

Unfortunately, Stumpf’s record only stood for a few months until it was broken by Kyle Lobpries, a Marine Corps helicopter pilot, in May 2016 with a distance of 19.94 miles.

Is there another record Stumpf has his eyes on? Yeah, but it’s a little more complicated.

“What I want to do is, like, get a balloon that can go to 80,000 [feet] and get like a partial-pressure spacesuit and a big wingsuit and see if I can make it all the way across, like, a state,” he said.

If that happens, you can bet your ass Free Range American will be there to document the whole thing.

Read Next: 7 Best Places in the US to go Paragliding and Hang Gliding