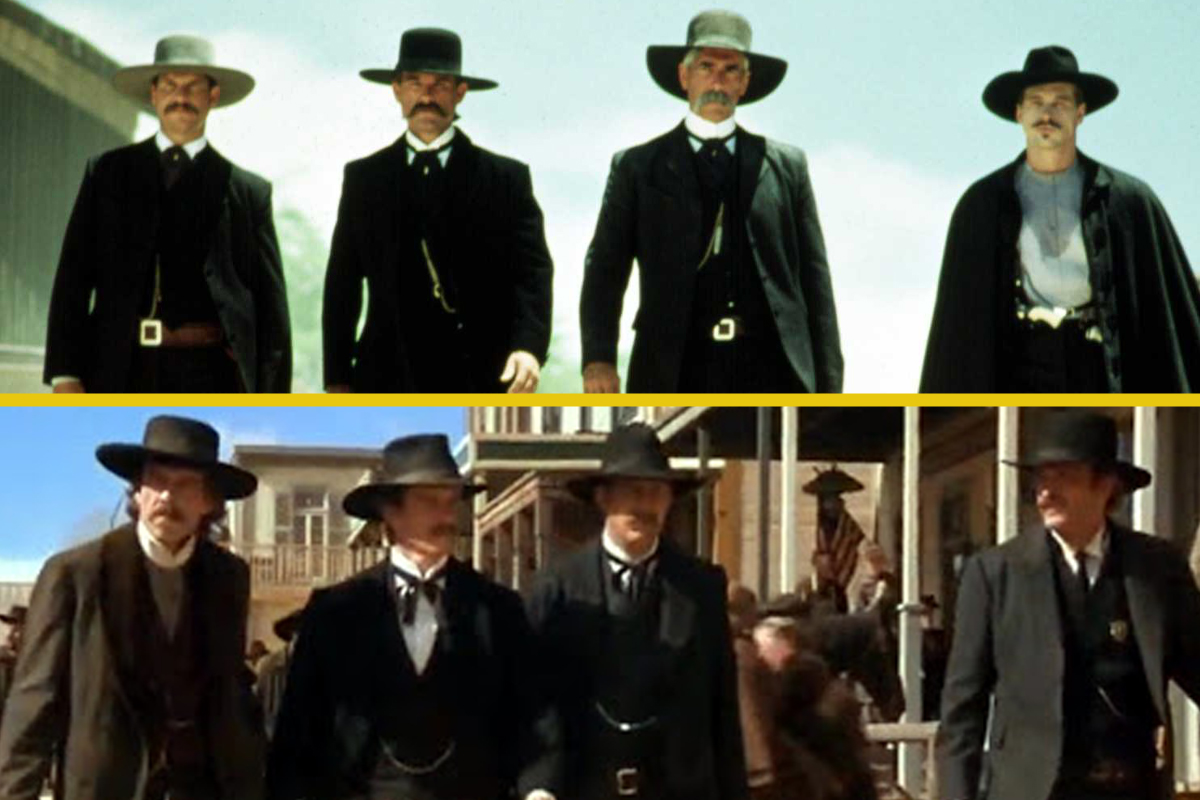 Back in the 1990s, a weird thing happened in Hollywood. Movies with incredibly similar plots were made and released at almost the same time — with one inevitably tanking and the other being a box office smash. We’re talking about ‘Wyatt Earp’ and ‘Tombstone’. Sometimes, years later, people realized that the flop was actually the better movie. And sometimes not.

We had the unlikely duo of Tommy Lee Jones and Anne Heche battling oddly aggressive and sentient volcanoes all over Los Angeles in an uninspired movie with the even more uninspired title of Volcano (1997). It went up against another volcano movie the same year: Dante’s Peak (1997) starring Pierce Brosnan and Sarah Connor — I mean Linda Hamilton. Neither of these were really that good, but special effects were in a place that made the volcano stuff look pretty damn good most of the time.

We also had the Michael Bay one-liner fest Armageddon (1998) going up against Deep Impact (1998), both with star-laden casts and both about a world-ending galactic projectile hitting Earth. They even had similar plots about a spacecraft attempting to plant a nuclear bomb on the asteroid/comet to divert or destroy it. While Armageddon was more of an action movie, Impact was more thoughtful and dealt more with the months leading up to the impending catastrophe and how people behaved and reacted emotionally, rather than Steve Buscemi firing off a laser Gatling gun in space. Deep Impact notably did not have a theme song from Aerosmith, either, so it tanked.

Yet, the very first of these weird 1990s parallel movies was maybe the best pairing: Tombstone and Wyatt Earp, released within a short six months of each other.

Return of the Western

It was the early 1990s, and Kevin Costner was king at the box office. In 1989 he starred in the sappy baseball classic (I’m not crying, you’re crying) Field of Dreams, and the following year he carried the Academy-darling Dances with Wolves, which also helped bring back the Western to big-budget Hollywood as a viable genre, bolstered a couple of years later by Clint Eastwood’s Unforgiven.

With those two successes bringing home gold statues, it’s no wonder Hollywood was eager for more updated Westerns by 1993, and at the time, Kevin Costner could do no wrong. Waterworld hadn’t happened yet. So, he decided to create a saga from a story that had been told many times before, but reimagined as a big-budget Western that was more gritty and more realistic than anything that had come before it.

Costner would play legendary lawman Wyatt Earp in a story that would follow the icon of the American West from his teen years through young adulthood, his legendary career as a lawman in Dodge City, and finally as an investor and saloon owner in Tombstone, Arizona, with the latter part of the film dedicated to the events leading up to and following the Gunfight at the OK Corral.

Dennis Quaid completely transformed himself, losing a ton of weight, to play tuberculosis-afflicted Doc Holliday more authentically, and the cast boasted Gene Hackman, Jeff Fahey, Mark Harmon, Michael Madsen, Bill Pullman, Tom Sizemore, and a young Jim Caviezel. However, Costner and Quaid were the biggest stars on the bill, and it was clearly Costner’s movie.

At the same time, more of an ensemble film was being made, also about Wyatt Earp and attempting to bring his story to modern audiences — but like many Westerns of yore, this one was not aiming to be a sweeping epic but a punchy, stylized action movie. It would begin not with Earp (Kurt Russell) as a teen, but when he and his brothers Morgan (Bill Paxton) and Virgil (Sam Elliot) first arrive in Tombstone.

Tombstone ended up hitting theaters first, six months before Costner’s Earp. But not everyone was confident that just because it got to audiences first that it would be a success, especially after the movie’s difficult production that saw the original director fired. Elliot told Entertainment Weekly the oft repeated rumor that star Kurt Russell ended up directing most of the movie.

The movie’s writer, Kevin Jarre, helmed the director’s chair for the first month of filming, but was not up to the task at all, according to Elliot. He was then replaced with George P. Cosmatos, some say after Sylvester Stallone urged his friend Russell to do so. Cosmatos had directed Stallone’s Rambo: First Blood Part II (1985).

“…then they replaced him with George Cosmatos. Kurt was right there on top of it. He was orchestrating a lot of it. He held it together after Kevin got taken off of it,” Elliot said.

But the turmoil didn’t ultimately matter, and whoever held the production together, the movie worked. The script was tight and well paced, and the cast was un-fucking-believable. It is easily one of the 10 best Westerns of all time.

Along with Russell as Earp, it has Bill Paxton playing Morgan Earp, Elliot as Virgil Earp, Val Kilmer in one of, if not the best role of his career as Doc Holliday, Powers Boothe as Curly Bill Brocius, Michael Biehn tearing it up as Johnny Ringo, Stephen Lang as the wild-eyed and oft-wasted Ike Clanton, Jason Priestley, Billy Zane, Thomas Hayden Church, Dana Delany, Billy Bob Thornton, and even Charlton goddamn Heston. And Frank Stallone! No seriously, Frank Stallone is the dude Doc Holliday stabs during the poker game in the very beginning.

So Which Is Better?

Judging which film is objectively better a quarter century after the fact depends on what you’re looking for.

As far as the box office goes, Tombstone made three times as much as Wyatt Earp, which was really Costner’s first flop. This might largely have been due to simple confusion among audiences. This was back in the days before IMDB.com and most of the Internet in general. You’d hear on Entertainment Tonight that a Wyatt Earp movie is coming out and you’d be like, “I thought they just did one of those. Whatever.”

They were also very different types of movies, even though they were both Westerns. Tombstone wasn’t anemic by any means, coming in at just over two hours to tell a considerable story, but it was energetically paced and had a tight story, while Earp was more sprawling and ruminating, boasting a runtime of well over three hours. And you have to remember, this is before the days of never-ending movies about Hobbits and superheroes. Anything over two hours was asking a lot of audiences. When Earp came out on home video, it was on two VHS tapes in a giant box because it couldn’t fit on one.

Earp attempted to be a sweeping biographic epic about the remarkable life of one man. In many ways, it totally succeeds and there are some memorable parts for sure, like Earp working as a buffalo hunter on the plains for a time where he first meets another legendary lawman, Bat Masterson, and when he first becomes a lawman and helps clean up Dodge City through some heavy-handed means, twice. That was cool as hell and hadn’t been seen rendered with anything that resembled an attempt at realism up to that point.

But there are a few things that hurt it.

First, the way Costner depicts Earp is a great take on the character, but it’s depressing and almost joyless to watch for the bulk of three hours. He’s a happy-go-lucky young man in the beginning. Even a bit reckless. But all the joy is driven out of him when his young wife dies of typhoid while expecting their first child. He burns down their house and commits to drinking himself to death, until his father saves him from being hanged in Arkansas as a horse thief in a really great piece of acting from Hackman.

“You think you’re the first man to lose someone? That’s what life is. Loss. But we don’t use it as an excuse to destroy ourselves. We go on. All of us. Even you, Wyatt.”

From then on, Earp is completely sober, and a grim, dour, angry man — increasingly so as he ages. Even when he falls in love with Josie in Tombstone, he hardly cracks so much as a smile. It’s a really cool way to play Wyatt Earp, but he’s just difficult to like on a first viewing.

This would have been muted a lot if he were surrounded by more dynamic, emotional characters, but other than Quaid chewing up the scenery whenever he can, the other performances are kind of lackluster and one-note throughout.

The second problem: The latter half of Wyatt Earp is the same damn movie as Tombstone, from when the Earp brothers arrive in Tombstone (right about where you’d switch to the second VHS tape) and through Wyatt’s famous Vendetta Ride against the gang that shot his brothers after the infamous OK Corral gunfight. They are so similar that there are several instances where the two movies provide two versions of the same scene, and in almost all cases, Tombstone does it better.

And the last point … Tombstone is much more fun and full of energy. Instead of telling the story of Wyatt Earp, it tells the story of a feud between the Earp brothers and a gang of outlaws during a particular piece of time in a particular Arizona mining town, and while Earp is the main character complete with a love interest, it really is an ensemble movie with the other Earps, Holliday, and their adversaries getting lots of screen time and development of their own.

Tombstone is cool, and it knows it. The actors all have a heavy swagger going and the costumes, while not as bombastic as older Westerns, certainly are more stylized than what you see in Earp, as are the gun belts, firearms, and gunplay — but it’s not over the top. There’s also a lot of boasting and big talk, and a parade of great one-liners.

Tombstone may not be as historically accurate or realistic from a gunfighter perspective, but from the dialogue (especially Kilmer’s) to the action and even the humor, Tombstone is just a blast to watch and rewatch.

Now, I’ve seen both movies many times, and sometimes I certainly am in the mood for Earp and there are a few bits in there that I like and wish Tombstone would have depicted, like the existence of James Earp — but when set against scenes in Tombstone like Wyatt beating the crap out of Billy Bob’s Faro dealer, the last ride of “Wyatt Earp and His Gang of Immortals,” the awesome rendition of the most famous gunfight of the Old West, and pretty much every damn scene Kilmer is in — the dour and drawn-out Wyatt Earp just doesn’t stand a chance.

Was the real Wyatt Earp probably more like Costner’s portrayal of him than Russell’s? Probably. But it’s a whole lot easier to like Russell’s version.

I’m your huckleberry. Both films are great, but Tombstone is the best, most fun, and most rewatchable. If I want to watch a documentary on Wyatt Earp, that’s what I’ll watch over Earp.