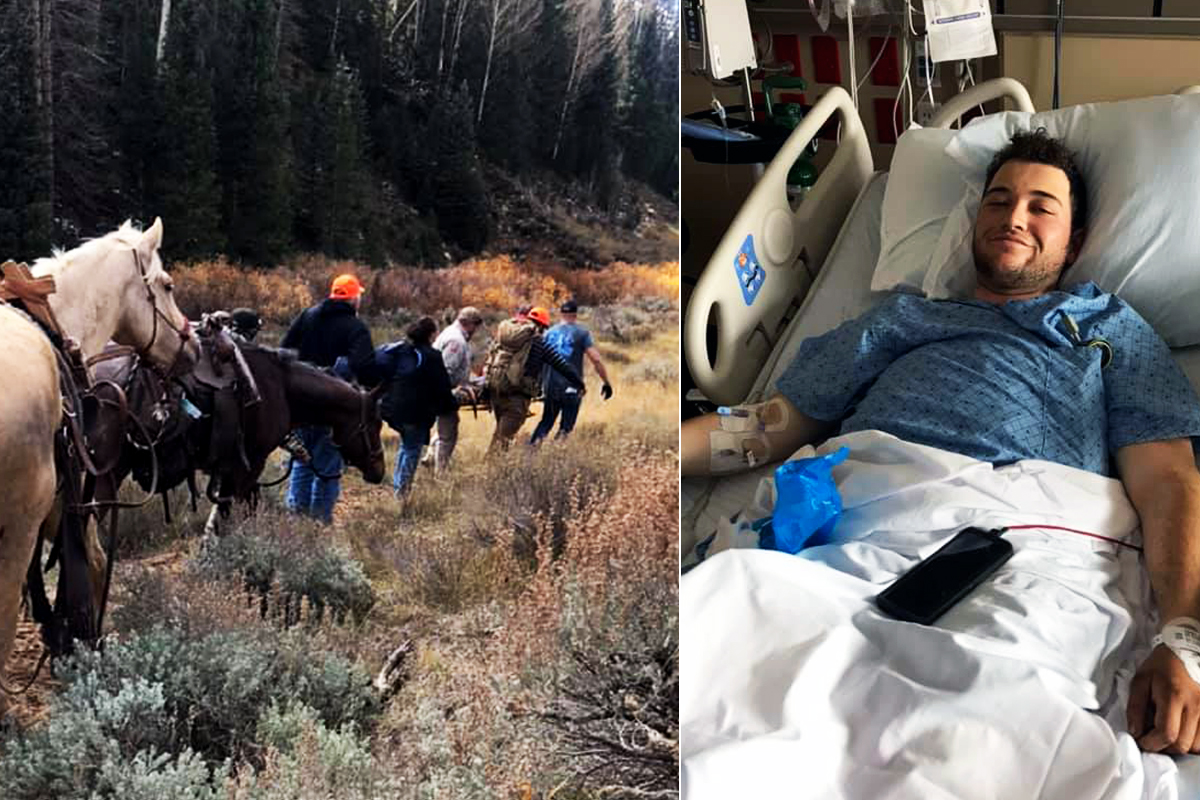 Utah hunter Coy Kummer hoped to end his elk season hauling out a big bull. Instead, it ended with a broken leg, a wild rescue, and several major surgeries.

On Oct. 10, 22-year-old Coy and his father, Brian Kummer, were hunting the northern Utah mountains near Spanish Fork when they stopped to offer a helping hand to a fellow elk hunter. After filling his tag, the elk hunter needed some help packing out his bull. Coy and Brian were willing to lend literal horsepower to help him do it. But, when they loaded up Coy’s horse, one of the bull’s antlers jabbed the animal’s flank.

The spooked horse tried to bolt, but Coy instinctively stepped in front of her to reach for her halter. Coy’s efforts failed, and the horse ran over him, trampling his right leg in the process.

“I turned around to see where the horses were going, and I see Coy standing, and he says, ‘I can’t feel anything in my leg,’” Brian said. “I could see his leg, and I could instantly tell his leg was broken.”

Justin Brimhall and Chuck Lawrence are conservation officers with the Utah Department of Wildlife Resources who were working in the Huntington Canyon area when they received a call from dispatch briefing them on Kummer’s call for help. The SOS message provided the Kummers’ location and let officers know an individual had been in a horse accident and sustained a severe leg injury.

Lawrence and Brimhall immediately went into action. They drove to the closest access point, where they found Coy’s father waiting for them at the trailhead. Brian later commented on Facebook that the two officers arrived at the trailhead 45 minutes after he sent the SOS. The officers first navigated the trail on an ATV. When the canton narrowed, they proceeded on foot.

Lawrence said it was obvious Coy’s injuries were severe as soon as they got to him.

“We could immediately see that Coy’s right leg was significantly injured,” Lawrence said. “There was a crease in the skin where his kneecap should be located, and he was in obvious pain.”

Although a helicopter was circling, ready to transport Coy, the officers felt landing in the narrow canyon in windy conditions would be unsafe. So the officers acted quickly to stabilize Coy and get him off the mountain and to a hospital as fast as possible in a race against time to save his leg. But that meant hauling the badly injured Coy across some rough country on foot.

They used Brimhall’s small roll-out splint from his small medical kit, the officer’s belt, and straps from the horses’ tack to lash Coy’s legs together.

“Walking on either side supporting Coy in the middle wouldn’t work on the narrow, rough trail, so I ended up giving Coy a piggyback ride,” Lawrence said. “Others in the rescue party helped support his legs so he didn’t get further injured by hitting bushes, rocks, etc. while being carried out.”

Coy endured a rough trip out of the canyon until the group met Emery County Search and Rescue. From there, Coy was strapped to a backboard. He rode out on the back of the ATV to the trailhead where an ambulance waited to transport him to the hospital.

“During the entire time we worked to stabilize and transport Coy, we recognized that he was one tough dude,” Lawrence said. “Although he was fighting obvious pain, he was polite and we tried to keep his spirits high by joking with Coy about trash-talking game wardens.”

Coy was rushed to surgery after arriving at Utah Valley Hospital, where doctors attempted to save the young man’s leg.

“The horse stepped on his femur, which dislocated his knee. The dislocation of his knee had completely severed the peripheral artery in Coy’s leg, completely closing the blood flow to his lower leg,” explained Brian Kummer in a Facebook post.

Coy wasn’t expected to come out of his initial 6-hour surgery with his leg intact. Fortunately, doctors were able to save his limb and avoid amputation.

“There were several factors in Coy’s favor for a good outcome,” explained Lawrence. “Although the Kummers were outside cellphone reception where the accident occurred, they did have a beacon, and Brian wisely sent an SOS signal when he recognized the severity of Coy’s injury. We were fortunate to be already working nearby and were able to reach the trailhead relatively quickly.”

Coy would endure two more surgeries during his five-day hospital stay. He also has at least one more knee surgery ahead of him, but doctors expect he will be back on his feet in the next three to six months.

Whether he’ll be up to filling his elk tags next season is yet to be determined.