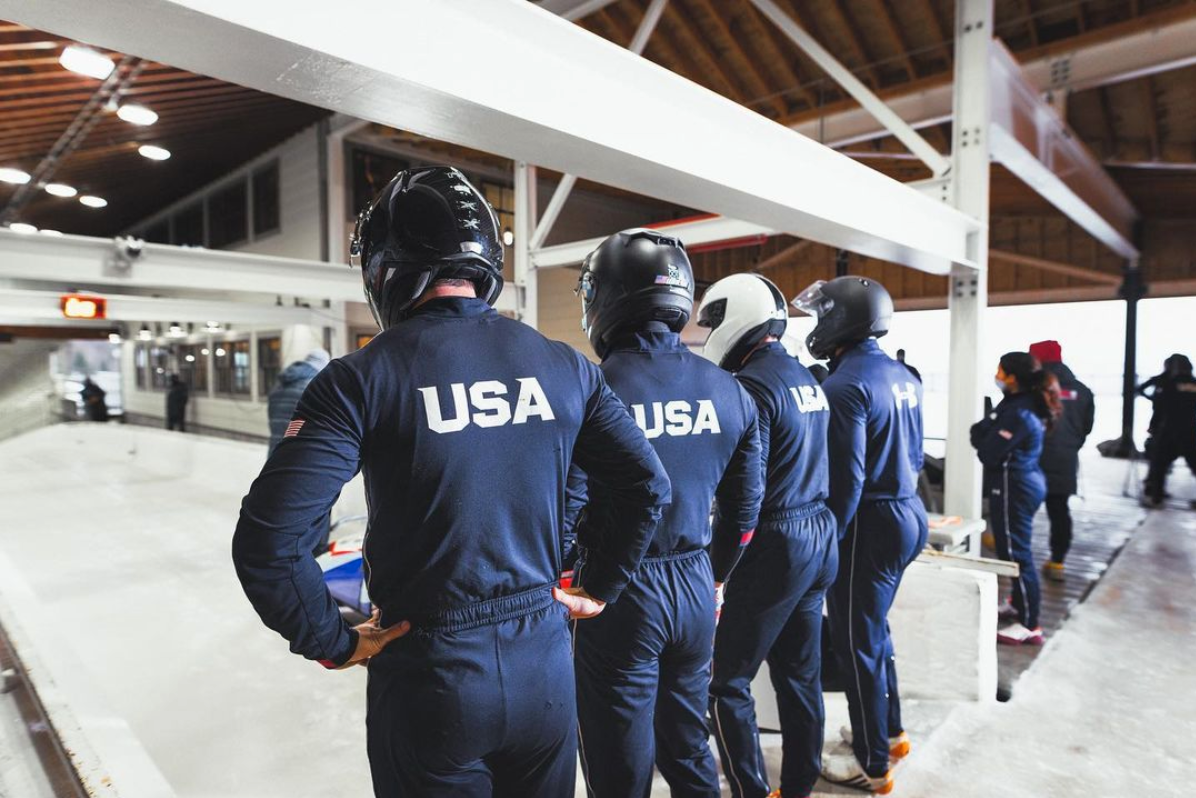 Barreling down an ice-covered run and dropping several hundred feet in less than a minute while navigating sharp, banking turns is no easy feat, especially with four people crammed into a bobsled about the size of a kitchen table.

“For the most part, you just jump in and put your feet around each other, so you’re sitting nut to butt and holding on to the sled,” McConnell, who sits second and pushes from the left side, explained. “That’s how you’re staying in and not flying out.”

Lynch, the team’s brakeman, added, “We lock each other in. Everyone’s kind of pushing into each other, so you’re not sliding back and forth. I actually lock my ass into the back of the sled and then use that to drive my head into the three guy. I’m pushing so hard I’m trying to bruise his back.”

McConnell chimed in, “You want to be close to the guy in front of you, but you also want to fill up as much of the sled on the inside as you can for aerodynamics. You want the wind to just come over top. You don’t want it coming in the sled and creating any kind of drag.

“We’re trying to fill out [the sled] wall to wall, trying to be as tight as possible and not let any airflow come through.”

The crew keep their positions tight in the sled for aerodynamics, but staying tight also helps keep the team safe on the course. The ride can be rough, and the G-forces can really throw the riders around inside the sled.

“If you’re not locked in, you’re going to get bounced around. We’ve had people break bones from not riding well,” Lynch recounted.

While bruises and broken bones are a risk during routine bobsled runs, crashing presents another level of danger. Crashes happen, even in practice. If the team makes a mistake, the whole crew could end up ping-ponging down the icy track at 80-plus mph.

“Very rarely will you make it through your whole career without crashing,” Del Duca, who serves as the sled’s pilot, said.

What is it like to crash on rock-solid ice at breakneck speed?

Del Duca compares crashing with “opening the minivan door and rolling out with a motorcycle helmet on.”

“It’s so loud when your head’s on the ice and you’re moving at 80 miles an hour. Just imagine going on the highway at that speed,” Lynch added.

It’s a good thing bobsledders are well equipped with safety gear, including helmets and burn vests.

After one recent crash, the team’s ice helmets were burned flat. Though the helmets were radically damaged, they did their jobs. No one was seriously injured.

“We have burn vests similar to what you wear motorcycle racing,” McConnell said. “It’s a thin piece of cloth that we wear under our speed suit, in case we do crash and happen to be going 80 or 90 miles an hour. If you’re going to be sliding against the ice, even though ice is cold, you’re going to get heat friction that can end up burning skin off. We’ve got guys on the team that have had skin grafts because that’s happened to them.”

Even though the team is protected by their safety gear, crashing at high speed can wreak havoc on the team’s mental game. Del Duca said the best thing to do after a crash is jump back in the bobsled and go again.

Read Next: Why Marine Veteran Scotty Bob Is Training the Next Generation of Base Jumpers