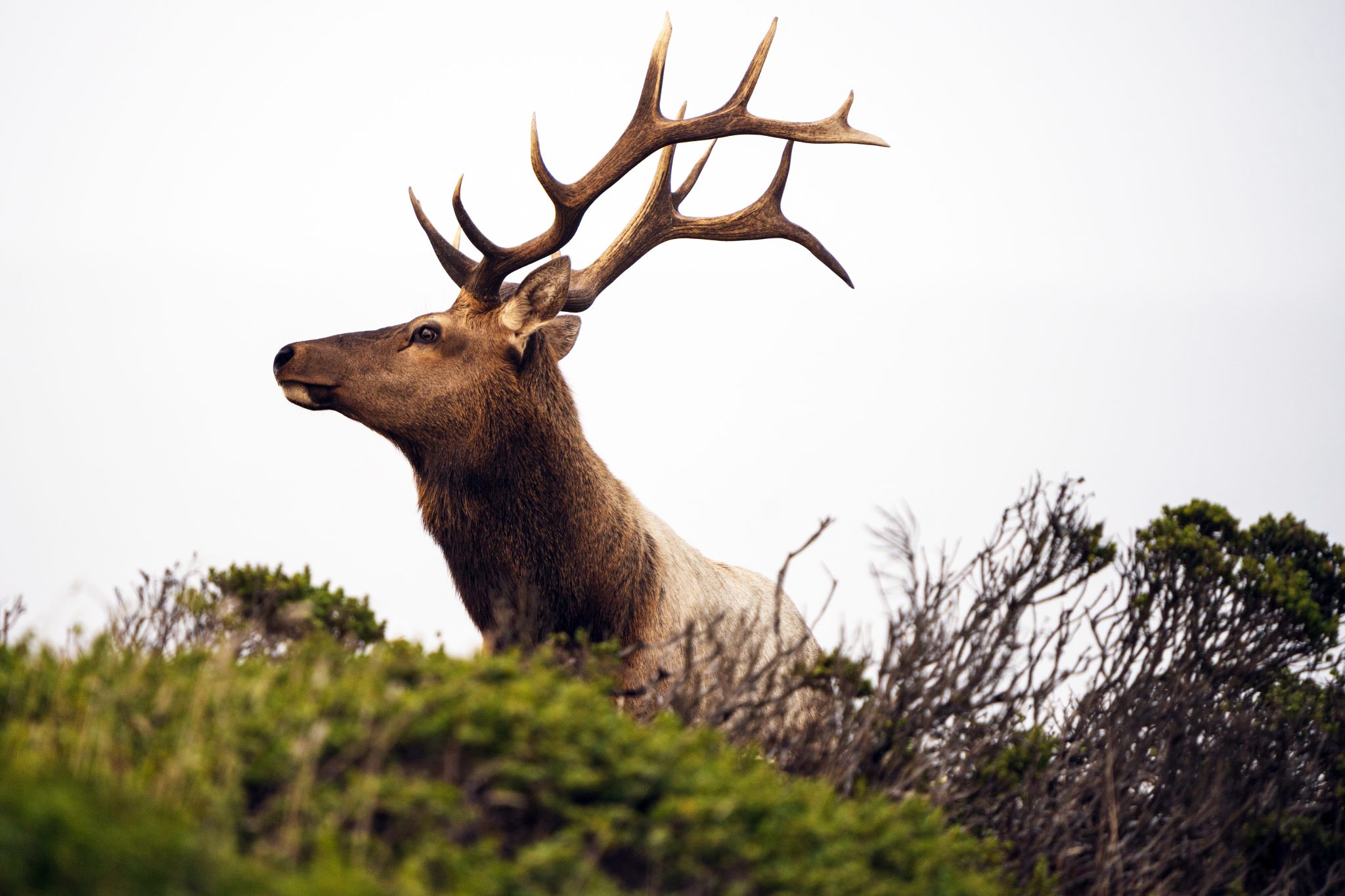 A string of nearly 100 volunteers hiked 350 gallons of water more than three miles on Saturday, Aug. 28, in an attempt to save a suffering herd of tule elk. The water was brought to a dying pond within California’s Point Reyes National Seashore, an important source of drinking water for the herd.

It will be enough to last the elk about a week, hopefully staving off dehydration and buying the drought-beleaguered animals a few more days.

A lack of rain and some of the hottest temperatures on record have been pummeling the state since last summer, causing the prolonged drought, which has had a huge impact on local agriculture and wildlife. The Tomales Point tule elk herd at Point Reyes has been acutely affected. Its strife has brought attention to a contentious confinement fence in the park that some believe is working against the animals’ struggle to survive.

“We’re in another drought, more elk are going to die right now even in this beautiful foggy environment,” said Jack Gescheidt at a protest he organized in support of the tule elk herd in July. “There’s not enough water and there’s not enough food inside the elk prison. They call this a reserve, but it’s killing the animals it’s supposed to be protecting.”

The National Park Service claims the Point Reyes elk are a “free-ranging population.” However, the original herd, located on the Park’s Tomales Point Elk Reserve, is hindered by a stretch of fencing 3 miles long and 8 feet tall.

The fence is there to keep the herd from wandering onto nearby cattle ranches and confines the elk to a 2,600-acre parcel of land, a parcel with rapidly diminishing resources.

Some scientists and park visitors consider the confining fence an impairment to the health and well-being of the elk that call Tomales Point home, and with good reason, it seems.

A third of the Tomales Point herd died last year: a total of 152 animals. The park service has said the die-off resulted from poor forage due to drought. It is worth noting that several thousand head of cattle graze within the park, just on the other side of the fence. Additionally, the park service has claimed there is no evidence the Tomales Point elk deaths were caused by dehydration or lack of water.

Back From the Brink

The tule elk get their name from the tule sedge grass that makes up most of their diet. They are the smallest subspecies of North American elk and only live in California. Tule elk were once the dominant ungulates of the region; there were about 500,000 of them before Spanish explorers arrived in the area. European settlers later hunted elk extensively, and herds were also forced to compete with cattle for grazing land.

By 1873, tule elk were thought to be extinct. However, California cattle baron Henry Miller saved the subspecies after discovering a handful of tule elk on his ranch in 1874. With protection and careful management, the tule elk survived.

In 1978, two bulls and eight cows were reintroduced to Tomales Point in the Point Reyes National Seashore park from Merced County, California, which is the only place they can be found today.

No Food, No Water, and a Lawsuit

Despite its claims that there isn’t a lack of water on the herd’s parcel of land, the park service has been providing supplementary water to the area since June in the form of three gravity-fed, 250-gallon water troughs.

Recently the park service acknowledged that “Marin County declared a drought emergency in mid-May with the lowest rainfall during the last 16 months in more than 140 years” and conceded the elk’s natural water sources could dry up if drought conditions persist or worsen.

The tule elk herd and its fence are also the focus of a lawsuit brought against the park service on June 22 by the Animal Legal Defense Fund and three park visitors. The suit is seeking a court order that would require the park service to develop and implement an updated management plan for the Tomales Point tule elk herd.

The suit says the park’s current Tule Elk Management Plan, which includes a requirement for maintaining the elk fence, was established in 1998 and has not been revised since, despite the new issues raised by the extensive drought.

The fate of the Tomales Point tule elk remains uncertain, but their plight has raised questions concerning how much responsibility the park service has for the health and safety of animals within its parks.

On the one hand, drought is a natural occurrence that majorly impacts all wildlife in a given area, whether they call a national park home or not. But in this case, the fence in Tomales Point is a manmade obstacle that seems to be exacerbating the effects of the drought on the herd by limiting its access to natural resources.

Several scientists, including University of California, Berkeley wildlife management experts Reginald Barrett and Dale McCullough, and US Geological Survey wildlife scientist Judd Howell, have openly expressed concern for the fenced elk in a formal letter urging the park to update its management plan.

“You have animals artificially confined behind a fence,” said David Graber, one of the signatories of the letter and the park service’s former chief scientist for the Pacific West region. “That’s not natural regulation.”

Critics of the fence say it essentially makes the elk prisoners of the park service. In July, protestors marched through portions of the park donning fake antlers and dressed in orange prison jumpsuits, according to ABC7 News. They carried signs mimicking the official national park signs that read: “Tule Elk Penitentiary.”

Those who want the fence removed say the herd would then be allowed to scatter to find better water sources and grazing areas, making it easier for them to survive drought conditions. It’s also hoped the herd would contact other nearby herds of tule elk near Limantour and Drakes Beaches.

The park service has argued that exposing the Tomales Point herd to new animals could introduce them to chronic wasting disease, a fatal neurologic disease affecting elk and deer throughout much of the country. The disease has not been found in any of California’s elk populations.

Read Next: Elk Hunting on Public Land: How To Build a 3-Year Strategy for a New Area