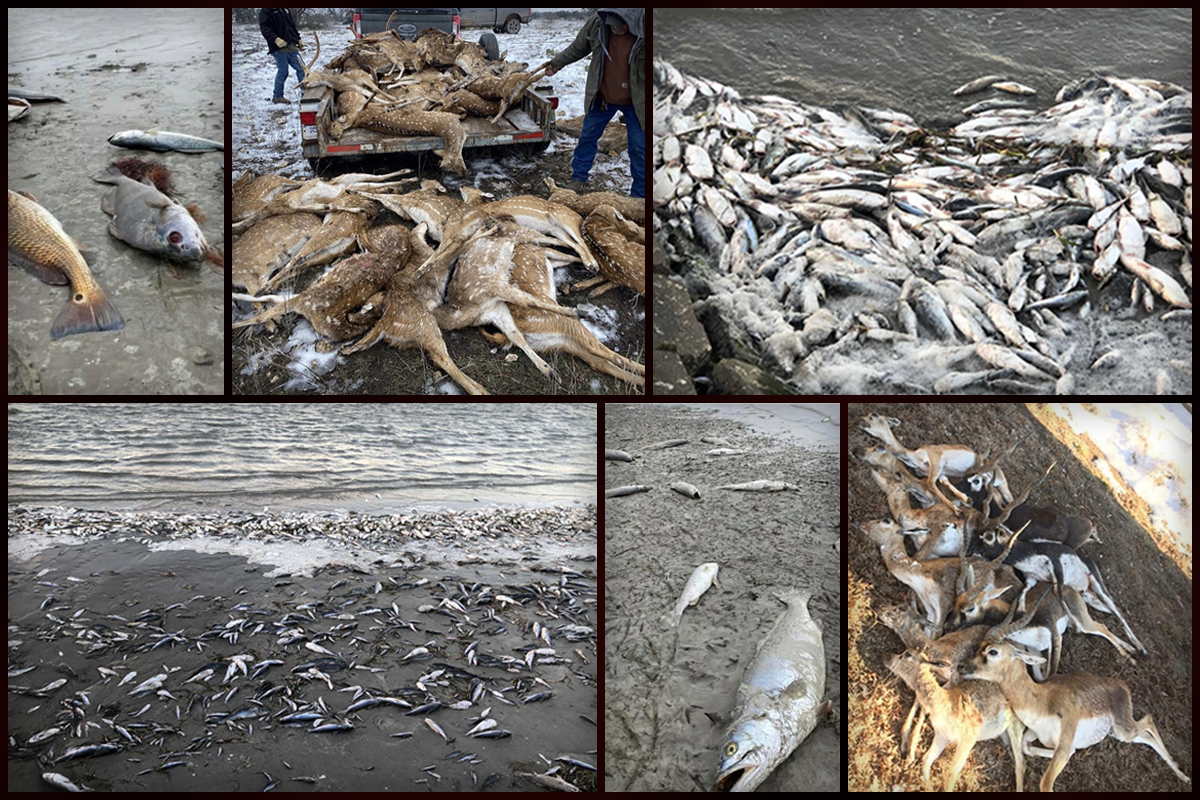 Winter storm Uri has dealt a devastating blow to coastal fisheries and exotic game species in Texas, and with only preliminary reports and anecdotal data currently available, officials say it will take months to fully understand the scale of this unprecedented fish and wildlife kill.

Uri blanketed Texas with ice, snow, and subzero temperatures not seen in the Lone Star State in a generation. More than 3.5 million Texans lost power, with many stranded in freezing homes without heat as temperatures plummeted below freezing. About half the state’s population was without potable water last week, and dozens of people have died as a result of the storm, with the full toll yet to be determined.

Images of ranchers filling trailers and truck beds with dead axis deer and blackbuck antelope surfaced online and on social media. These images, preliminary numbers from ranches, and some habitat impacts reported by Texas Parks and Wildlife, only hint at the full extent of the loss. “Just based on what we’re aware of, I think this thing is going to be in excess of $2 million just from the animals, and I may be very conservative on this, but another half-million dollars on infrastructure,” said Charlie Seale, executive director of the Exotic Wildlife Association and an exotic game ranch owner himself.

From the first night of the storm, Seale knew his animals were in trouble. “About two in the morning, when I got up to check the weather station, we had 30-mile-an-hour north winds, snow and ice, and a chill factor of minus 15. That first morning I pulled a dozen [dead axis and blackbucks] out of my barn,” he told Free Range American. “I had about 200 animals. Today I have about 45 left.”

“We have animals that are still dying as we speak. And they’ll continue to die for about a week or two from residual pneumonia and stress,” he said. “They’re not out of the woods yet. Even with the beautiful weather that we’re having now.”

Blackbucks are a hearty and prolific introduced exotic species popular with ranchers and hunters, and Seale expects them to rebound in three or four years. Axis, on the other hand, have a unique breeding and birthing cycle, and the timing of this storm couldn’t have been worse for them, biologically speaking, he said.

“Axis have a six-month gestation period. The bulk of the deer that I lost were my does. I think they were more susceptible because they were all pregnant. They’re fawning right now. So not only did we lose our current herd, we lost a whole future age class.”

Cable Smith, host of the Lone Star Outdoor Show podcast, received regular updates from ranchers. “Stuff from India performed the most poorly. They just can’t deal with that cold. Blackbuck was the one that I saw just all over,” Smith told Free Range American. “Man, there are just some ranchers who lost hundreds of them. Axis are a little heartier, but not much. One of them told me he lost 60 on just one ranch.”

John Hughes, a charter captain who runs a fleet of sport fishing boats out of Port Aransas, has seen firsthand the storm’s effect on the coastal fishery — primarily speckled trout. The pictures and video he shared show white bellies floating in the bay as far as the eye can see. “We just ran about 35 miles from Corpus Christi to Baffin. Tons of dead trout. It’s worse than we thought,” he told Free Range American.

“Our bay is about 2 million acres, and the average depth is probably a couple of feet,” he said. “But we have all these canals and channels and those fish, instinctively, will go pile up in that deeper water. Ideally, you need about 12 to 16 foot of water to truly be protected, and a lot of our channels are anywhere from 6 to 10 foot.”

Hughes said that the cold was only part of the issue.

“Those fish that were fortunate enough to get into the deeper channels did just fine, except for those that ran into channels where barges continued to run. The majority of that fish kill in Aransas Pass, Port Aransas, was due to barges,” Hughes said. “You can imagine those fish holed up down there on the bottom [of the channels], and then these 4-foot-around, 6-foot-around props come through there and spin everything up and dirty the water. The fish just couldn’t take it.”

Hughes does see a potential bright side. “The majority of the fish that were killed were resident fish. So, the channels will start loading up with migratory trout and drum from the ocean coming into the bays here as the water warms up in the next few weeks.”

Texas Parks & Wildlife has also reported that while the severe cold did impact recreationally important species like spotted sea trout, red drum, sheepshead, and tarpon, the majority of fish killed (by number) were non-recreational species, primarily forage fish or baitfish that game species typically feed on.

“Guides are really going to have to get adamant on teaching clients what happened and how we’re going to fix it,” Hughes said. “We can’t kill all the fish that we catch. Let this ecosystem do what it does, and it’ll come back. It’s okay to not have a full cooler this year, so that you can have a full cooler for years to come.”

Jako Lucas, a redfish and tarpon guide out of Port O’Connor, knows things could’ve been much worse. “We’ve had the lowest of low water in the last three, four months,” he told Free Range American. “Because we had such low water, a lot of fish couldn’t be trapped as far back in the ponds as they usually would be. Luckily, it was so low that a lot of the water was off the flats, so the fish were closer to deep water when the storm rolled in than they would’ve been.”

Lucas believes in a fast recovery as well. “I think it’ll bounce back quite quick. I’d love to see Texas Parks & Wildlife still hammering [on recovery measures], especially because it’s getting into spawning season for trout. So, to maybe cut back on how many fish guys keep will help balance out the scales.”

Read Next: Take Down Those Dams: New Legislation Could Save Snake River Salmon