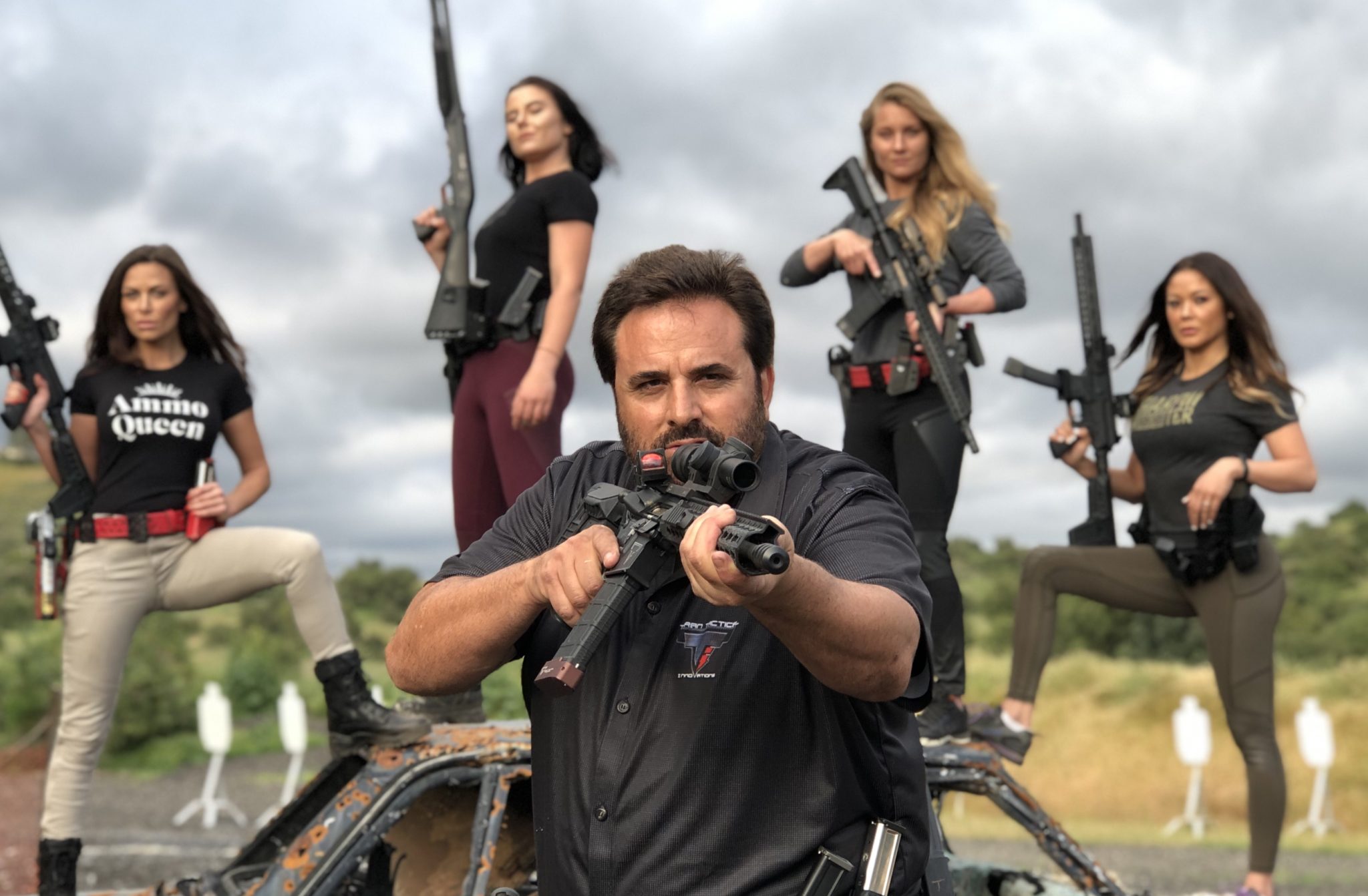 Taran Butler is a better shot than you. Sure, there are people who may be better at very specialized skills within shooting, or who shoot better with a particular style of firearm under certain conditions or at a specific range of distances. But Butler, who runs Taran Tactical Innovations and trains both Hollywood stars and military/law enforcement clients at his facility in Southern California, is often regarded as the best all-around shooter alive.

If his name eludes you, here’s what you’re missing. Butler is a multiple United States Practical Shooting Association (USPSA) 3-Gun National and World Champion; he’s the man who helped turned Keanu Reeves into John Wick; and he can shoot six, 8-inch plates set 30 feet away with one hand while drawing from the hip in well under two seconds. If you’re not impressed, you should be.

Butler said that he was a natural shooter from the start, but his competitive career officially began in 1995. He attended his first match with a Glock 21 pistol — which had a lower capacity than the pistols of the other competitors and required an additional reload. Butler still finished 7th in a field of 118, and that’s when he realized that he had a future in competitive shooting.

The next year he won the Southwest Pistol League’s Limited Division, and from there he went on to win the SPL’s Unlimited Division and a handful of Glock Shooting Sports Foundation matches. After that initial 7th place finish, Butler won every match he entered for the next two years, which were all pistol-shooting competitions. It wasn’t until the following year that he would jump into the world of 3-Gun, an arena he considered “kinda lame” before trying it out.

In 1997, Butler competed in his first 3-Gun match, the Five Dogs Winter Classic, despite the fact that he didn’t yet have his Benelli shotgun tricked out for 3-Gun — and none of the ways he was taught to load a shotgun were practical for competition. He borrowed two shotguns for the weekend and described those stages as an “absolute disaster because the shotguns didn’t function properly … [it] was a box-office fiasco on every level.”

Butler, who had gotten used to winning, was livid, but he pressed on. He noticed that most of the competitors were going into the prone position to shoot the farthest rifle targets, a distance Butler estimated to be about 100 yards. Figuring that he had nothing to lose after the shotgun stages, Butler shot standing. The second place time for that stage was 25 seconds — Butler finished in 16. On the pistol stages,  since that’s Butler’s expertise, he “went dog nuts and absolutely shredded the pistol stages into the ground.” Even though he came in near the bottom for the shotgun stages, his incredible performances during the pistol and rifle stages propelled him to the top, winning the entire match overall. It was the first of many wins, but also some heartbreaking losses.

Butler’s first trip to the 3-Gun Nationals was in 1999. He was leading by a large margin (about 200 points) after 14 stages, but there were still two to go. The 15th stage required each competitor to rest their rifle on the roof of a car while shooting. Butler’s rifle didn’t have a free-floating handguard, so the contact with the car interfered with the vibration of the barrel, causing the gun to shoot extremely high at 100 yards. The bullets were impacting the torso target at the top of the head when Butlet was aiming for the A zone. He suffered eight penalty misses, ultimately losing the match by five points — which he equates to about half a second. At his next 3-Gun Nationals appearance, the cross pin holding the trigger group in his shotgun broke during the final stage, and the entire trigger group fell out of his gun. He ended up losing by a few points. These losses taught Butler the importance of having high-quality gear and knowing the gear that you have.

In 2003, Butler finally broke through. At the time, Bennie Cooley was the reigning 3-Gun champion. He was unstoppable with a long-range rifle, and Butler was unstoppable with a pistol, so the shotgun stage was where they met in the middle. First up was the pistol stages, and Cooley shot first. He was slower but had no penalties. Butler shot three or four seconds faster but suffered penalties — the pressure had gotten to him, and he was upset with himself. Great, throwing away the Nationals again, he thought. On the next stage, Butler again beat Cooley on time — but, also again, he shot a hostage. At that point, Butler had to shake off the pressure and focus solely on the shooting. The next pistol stages were left-hand, right-hand, and Butler shot them clean. He went on to shoot the long-range rifle and close-range hunting rifle stages, and then shotgun.

Butler dominated the stages and ultimately won the 2003 3-Gun Nationals in the Limited Division. That was the beginning of a long winning streak and a record-breaking career. The following year, Butler became the first shooter to win the 3-Gun Nationals’ Tactical Division. In 2012, he won the Open Division, making him the USPSA’s first-ever Multigun Triple Crown Champion, having won Nationals in each of the three divisions.

“It’s kind of like winning a championship belt in three different weight classes in the UFC,” Butler said of his accomplishment.

Another defining moment in his career was in 2007 at the Fort Benning Multigun Challenge. Butler was unaware of a rule change in his division that limited shotgun magazine tubes to eight rounds. His shotgun held nine, so he was automatically moved into the unlimited division where he was shooting against competitors with 16-round mag tubes on their shotguns — and in one case, a 32-round drum mag. They also had 30-round pistols, and their firearms were tricked out with the best upgrades available. Butler said it “is the equivalent to showing up in a bicycle at a motocross competition.”

Against all odds, Butler won. Legendary shooter Jerry Miculek, who Butler described as “a man of few words and one of the greatest shooters that ever walked the earth,” was also competing that day. After the match, he approached Butler and said, “Taran, you’re a fuckin’ animal” — and then walked away. Butler said it’s one of the best compliments he’s ever received from a peer. After the Fort Benning match was televised, Butler’s sponsorship opportunities quadrupled. Despite this massive success, Butler had his sights set on accomplishments outside of the competitive shooting world.

The next step for Butler was appearing as the go-to firearms expert on the hit TV series “TopShot” for five seasons. From there, things took off for his career as a firearms trainer. He was hired to work with Hollywood stars such as Keanu Reeves and Khloe Kardashian. When one of Butler’s videos with Keanu Reeves went viral, his popularity in Hollywood exploded.

If you enjoy watching current films with actors who actually look like they’ve held a gun before — and don’t utilize a 1970s-style teacup-and-saucer grip — you can thank Butler for helping to establish a higher standard for gunplay in movies and television. He has consulted on numerous films and has trained A-list Hollywood celebrities, including training Michael B. Jordan for his role as Killmonger in “Black Panther” and Halle Berry for her role alongside Keanu Reeves in the most recent “John Wick” movie. He also trained director Ang Lee and star Will Smith for “Gemini Man.” The film features a young Will Smith shooting a Glock 41 modified by Butler’s company, Taran Tactical Innovations (TTI), against an older Will Smith shooting a Gucci’d-out TTI Combat Master Glock.

Butler also mentioned several projects that have yet been released, including his work with “How I Met Your Mother” star Cobie Smulders for her new ABC show “Stumptown,” an adaptation of a popular graphic novel. He has also trained John Cho for Netflix’s “Cowboy Bebop”; Josh Lucas for the upcoming “Purge” film; Charlize Theron and KiKi Layne for “The Old Guard”; and Robert Pattinson, John David Washington, and Aaron Taylor Johnson for an unnamed upcoming film.

Butler also trains military and law enforcement groups whose jobs and lives rely on the skilled handling of weapons. “Three-Gunners are the deadliest weapons handlers on the planet,” Butler said, pointing to the fact that grueling matches that last three to four days are frequently won and lost by fractions of a second. So world-champion 3-Gun shooters like Butler spend countless hours “training their asses off.” He acknowledged that military and law enforcement groups are more proficient with combat tactics, but they frequently come to people like Butler for firearms operation and manipulation training.

While training military and LEO groups, Butler said he noticed that those who also compete in 3-Gun “annihilate” their non-competition-shooting counterparts. He encourages everyone he trains to also compete in multi-gun or USPSA competitions to hone their skills. While he sometimes works with celebrities for months, Butler usually has only a day or two with tactical groups, so training them is more about tweaking small habits and incorporating 3-Gun fundamentals into their tactics.

In his impressive career, Taran Butler has learned from some of the highest highs and lowest lows in the shooting sports. Few, if any, will ever be able to match his accomplishments in that realm. But he used it as a springboard into an adjacent career that helps shine a light on others as well. Butler’s work with military and law enforcement demonstrates the value of his 3-Gun training and has the potential to save lives. His work with Hollywood stars has raised the standard across the board, even in media he doesn’t touch, when it comes to the realism we see on screen. So, yeah, he may be a better shot than you — but he earned it.

This article was originally published Dec. 3, 2019, on Coffee or Die.