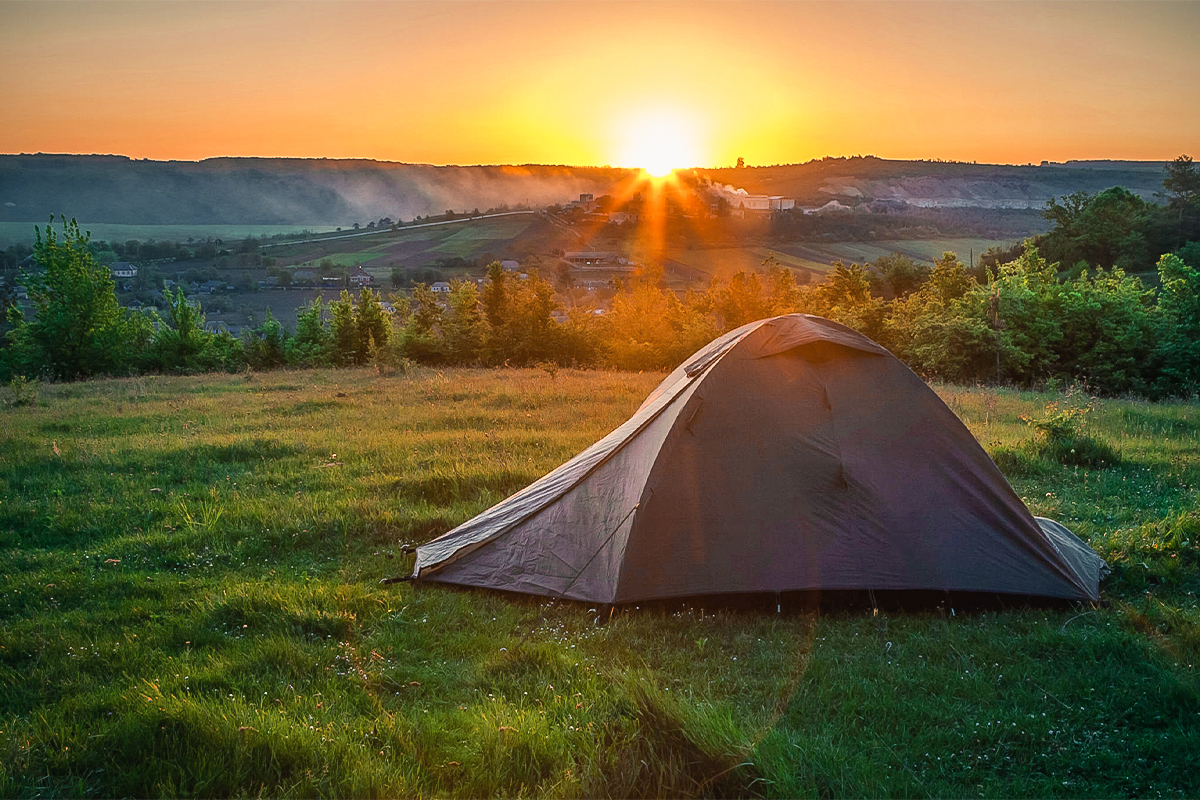 Whether you’re in the woods, on the trail, or camping in your backyard, summer insects are a fact of the outdoor life. They can range from mildly annoying to seriously dangerous, but with proper care, it’s relatively easy to reduce the risk. While a lot of people may not give bugs much thought beyond swatting, that view is far too simple.

The bug threat varies depending on location. Thankfully, we don’t have to contend with the fearsome tsetse fly in America, but plenty of other insects can make us sick. So, how can we stop insects from inundating us at a campsite, bothering us on the trail, or passing along an infectious disease?

We’ve beaten malaria in the U.S., but West Nile virus, Rocky Mountain spotted fever, and Lyme disease all remain active and are even spreading as the climate warms. The Centers for Disease Control and Prevention claims that mosquito- and tick-borne illnesses in the U.S. have tripled in this century. But from bug spray to bug nets, we can protect ourselves from insects that carry disease. And the same methods ward off bugs that merely bother us, so it’s a win-win.

Insects thrive in warm environments, so it’s no surprise that the American Southeast offers some of the worst bugs in the nation — and there’s a lot of them, too. From the swamps of Louisiana and Florida to the uplands of the Piedmont, mosquitoes and ticks are king.

The mosquitoes of the Southeast can carry West Nile virus and even dengue. The latter is rare in the U.S., and West Nile isn’t particularly common either, with about 2,500 U.S. cases reported to the CDC in 2018. And despite widespread panic a couple of years ago, the Zika virus is a very low risk in the mainland U.S., though it is still active in some territories.

Ticks, meanwhile, can carry Rocky Mountain spotted fever, a painful disease with a slew of symptoms, most notably a spotted rash. Lone Star ticks, found mostly in the Southeast, can also cause a red meat allergy, though it’s incredibly rare. And then there are venomous (though somewhat overhyped) spiders: the black widow and the brown recluse.

Red imported fire ants (RIFA) are another bane of the South. This non-native pest is difficult to control and seemingly everywhere, so before you set up camp or take a seat in the woods, check for mounds — which can be several inches high on the surface and home to 100,000 to 300,000 ants. They don’t spread disease, but their sting is painful and can cause an allergic reaction.

Moving north, New England has many of the same insects as the Southeast but with slight differences. Despite the cooler weather, mosquitoes and ticks still thrive north of the Potomac. They’re mostly just a nuisance but disease is still a concern.

Mosquitoes in the Northeast can carry West Nile virus, though you won’t find dengue. And while black widows can be found in the cooler temps, brown recluse spiders tend to stick to the South.

The biggest insect problem in the Northeast is ticks — specifically those that carry Lyme disease. This bacteria, characterized by a bullseye rash, can cause a wide variety of symptoms from fever to debilitating joint pain if left untreated. While Lyme is found in other regions, New England has it bad.

Though not disease carrying, black flies bite aggressively and cause a fair amount of pain. These little guys can come in zombie-like swarms and, unlike mosquitos, mostly congregate around colder, running water. 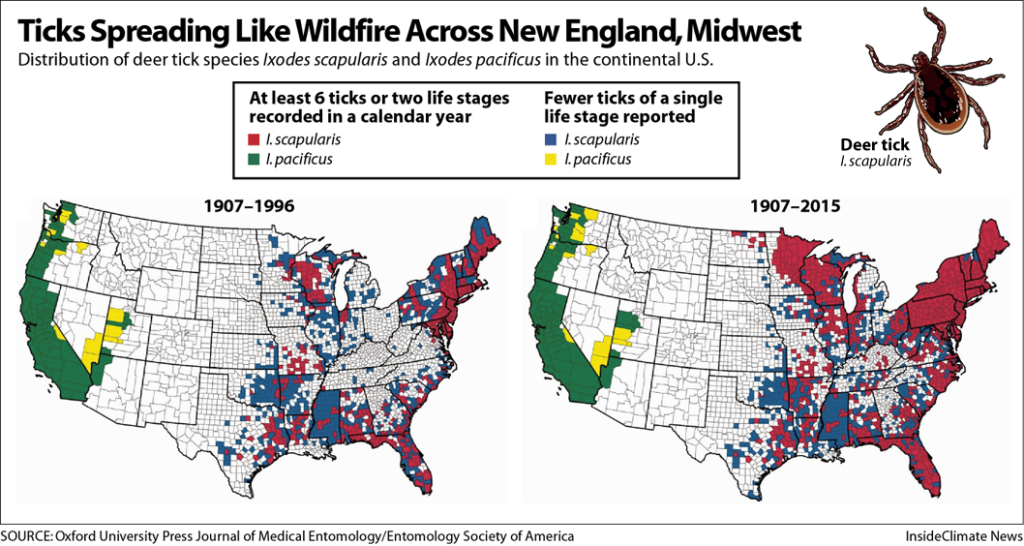 Despite their frigid winters, the Midwest has plenty of insects to spare.

Once a haven for malaria-bearing mosquitoes, as Lewis and Clark discovered in the early 1800s, those days are thankfully behind us. But the American Midwest continues to have issues with West Nile virus and Rocky Mountain spotted fever.

Also, ticks in this area can carry Lyme disease, though it’s less common than in New England, and you’ll find brown recluse and black widow spiders. And let’s not forget about black flies — plenty of them in the Heartland, too.

Mosquitoes. Lots of mosquitoes. These ubiquitous insects rule the Rocky Mountains, especially near lakes and in calmer areas where the wind cannot prevent them from breeding. West Nile virus still occurs in the Rockies, but, as in other parts of the U.S., it’s quite uncommon.

And while there are ticks, I’ve personally never seen one in the mountains. So while Rocky Mountain spotted fever got its name here, it’s not very common in the Rocky Mountains after all.

In the end, mosquitoes and ticks in the Rockies are mostly just a nuisance.

And, finally, what about the insects of the American West?

As expected, mosquitoes on the West Coast can carry West Nile virus, and Southern California does have a higher West Nile incidence than other parts of the country. Parts of Southern California also suffer from St. Louis encephalitis, another mosquito-transmitted disease, though it’s rare.

However, in most of the common hiking areas — such as the Sierras or Cascades — the insects of the American West are mostly just a nuisance.

The exception to that rule is scorpions. The deserts of California and Arizona have a wide variety of these stinging arthropods, and while their stings can be painful, they generally don’t cause serious injury.

Insects of the Pacific Northwest, while annoying, tend to be not very dangerous.

We’ve gone over the various insects of the U.S. region by region and all the nasty things they can do to you. However, one of this means that you can’t enjoy the great outdoors — just be smart about it. Hiking around insects isn’t dangerous, even in swampy areas. You also don’t need to wear a full protective suit whenever you step outside. A few simple precautions can make bugs almost a nonissue.

First, wear bug spray. The CDC recommends that hikers wear repellant approved by the Environmental Protection Agency, like DEET or picaridin, though there are other options as well. These chemicals, while nasty in their own right, keep bugs away from you. Just be aware that DEET is a plasticizer, so it will melt Gore-Tex. Apply it carefully, though, and it works great.

Another option is the centuries-old trick of bug netting. Simple but effective, bug nets are hung over an area to keep insects at bay. If you’re out camping in a buggy area, I highly recommend sleeping in a tent or hammock with a bug net over it. You can even buy a bug net to place over your hat.

These are standard precautions for protecting yourself from bothersome and potentially disease-carrying insects. They work on everything from the black flies of New York to the malaria-bearing mosquitoes of the tropics.

However, if you suspect that you may have contracted an insect-borne illness, see a doctor immediately. Lyme disease, dengue, and malaria are treatable, but time is of the essence. Being tough is not going to cure West Nile virus.

That said, if you wear bug spray, cover exposed skin, and sleep inside of a bug net, the odds are in your favor. Insects are not the threat that they once were, but they still warrant knowledge and preparation. Take precautions, use common sense, and don’t let insects ruin your time outdoors.

This article was originally published May 22, 2019, on Coffee or Die. 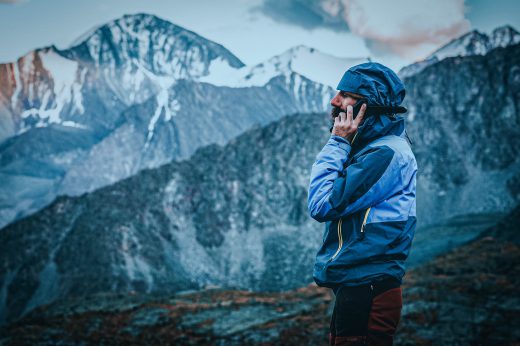 Survival Tactics: Life and Death Lessons From Our National Parks