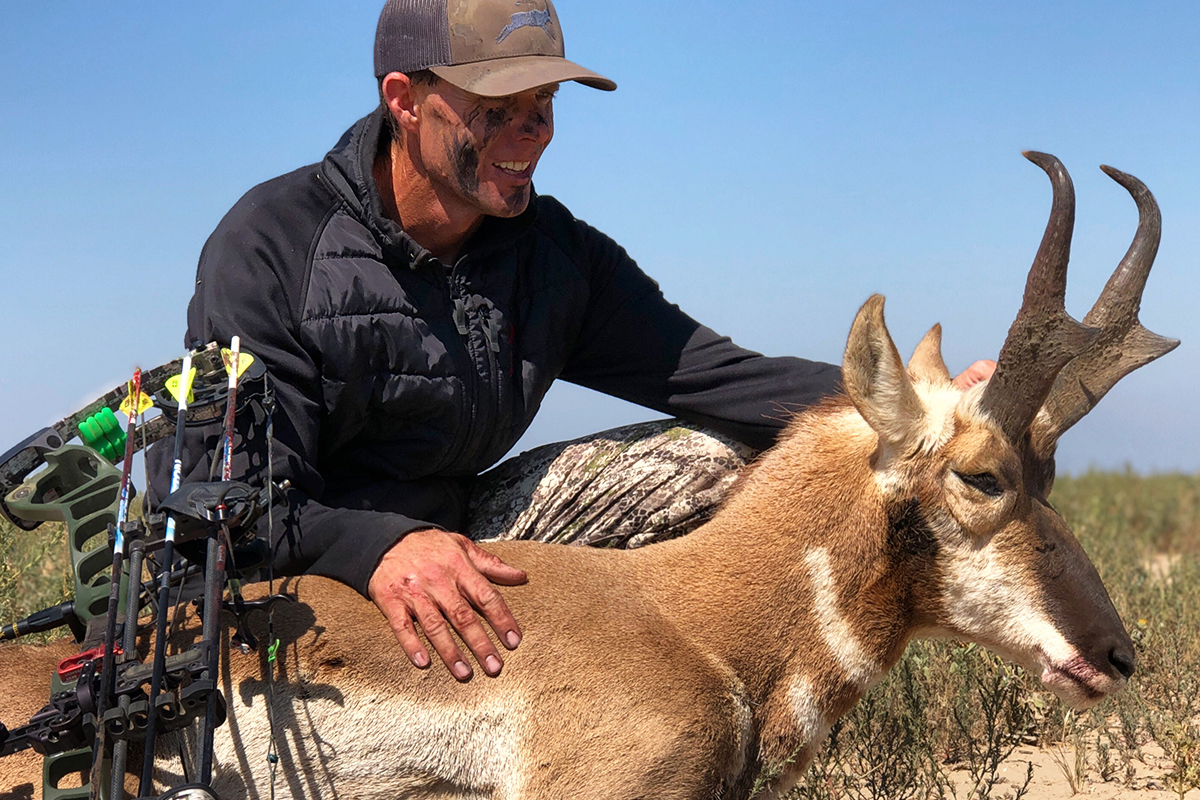 No animal embodies the spirit of the American West like the pronghorn. Though tawny in build, these fleet-footed plains dwellers are hearty critters, and thanks to sound management practices across the Western US, populations are thriving.

Their 10-power vision blended with cheetah-like speed makes the prince of the plains a bucket-list critter, and those who pursue them with rifle or bow can count on a battle with a worthy opponent. Add their keen senses, white rump, orangish main coat, and ebony crown, and you have a creature unlike any other on earth. From barren prairies to sage-dappled plains to rolling, mountainous country, hunting for pronghorn is a top-end Western adventure.

A pronghorn’s slender neck and mane are very giraffe-like. While the animals, affectionately nicknamed “speed goats,” are commonly referred to as an antelope or “American antelope,” the pronghorn is not actually related to antelopes at all. The giraffe is its closest biological relative.

Pronghorn are very visible due to the open country they call home, and hunts are typically action-packed, but the terrain they inhabit doesn’t require hunters to be in marathon-like shape. I’ve been chasing pronghorn across the West for more than two decades. Here are some top states to consider when making plans:

The Cowboy State is home to the world’s largest population of speed goats, and while numbers rise and fall from year to year, primarily due to drought and predation, you can’t go wrong in Wyoming. Multiple Pope & Young and Boone & Crockett entries come from the state each year, and like most Western states, public land abounds. From national forests to Bureau of Land Management (BLM) areas to Walk-In-Access (WIA) areas, you’ll have plenty of room to stretch your legs.

Wyoming, for nonresident rifle and archery tags, is a draw state. Do your homework. Many units in the state’s Western half are chock-full of pronghorn, and access isn’t an issue. However, these tags may require a few applications before your name gets called. Stay the course and keep applying. Wyoming is worth the wait.

The famed Red Desert units are a top choice for many hunters. Area 63, which is 80% public land, is another eyebrow-raiser. Those wanting to forgo the wait should look to units in the Eastern and central parts of the state. Pronghorn populations are solid there, but most land is private. Don’t let that stop you, though. Wyoming has done a fantastic job of partnering with landowners to open private dirt to public access. Make some phone calls, study your digital mapping system, and drop some destination pins.

While Colorado doesn’t have the numbers Wyoming has, the Centennial State is a great option pronghorn-hunting destination. Nonresident bowhunters can purchase over-the-counter tags and access more than half of the state’s huntable units.

Rifle tags for residents and nonresidents are obtained through a draw process, and applications are due in early April each year. If you apply and pull a goose egg, Colorado has a secondary draw and a leftover list. The leftover list is an excellent asset for nonresident hunters, and if you check it often, new tags pop up from time to time. Why? If a hunter turns in a limited tag, that tag is added to the leftover list.

Hunters should know that the pronghorn population in the Southeast isn’t what it was in the late 1990s and early 2000s due to drought and a few brutal winters. Top limited-draw units like Unit 2 and Unit 201 in the Northwest are bangers, and while both promise solid numbers and trophy potential, they require multiple points.

Like Colorado, South Dakota is a top location for hunters who don’t want to wait to pull a tag. Archery tags are OTC, and those looking to go on a bowhunting mission will find no shortage of goats in the state’s Western region.

The Buffalo Gap National Grasslands in the Southwest provide excellent habitat and plenty of stalkable terrain. Populations in and around Fall River County are robust, and grassland access combined with WIA areas gives hunters plenty of room.

In the Northwest, numbers are good, as is public access in Butte and Harding counties. But these areas are no secret to nonresident hunters, so be sure and do your research before making a trip. Don’t overlook small tracts of private land that allow public access. Archery season typically runs from late August through Oct. 1. Rifle hunters will need to apply for a tag, but those who pull a permit will be in for a great adventure.

This state should definitely be on your radar. Nebraska is a largely overlooked pronghorn destination. While animals aren’t spread across the state, you’ll find good numbers and great access in the Northwest.

Sioux County and Dawes County are solid destinations. If you’re kicking around the idea of a multi-state trip, if you’re in Northwest Nebraska, you’re really close to the Southwest corner of South Dakota. Just food for thought.

Hunters must apply for rifle tags, but archery tags can be obtained OTC in these areas. Tags, at $201, are very reasonably priced. Nebraska is also a great state for young bowhunters. Youth archery permits are only $8 — you can’t beat that.

Huntable land is plentiful in areas like the Ogalla National Grasslands, which stretches 94,000 acres. Other open spots like WIA and BLM areas are also common. Spend time perusing your digital mapping apps, and I also recommend visiting the Nebraska Public Access Atlas online.

You can’t talk about the best pronghorn destinations without mentioning the Land of Enchantment. If you want a chance at a gagger, this is a great state to find and harvest a true buck of a lifetime.

The world record pronghorn, a 94 4/8-inch legend, was harvested in Unit 16. If you’re fortunate enough to pull a New Mexico pronghorn tag (which can be a difficult chore, so stay patient), find the water, and you’ll find the goats. Drought conditions in the state fluctuate, so be sure and find out as much as you can about the unit you’ll be hunting. Contact state game wardens and biologists. These folks can provide tips about exact locations and update you on herd status and overall land conditions.

Unit 18 is another area to put in your memory bank. It’s one of the state’s largest units with lots of public access, and it produces multiple trophies annually. The Northeast harbors the most goats, and units in this part of the state should also be considered because of sheer numbers.

If you’re a pronghorn junkie like me, or you’ve been doing research, you might be wondering why Arizona and Nevada aren’t on this list. The biggest reason is the odds of pulling a tag are slim, especially in areas known for producing giant bucks.

When it comes to Arizona, keep putting your name in the hat. You can’t draw if you’re not applying. As for Nevada, pick a unit and start accumulating points. Both are great options if you ever draw them.

Read Next: When an Archery Pronghorn Hunt Goes Wrong