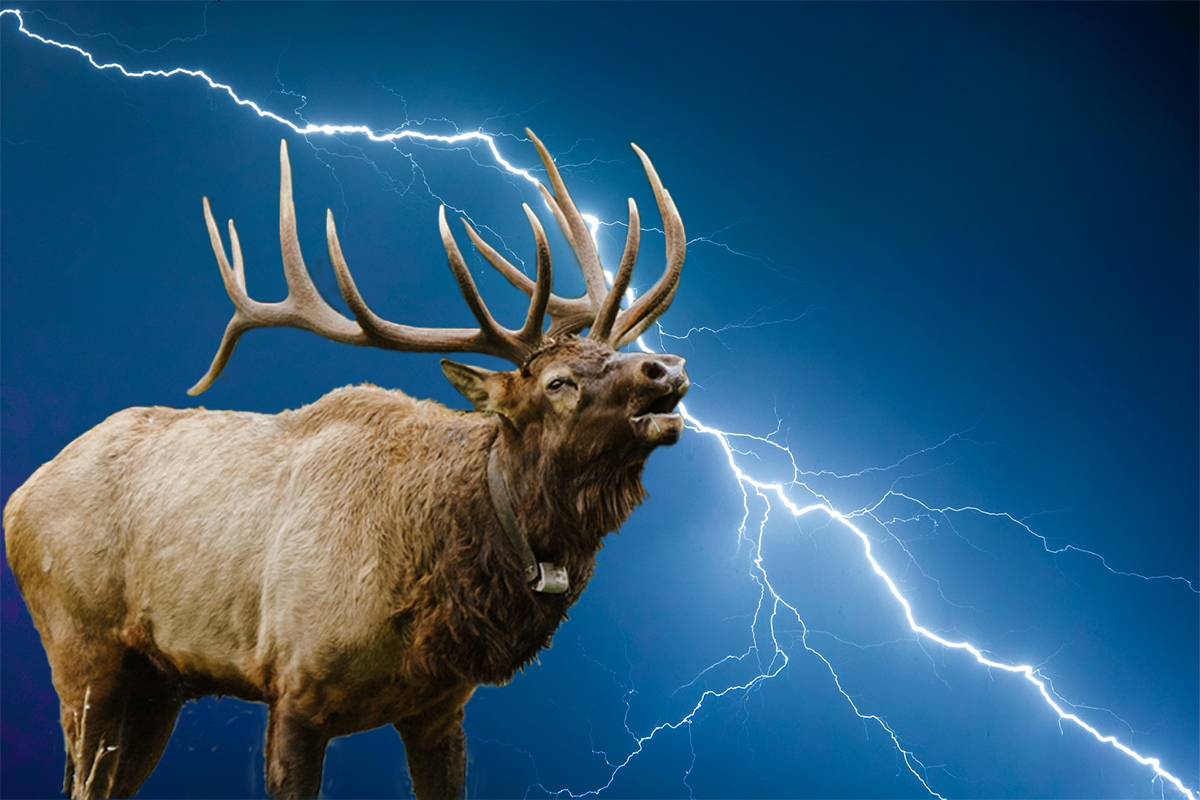 Minnesota native Brandon Dahring shot the first elk of his archery hunting career late last month in Montana. Of all the shot scenarios that played out in his head before the trip, he never imagined his 300 feet-per-second arrow finishing the job that a 982 million feet-per-second bolt of lightning couldn’t.

Dahring was hunting with family on the Charles M. Russel National Wildlife Refuge near Glasgow, Montana, and he struck out on his own to locate some elk toward the end of their week-long hunt. Earlier in the week, he missed a shot at a big 6 x 7 bull and was determined to find another opportunity. He didn’t have to wait long.

He watched the elk come inside 40 yards before he drew. It was a good bull, covered in mud and in range. Dahring felt really good about his shot, so he made the short trip back to camp to dump gear and enlist some help with quartering the bull. Everyone was still out hunting, so he went back out to find the elk solo.

“When I shot it, it crossed the river and only ran about 50 yards,” Dahring said. “I was looking for blood and couldn’t find any. I ended up walking circles because I thought I had heard it crash. I spotted it and was absolutely stoked, but as I walked up to it, the first thing I noticed [was] how awful it smelled.”

When a few others from the hunting party showed up to help, the speculation started. Wildfire? The bull’s legs and underbelly would be burned as well. A burning tree fell on him? Lightning? They packed out the skull and antlers and as much of the hindquarters as they could so that they wouldn’t be accused of wasting a game animal.

It was a good choice since they were met on the hike out by Shawn Briggs, a game warden with Montana Fish, Wildlife & Parks. Dahring shared photos and details with Briggs. The animal’s state stumped him as well.

“I’m glad that it was put down,” Briggs said. “Definitely too bad that animal was the one he chose to take, but it’s still something he’s very happy to take home.”

Once back in Minnesota, Dahring sent the photos to a local wildlife biologist who had done past research on elk and someone from the Minnesota Department of Natural Resources. They weren’t able to determine a cause but couldn’t rule out lightning, even though the chances of an animal surviving a strike are paper-thin.

After Dahring shared the photos with Briggs and the hunting party went on its way, the warden sent the pictures to the department’s wildlife veterinarian.

“She thought that it may have been a previous predator attack that created infection,” Briggs said. “The infection would spread, causing black, necrotic, or rotting skin, which would also explain the smell that he had when he walked up to it. It could easily have been a mountain lion attack up in that area. Of course, not seeing the full carcass and not being able to do some sort of a necropsy on it takes away the option of knowing for sure.”

While a mountain lion attack is most likely the cause, surviving a lightning strike would make for a way better hunting story. How many hunters can say they shot a lightning-struck elk? Just ask Sparky, the beloved Iowa bison that took a bolt to the back and lived to tell the story for five more years.

Read Next: Breaking the Curse – A Decade-Long Elk Hunt