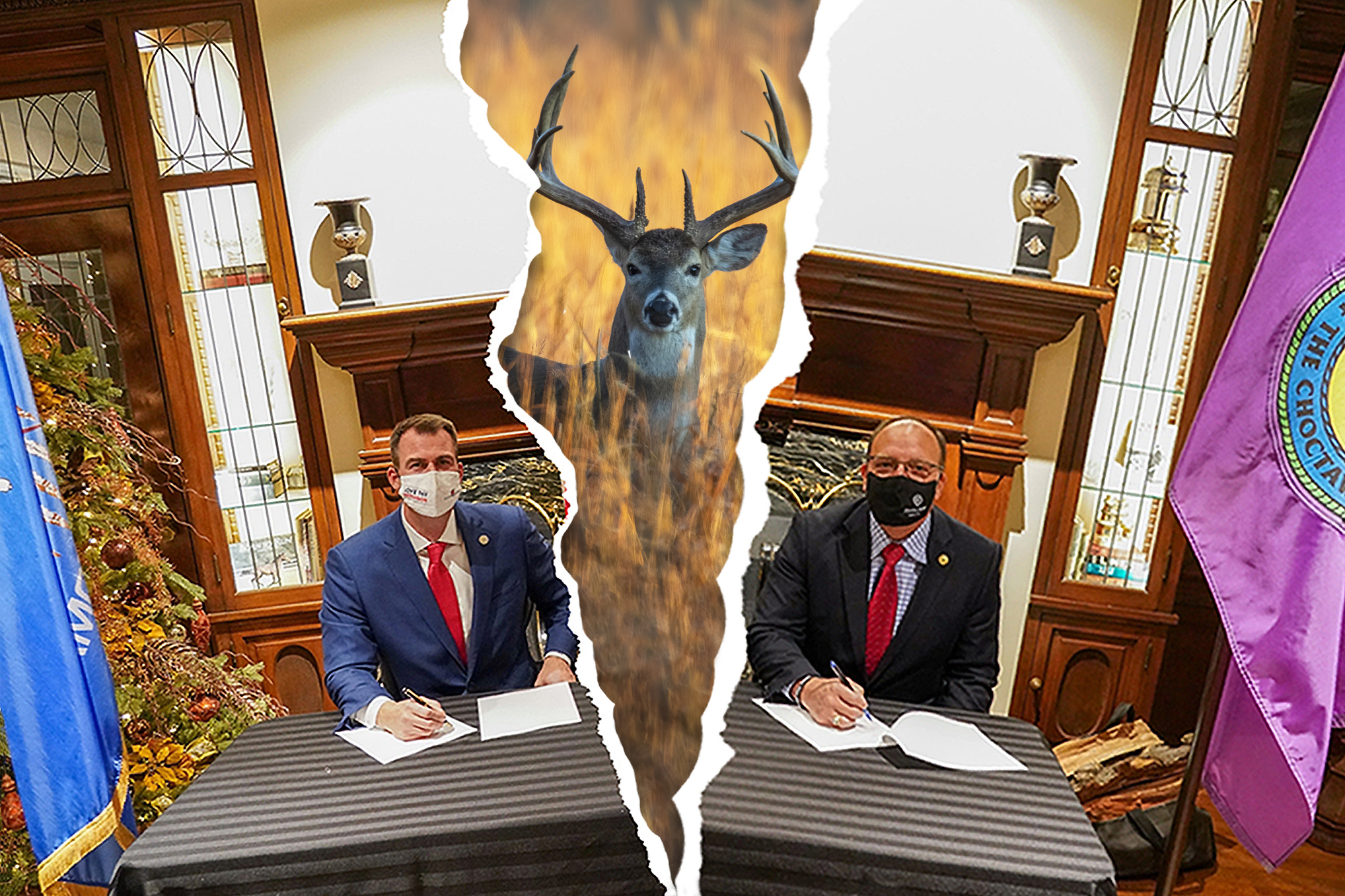 Oklahoma Gov. Kevin Stitt is under fire for canceling agreements between the state and the Cherokee and Choctaw Nations over hunting and fishing licenses because “all Oklahomans should receive equal treatment under the law.”

Tribal leaders in Oklahoma said Monday that Stitt’s decision not to renew the compacts for 2022 is part of an ongoing dispute between the tribes and the governor.

The agreement between the Cherokee Nation and Oklahoma has been in place since 2016. It was the first agreement of its kind and allowed the tribal government to issue hunting and fishing licenses at no cost to its citizens.

The tribe paid the state $2 per license, plus administrative fees, and bought 150,000 licenses per year. These sales have brought in an estimated $38 million in revenue for Oklahoma over the past five years. The original compact was set to expire on Dec. 31, 2018, but sitting governors, including Stitt, have granted three one-year extensions. The last extension ends on Dec. 31.

The Choctaw Nation signed a similar 50,000-license agreement with the state a year later for 2017-2019 that was extended twice. It has generated about $6 million for the state and also expires at the end of this year.

In a letter dated Nov. 30, Lt. Gov. Matt Pinnell informed tribe leaders that Oklahoma would not renew the compacts and offered “the opportunity to enter Hunting & Fishing Compacts that allow your governments to purchase licenses for your members at the same price that other Oklahoma citizens pay for the same licenses.”

Bad blood has been brewing between the governor and tribal governments since 2019, when he pushed to renegotiate gaming compacts during his first year in office. Cherokee Nation Principal Chief Chuck Hoskin Jr. and Chocktaw Nation Chief Gary Batton said in a joint statement with Choctaw, Muscogee, Chickasaw, and Seminole nation leaders that Stitt is undermining all collaboration.

“This is consistent with what we’ve seen from the governor since the (US) Supreme Court’s McGirt Decision,” Hoskins wrote.

The court case he mentions found that Oklahoma doesn’t have jurisdiction over serious crimes committed on tribal reservations by or against tribal citizens. The state has asked the court to reverse that decision.

Stitt agreed to extend the hunting and fishing compacts twice in 2019 and 2020, even praising them as partnerships that “capture federal funds for conservation efforts across our state while promoting hunting and fishing opportunities” among the tribes.

This year, however, Stitt’s office says he’s looking out for all 4 million Oklahoma residents by allowing the compacts to expire. If they had to pay full price, the cost for each license would be at least $42 for tribal members and could potentially bring in more revenue for the state than the rates negotiated in the compacts.

Hoskin contends Stitt is abandoning the “win-win” compacts and the best interests of the entire state because he does not believe in tribal sovereignty. So the tribes are taking action.

“We’re going to assert our treaty rights to hunt and fish. The other tribes are going to do the same, and honestly, we’ll do an excellent job. We’ll do so responsibly,” Hoskins said. “We would rather do so cooperatively with the state, but Gov. Stitt has abandoned cooperation with the tribes.”

“Under previous administrations, compacts regarding hunting and fishing licenses were a routine matter. They clearly provided great financial and cultural benefits to both the state and tribal members,” Batton said. “Unfortunately, Gov. Stitt has once again decided to let his personal concerns outweigh what is best for the people he was elected to represent, putting conflict above cooperation.”

Batton says tribal governments voluntarily worked with the state, and Stitt doesn’t understand the financial ramifications of his decision.

After the compacts have expired, beginning Jan. 1, the Cherokee and Choctaw Nations will grant permission for tribal citizens to hunt reservation lands only. Tribe members can still buy Oklahoma hunting and fishing licenses issued by the state at full price through normal channels.