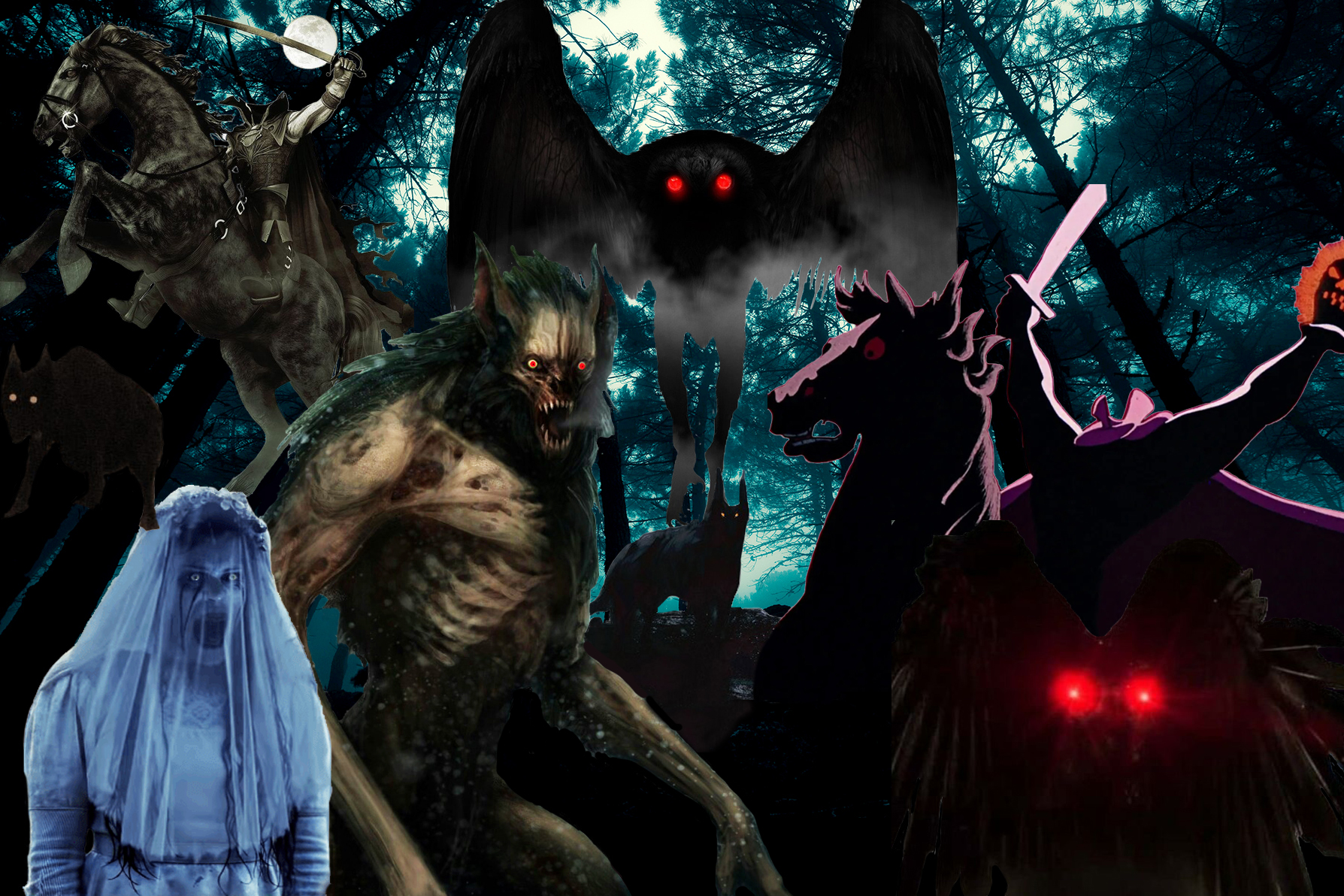 The United States is a large and diverse nation with a rich tapestry of folklore to call its own. Some of it is mystical and whimsical, some of it is terrifying. While a few local legends that make the ol’ neck hair stand on end have roots in other countries, some are uniquely American or have a distinctive stateside twist added to an Old-World campfire story.

We’ve explored a few native beasties already and now present five more terrifying American monsters, from an undead Hessian soldier hunting for a missing piece of himself and a Cajun werewolf to a harbinger of doom and something no long-haul trucker wants to see on the road.

Type: Infanticidal Lady In The Lake
Origin: Mexico and Southwestern US – 1800s

This legend has a bunch of variations built on a central theme. La Llorna was born of Latin American folklore and is also known as The Weeping Woman or the Wailing Woman: a ghost that roams waterfront areas, wailing in grief over her drowned children. While the details vary, La Llorna usually appears dressed in white and is always associated with a body of water. In some tellings, she will drown children who come too close to a river or lake.

There are many versions of La Llorona’s origin story. Usually, a woman named Maria marries a rich rancher and has two kids. She then catches her husband sleeping with another woman, flies into a rage, and drowns her children in a nearby river. Horrified by what she has done, she then drowns herself. Her spirit is then barred from the afterlife and cursed to haunt the body of water where she and her children died.

In another version, she has two children fathered by the rancher out of wedlock. When the rancher marries, she drowns the kids rather than have them be raised by their father’s new wife and then drowns herself in grief.

The first known reference to the story is a 19th-century sonnet by Mexican poet Manuel Carpio in which La Llorona is described as the tragic ghost of a woman named Rosalia who was murdered by her husband, with no infanticide involved. This version is most common in Mexico, where the legend of La Llorona is widely known.

In the American Southwest, La Llorona is used as a boogeyman story to scare kids into acting right and to deter them from playing near water. In Southern California, La Llorona is linked to the nunašiš, a mythological creature with a cry like a newborn baby.

Most of us know about the Headless Horseman from Washington Irving’s short story The Legend of Sleepy Hollow, published in 1820. This gruesome character is likely the most famous specter on this list, but did you know versions of the Headless Horseman date back to Europe in the Middle Ages?

In the Irving story, the horseman was once a Hessian soldier fighting for the British who is killed at the Battle of White Plains during the American Revolutionary War when a cannonball takes his head off and blasts it to pieces. Ever since, in the dark of night, his furious ghost springs from the Hessian’s grave (complete with a ghost horse) in Sleepy Hollow’s Old Dutch Church cemetery to search for his missing head. But Irving didn’t come up with the idea of a headless man who still rides.

South Texas has a similar story that inspired the novel, The Headless Horseman by Mayne Reid.

In the Old World, Ireland has the legend of Dullahan (the dark man), a headless, demonic fairy who rides a horse. He carries his own head under his arm and a whip made of human spines, which is pretty fuckin’ metal — way more metal than throwing a flaming jack-o’-lantern.

The Scotts have a ghostly headless horseman named Ewen who was decapitated in a clan battle at Glen Cainnir on the Isle of Mull.

In the 14th century British Arthurian poem Gawain and the Green Knight, Gawain beheads the titular knight who then lifts up his severed noggin and rides from the hall while challenging Gawain to a rematch the following year.

In European folklore, especially in the British Isles, a lone black dog is considered an evil omen associated with the devil, and it means death is coming. Not to be outdone, North America has several of its own versions.

In Meriden, Connecticut, locals have been talking about a small black dog haunting the Hanging Hills since the 1800s. It is also seen as a death omen, but not at first. According to The Connecticut Quarterly, “If you meet the Black Dog once, it shall be for joy; if twice, it shall be for sorrow; and the third time shall bring death.”

There is a broader and much younger New England legend that comes from southeastern Massachusetts’ so-called Bridgewater Triangle. In the 1970s, the residents of Abington were reportedly terrorized by a large and vicious black canine. One night, a police officer saw the creature walking along some train tracks and took a few shots at it. He said his bullets had no effect.

In the hotbed of supernatural weirdness that is the Jersey Pine Barrens, folktales exist about a ghostly black dog that roams the beaches and forests from Absecon Island to Barnegat Bay. However, this black dog is considered a harmless spirit. One legend says it’s the ghost of a dog killed many years ago along with his cabin boy owner: both victims of pirates on Absecon Island.

There’s a similar legend native to the American highway system. It’s said that a long-haul trucker who sees a black dog with red eyes in their peripheral vision while behind the wheel will face a deadly crash if they don’t pull over right quick.

The Rougarou is a bit of lycanthropic lore from Laurentian French communities. It’s a common legend in French Louisiana where the creature is sometimes called a “loup-garou.” The belief likely followed French Canadian immigrants to the region several centuries ago.

The Rougarou is said to have a human body and the head of a wolf or dog. Cajun legends say the creature prowls the swamps, cane fields, and woods around Acadiana and Great New Orleans, feeding on unfortunate people who cross its path — as if there isn’t enough in the swamp that can kill a person.

Like so many American monsters, the Rougarou is often used as a boogeyman story to get kids — and certain adults — to behave. Some believed a Rougarou would hunt down Catholics who broke the rules of Lent. The old French Catholics believed if you broke Lent seven years in a row, you’d become a Rougarou.

Although Hollywood largely made up what we think of as the “werewolf rules,” the idea of passing the curse of transformation from one afflicted person to another via a wound comes from the Rougarou legends. An afflicted Rougarou is under the transformation spell for a full 101 days, meaning they don’t turn back into a person for that entire time, even during the day. Once 101 days have passed, the curse can be transferred when the Rougarou attacks a person and draws blood, but doesn’t kill them. The original Rougarou then returns to human form and the victim inherits the curse — and can hopefully run off before the new Rougarou eats them.

The Mothman: Harbinger of Death

If you’ve seen The Mothman Prophecies, you know the basics about this mysterious creature of modern American folklore. The legend stems from reports of creature sightings in and around Point Pleasant, West Virginia, from the end of 1966 to the end of 1967.

During that time, about 100 people reported seeing a strange winged creature, and what began as a curiosity in the local paper soon became a national story. People have since claimed The Mothman is everything from an alien to a being from a parallel dimension.

Point Pleasant residents said The Mothman was larger than a person with equally large wings but with an indeterminate overall shape. Every report said the creature had distinct glowing eyes. One witness described it as a “large flying man with 10-foot wings.” Another said it looked like a “large bird with red eyes.” Another said his flashlight beam made its eyes glow “like bicycle reflectors.”

John Keel published a book about the Mothman appearances in 1975, which was adapted into the feature film mentioned above. He maintains The Mothman has also been seen in other locations, usually as a harbinger of a great tragedy or loss of life.

In his book, Keel says the creature sightings in Point Pleasant were related to the tragic Dec. 15, 1967, collapse of the Silver Bridge on the Ohio River.

The bridge was filled with rush-hour traffic and 46 people were killed when it failed. Two of the dead were never found. An investigation revealed a 2.5 mm-deep defect in a single steel beam in the suspension chain was responsible for the “tragedy on the river Ohio.”

An Annual Mothman Festival is now held in Point Pleasant the third week of September. The event draws 10,000 to 12,000 people and features a 12-foot-tall metallic Mothman statue. That sure is one way to lean into the local lore.

Read Next: The 8 Best ‘Cabin in the Woods’ Movies of All Time