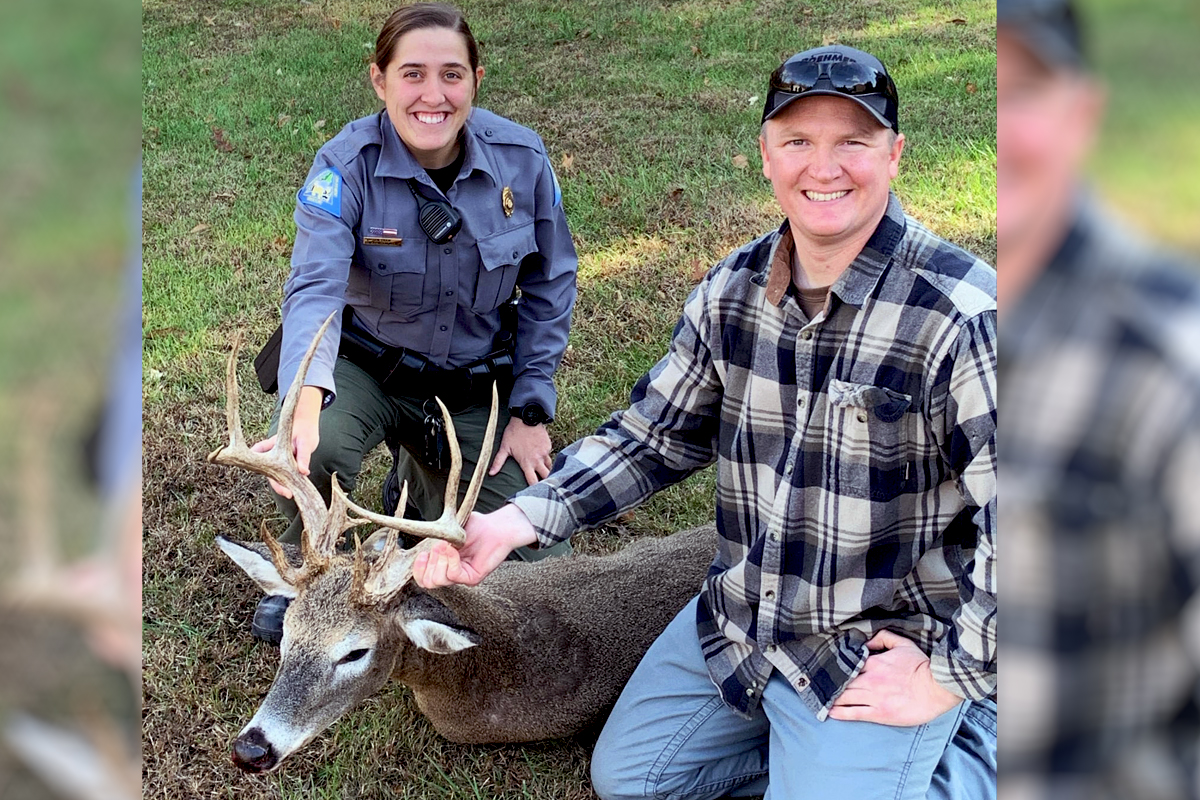 Shooting a 16-point buck isn’t exactly an everyday occurrence, but it’s not exactly unusual either. It is decidedly rarer to encounter a whitetail doe sporting 16-point headgear. That’s precisely what Missouri hunter Samuel Perotti shot just before the November deer season closed out. But Perotti had his eye on this antlered doe long before she ended up in his crosshairs.

Not only had she made several appearances on a friend’s trail camera, but he had also seen her in the field exhibiting peculiar behavior for a buck during the rut.

“Several weeks ago, we saw the deer being chased by some young bucks. So, that was [a] clue that it was probably the doe that we had on camera,” Perotti told a reporter.

His moment of truth came a few weeks later.

“I had my gun up just to see what it was, and I thought it was a normal buck,” Perotti said. “When it stepped into the clearing, it turned to look toward the blind that I was sitting in, and I recognized the deer. I immediately put the crosshairs on the shoulder and squeezed the shot off.”

After the deer was down, Perotti, like any excited deer hunter, was eager to inspect his kill.

“I just glanced at the rack, and the first thing I did was grab the rear leg and lift it up to confirm my suspicions. Sure enough, it was a doe,” he said.

Antlered does are rare, but a story like Perotti’s comes along every so often. In early November 2021, Virginia deer hunter Steve Johnson bagged what he thought was a 20-point buck that ended up being a doe. In October of the same year, an 8-year-old Maine hunter scored an antlered doe with his crossbow.

It’s impossible to know exactly how many antlered does fall to hunters each season in Missouri and many other states because it’s not information that’s usually required.

“It’s kind of hard to tell because when we have people harvest their deer, they have to check it as an antlered buck or a doe,” Missouri Department of Conservation agent Jessica Filla said. “So we don’t really know how many antlered does have been harvested.”

While antlered does aren’t common, how they grow their racks is no mystery; it’s a simple quirk of biology.

Antler growth requires a big boost in a deer’s level of testosterone. In certain instances, a female deer can have high testosterone levels that initiate the development of a branching rack.

However, not all deer that seem to be “antlered does” are true females. Some are hermaphrodite deer with both male and female sex organs somewhere in their bodies.

Other “antlered does” are pseudo-hermaphrodites. Also called cryptorchid males, these deer have internal testes, but their external organs express as the opposite sex. Cryptorchid bucks are sometimes called “cactus bucks” because they have multiple short misshapen points that resemble prickly desert plants. Their abnormal antlers are the result of abnormal testosterone levels.

Because Perotti’s whitetail had a mount-worthy rack, Private Lands Deer Biologist Kevyn Wiskirchen with the Missouri Department of Conservation doesn’t believe it was a true doe.

“In this particular instance where we’re seeing a large set of antlers with hardened antler, it’s probably not a true female,” Wiskirchen told the Springfield News-Leader.

Since any internal evidence ended up in a gut pile, it’s impossible to prove or disprove Wiskirchen’s statement.

Either way, Perotti’s 16-pointer will end up with a place of honor in his home.

“The antlered doe is at the taxidermist right now,” he said.

Read Next: Where Are the Deer Hunters? Michigan Hunting Licenses Down by 250K