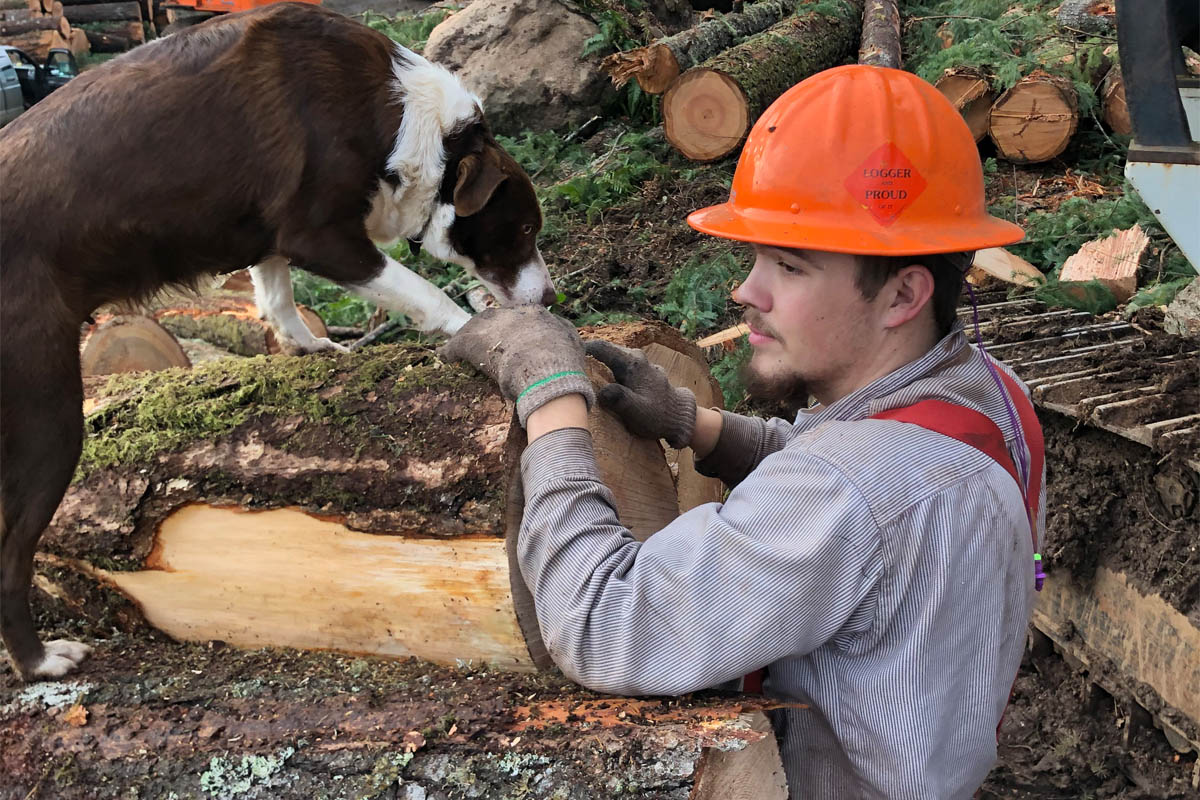 In a small, dead-end valley in Springfield, Oregon, on Camp Creek, three generations of the Petersen family still work the ranch they have owned since 1941. Over the decades, despite the majority of the land being devoted to a variety of things including turkey, cattle, and hazelnut trees, “timber has always been the stability behind the operation,” said Andy Petersen, the current owner.

The Petersen family is just one of the many family-owned logging operations that have worked tirelessly to keep up with American timber needs, an industry that has helped define the American culture of hard work and self-reliance since before the Revolution. Today, the U.S. is both the largest producer and consumer of lumber in the world, and the second largest exporter. This industry employs more than 500,000 people today, many of which are family operations like the Petersen’s.

The Petersen family bought their ranch when Andy’s father, Alan, turned four. But Andy’s family’s roots in the area go back even further. “My mom’s mom was born out here on a homestead up here on the hill, and all her brothers logged,” Andy said.

Andy’s parents have a long history together. “We’ve known each other since the second or third grade and been buddies ever since,” said Alan of his wife, Joan.

Alan grew up the youngest of three brothers. The ranch had been a hops farm before the Petersens bought it, but geopolitical considerations changed their focus. “World War II came along, and the troops needed a lot of turkeys, so we raised 18,000 turkeys on the place,” Alan said. “That went on through the Korean War, and then the government quit buying.”

Alan’s father, Oswald, lived to be 99 years old, and Andy said he never saw his grandpa quit working. “If there was something he could do, he did it,” Andy said. “That’s just kind of the mentality. I looked at my grandparents, and you start realizing that you’re indebted [to] a whole bunch to people who came before you.”

Throughout the change from hops to turkey to cattle, the ranch kept a portion of the land devoted to timber — specifically to Douglas fir trees.

“The timber is a natural thing here,” Alan said. “This country here wants to grow trees, the ground does. We have a few places where we have a rocky point or heavy clay ground where you might get some pine to grow, or white fir, but the markets on those two are just not anywhere historically what the Doug fir is, so if we can get Doug fir to grow, that’s what we want to grow.”

Alan grew up watching his father do the logging, and he and his two brothers took over the work as adults. “One older brother, he felled timber, and he liked to run the saw and cut the timber up,” Alan remembered. “He loved to cut wood. All year long, firewood even. I’m the youngest, and the one in the middle and I basically ran the cattle. But my older brother, as he got stuff out, I did the hauling. My other brother did the yarding with the Cat. We all worked together on it.”

This created a strong bond between them. “We wouldn’t have lasted that long if we didn’t. We would have been at each other’s throats,” Alan said, laughing. “All three of us were different, but maybe that’s what made us get along better.”

“We had an old logging truck my dad called ‘Old Ugly’ that was put together from about three different log trucks,” Andy recalled. “But the other ones didn’t look much better.”

He has fond childhood memories of the log pond. “My dad was the one who would load the logs and hauled them, and so I would often ride up with him to the mill, pull up alongside. As logs rolled off of the truck and into the pond, of course there’s a huge splash, and the truck was just rocking back and forth. I’m sure the first time that ever happened to me I was scared out of my wits. That was a real thrill as a little kid.”

Due to all the other work they have going on, the Petersens no longer do the logging themselves on the ranch, instead entrusting the work to a good friend. “He treats the place like it’s his own,” Andy said.

Andy recognized how the industry has changed since he watched his father and uncles work on the ranch as a child. “Just a guy or a couple brothers with a log truck or two, that small logging operation was pretty common,” he said. “You saw a lot of the old trucks on the road. The equipment has changed so much, the automation and specialization. Our falling on our property is solely by power saw. They come in and can move through a stand of significant acreage pretty darn fast.”

Although they no longer do the actual logging themselves, the management of the timber land still falls on the family. “The part I love is, we’ve never had anyone else plant one of our trees,” Andy said. “Our family has planted the trees. We’ve taken some of our hill pasture ground, we came to the recognition that it just wasn’t the best use of that ground. It’s really good tree dirt. And it wants to grow trees. So about 20 years ago we started that transition process, probably about 70 to 75 acres, and there’ll be another 20 in about five or eight years, we took that out of pasture rotation and put it into Douglas fir production.”

Managing the new trees isn’t an easy job. “Those first three to five years are so important in keeping the competition back for those young trees. We have blackberries out here that will grow 10 to 15 feet in a year,” said Andy. “We’ve done all the pre-commercial thinning ourselves. We’ve never hired that out.”

The whole family believes in a sustainable vision of ranching. “Certainly our livelihoods depend on us being good stewards of the valley,” Andy said. “We can’t live here for decades and decades — and, hopefully at some point, well over 100 years — and not take care of the place and hope it’s going to take care of you.”

But the political climate doesn’t make it easy for a small ranching family like the Petersens, from Andy’s view. “There are so many increasing pressures all the time as if we’re the bad guys, we’re doing all this environmental damage, and it simply isn’t so,” he said. “We’ve had two extensive rounds of testing on our creek up here, our main creek, and the testing has come out both times phenomenally.

“I’m just a huge proponent of the family farm, the family timber plot, whatever it is,” Andy continued. “The longer we can keep families on these properties — it’s not just for the family’s good, that’s for the public good. The properties that are lived on and closely managed by families tend to be the best managed timber lands that there are because they have a vital interest in them.”

The extended families descended from Andy’s grandfather, the original owner, have partially returned to the land — one of his siblings and four of his cousins now live on adjoining properties. But Andy, his daughter, Hailey, and Hailey’s husband, Matt, own and run the ranch. Matt was the impetus for the family to start transitioning much of the land from cattle to hazelnut production.

“We turned the place over to Andy and our granddaughter,” Alan said, “but we try to help out whenever we can. We call ourselves the gophers — we ‘go for’ this and ‘go for’ that. I know they’ll take good care of it. Their love for the land is maybe greater than mine is.”

“The end goal is that God blessed us with a beautiful place to live, to make a living, to raise families, and it’s our job to take that stewardship seriously,” Andy said. “And I think most people I know in the logging industry, whether they’re the loggers or the landowners or both, feel similarly.”

This article was originally published Jan. 31, 2020, on Coffee or Die.