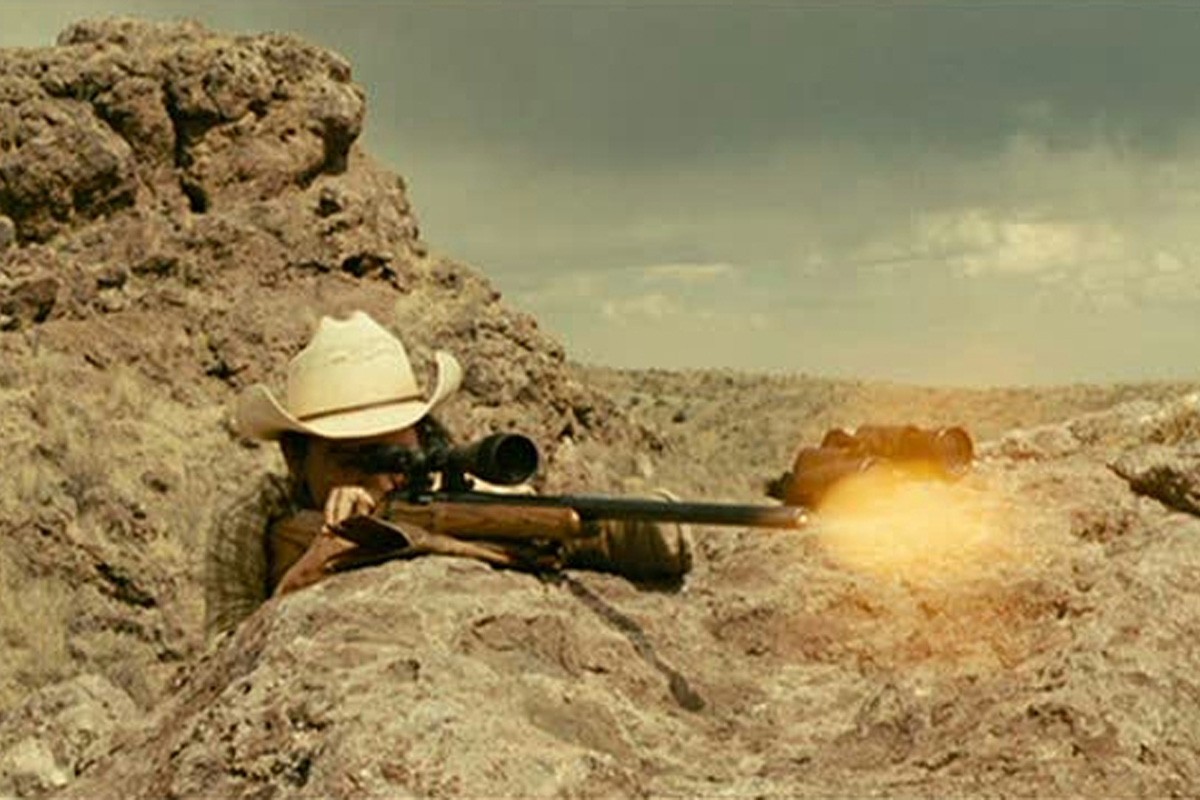 For the many unfavorable, unrealistic depictions of hunters and hunting in movies, you’ll find only a small handful that feature more positive, truer-to-life examples. Two films from the past couple of decades stand out in this regard, and believe it or not, one almost makes hunting a central element of its plot.

No Country for Old Men

This movie, set in 1980 and based on the incredible novel of the same name by Cormac McCarthy, certainly doesn’t focus on hunting, but the first scene where we meet protagonist Llewelyn Moss (Josh Brolin) is one of the better hunting scenes ever committed to film.

Moss is hunting pronghorns on an open Texas plain. He’s set up on a large boulder, which is providing him good concealment and a rest for his rifle. He has taken off one of his boots to act as an improvised shooting bag as he takes careful aim at the animal he has selected from the herd, adjusting his scope elevation. Spot-and-stalk hunts sometimes require a very quick setup to take a shot, especially on spooky animals, but if things go right, hunters in this environment will get the time to set up a shot just like this.

He squeezes off a shot, and we see the animal rear up in the scope and then run off. After automatically cycling the action, Moss whispers to himself, “Shit” — like everyone does when they realize they’ve hit an animal in the guts — and gets ready to look for a blood trail after picking up his spent shell casing from the dirt and slipping it into his shirt pocket. He doesn’t have much equipment on him, but he has what a hunter would truly need for a short day hunt — his rifle, his hat, his boots, and a pair of good binoculars.

Solid tactics, realistic equipment, and a hit on an animal that looked real, along with the reality of having to blood trail an animal that isn’t cleanly killed: It happens.

While this is a pretty great hunting scene, it ain’t perfect if you look at the small details. The filmmakers slipped up on the gun and optics selected for the movie when considering the time period and the rifle used in the book. The footage of the pronghorn in the scope looks quite real. It had to be taken from real hunting footage, yet curiously a bigger pronghorn buck stands just in front and quartering away from the antelope that got shot.

In the book, Cormac McCarthy describes Moss’ rifle as a “heavybarreled .270 on a ’98 Mauser action with a laminated stock of maple and walnut. It carried a Unertl telescopic sight of the same power as the binoculars.”

McCarthy knows his guns. The scope he references is the optic that was paired with the M40A1 sniper rifle used by the USMC beginning in 1980. It was the first scope to use a mil-dot reticle, while the reticle in the movie is clearly a classic crosshair with no mil-dots.

The rifle he describes sounds an awful lot like a Parker-Hale 1200 series rifle, which was adopted as the M82 sniper rifle by several Western countries beginning in 1972 but not the United States. This all means Moss is serious about his rifle, as any good Texas boy would be.

The scope used in the movie isn’t a Unertl, but it’s close in appearance, especially considering it’s out of focus in close-ups. It’s mounted with rings that appear to be clamped to Picatinny or Weaver rail sections on the receiver. In 1980, scope rings like this didn’t exist yet. While the Unertl was an early example of a scope with ballistic turrets, on the real-life scope the turrets were quite different from what is shown on film.

The rifle in the movie is a Remington 700, which is a good substitute for the Parker-Hale, especially considering it would likely have been the rifle Moss came in contact with the most in Vietnam as the M40A1 rifle, but judging by the stock, the movie gun is a Remington 700 VLS, which wasn’t produced until 1995. In short, the rifle, scope, and scope rings are anachronistic — but this is peak Gun Nerd level of nitpicky. No Country for Old Men did an excellent job depicting hunting how it actually unfolds.

Again, this movie isn’t really about hunting, but the main character, Cory Lambert (Jeremy Renner) is an agent for the US Fish and Wildlife Service stationed near the Wind River Indian Reservation in Wyoming. Like in No Country, Lambert is introduced to the audience via a hunting scene, as he takes down a coyote threatening a flock of sheep.

Later, he tracks a mountain lion that has been killing local livestock, the trail ultimately leading him to the body of a dead woman. He then uses his tracking skills and local knowledge to help an out-of-her-depth FBI agent find the killers as the mystery unfolds.

The hunting scenes, and Lambert’s gear, are all pretty spot on. It’s one of the few movies that depict someone using a chest pack for their binos and other small items, and he actually uses different guns for different purposes and adds or subtracts layers of clothing and snow camo depending on the changing weather conditions and what he’s doing.

When hunting the coyotes, Lambert is set up prone and camouflaged from a small hedgerow looking out on the flock from a distance. He uses an appropriate scoped, white camouflaged Remington 700. The shot on the coyote does appear to be real hunting footage, but when the first coyote is hit, the others don’t run, which is rare. When heading into steep country in pursuit of the mountain lion, he switches to a scoped Marlin 1895SBL in .45-70, with a Ruger Super Blackhawk single action revolver in a Western-style holster and gun belt as backup. Lambert is even briefly shown reloading his own .45-70 ammo, and even that is absolutely spot on.

This movie also features one of the best shootouts in recent memory during its big climax, and a simultaneously gratifying and hopelessly sad ending. I only have one gripe, and it’s a common movie flub, again related to firearms.

At the end of the utterly awesome final shootout, Lambert takes a series of improbably fast and accurate shots from what looks like 500 yards plus with his .45-70 on multiple targets, all of which are hits. The first couple actually appear very realistic, but for some reason, the last is cartoonishly overpowered. His bullet comes through the window of a double-wide trailer, and launches the man it hits clear across the room, almost through the window on the opposite side. This is not how people or animals react when hit with bullets of any size from any distance.

But I get it — in the context of the scene — it looks awesome and it’s really satisfying. Renner’s gun handling and the hunting scenes are excellent throughout this movie.

Read Next: 7 Underrated Wilderness Movies You Should Give a Chance