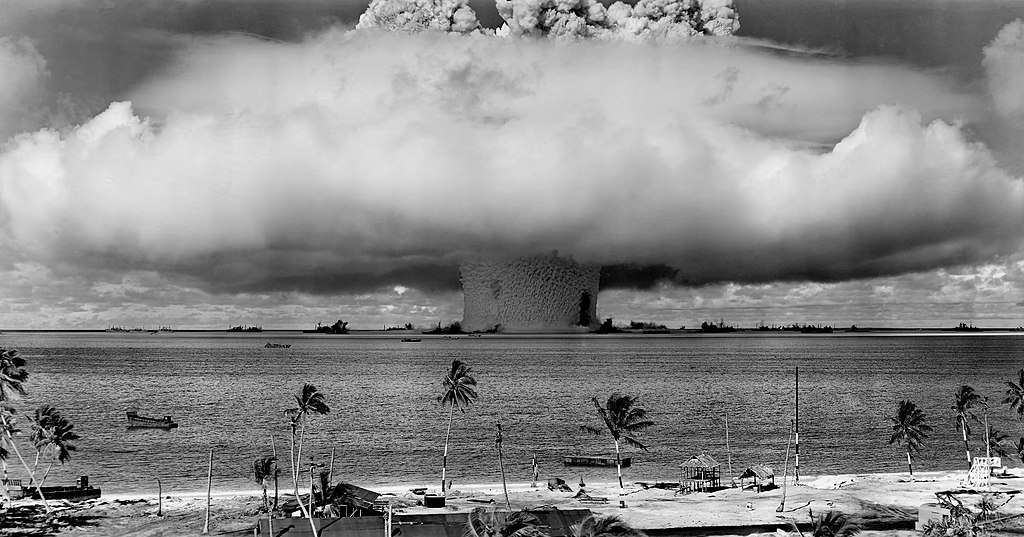 Will there be a sixth human extinction event in the future that’s primed to end man’s reign on Earth? Scientists say most definitely yes.

Volcanic events on a global scale oxidize sulfur dioxide to create acid rain; an asteroid strikes blacken out the sun and collapses the food chain; the sea level falls and destroys life on the continental shelf areas; or extreme fluctuations in global temperatures make large areas uninhabitable. It has all happened before to 99.9 percent of the species that have lived on Earth. There’s no doubt that a human extinction event will happen.

Forty years ago, the planet’s death was, for sure, going to be at the push of a button. It was a mushroom cloud brought about by a nuclear barrage. Remember “WarGames” and “The Day After”? In the 1990s, popular opinion was certain that our demise would come from an asteroid impact; think Bruce Willis’ “Armageddon” and the less popular “Deep Impact.” Then came zombies, diseases, and widespread fatalities; the “The Road,” “World War Z,” and “Children of Men” come to mind. It seems that we’ve been planning our end since the dawn of film, and there’s always a new situation.

There are some certainties to the extinction of the human race, though. For starters, the sun will eventually swell into a red giant. From there it will consume the entire planet. Don’t worry though, as that won’t happen for another 5 billion years or so. Changing environments, global catastrophes, pandemics and more could wipe us out easily (as we got a taste of this year).

Or we could evolve sufficiently far from our current form that we become a new species altogether (we did so from Neanderthals, Denisovans, and Homo erectus); Homo sapiens would simply die off, though our lineage would continue. However, the timeline for these events is long and not particularly threatening to our current way of life. Instead, there are many more practical ways for a human extinction event on Earth.

The detonation of a nuclear bomb from the arsenal of a thusly armed country (a couple of which aren’t so friendly to the U.S.) could cause a fatality rate of nearly 100 percent in the blast zone. That zone would stretch out to a radius of a few miles. Meanwhile, severe damage could reach six times as far.

In addition to the high death toll from an all-out nuclear war that consumes the planet, nuclear winter is the bigger issue for the survivors in the aftermath of the “big one.” This is when the clouds of dust and smoke released during the blast blanket the planet. They block out the sun, causing temperatures to drop, possibly for years. Let’s say the U.S. and Russia (the two countries with the largest stockpiles) detonated a few thousand nuclear weapons. Not only would temperatures drop in the ensuing nuclear winter, but crops wouldn’t get sunlight, and they’d die quickly. The food chain would be disrupted, and life would be slowly snuffed out.

A big worry here is the arsenal of nukes. While numbers have fallen over several decades, the U.S. and Russia have just under 7,000 warheads each. But the U.K., France, China, India, Pakistan, North Korea, and Israel all have nuclear weapons, too. Any number of international events could spark a catastrophe ending in an all-out launch of everything.

The biggest threat in this scenario: Accidental launch (e.g. the “WarGames” scenario) or miscommunication between any two countries. A few times since the 1960s, Russian officers (and, in 1995, the U.S.) narrowly avoided launching a nuclear weapon in response to what they’d later find out were false alarms.

Unlike nuclear weapons, which require complex engineering, biological and chemical warfare can be developed at a relatively low cost and with easily attainable materials. In the past few years, for example, the Syrian government has used chemical weapons in the civil war that’s been ravaging the country. These chemical attacks using sarin and chlorine have underscored the damage that chemical weapons can do. Weaponized toxic chemicals could do tremendous harm if released into the air or into the water supply around the world.

Biological weapons represent a greater catastrophic threat. Advances in biology have made very real the possibility of malicious governments (or organizations) creating harmful pathogens for weaponization—or innocent researchers accidentally releasing a lethal infectious bug out into the world. In the event of a fast-moving pandemic, the world would be pretty vulnerable, as we have seen this year.

A United Nations panel of scientists released a report saying that we only have 12 years to keep global warming to moderate levels, something that proponents of global warming have been saying for decades now. Projections of the effects of climate change vary depending on the source. However, the modeled situations and scenarios don’t look good.

A best-case scenario is an increased frequency and severity of hurricanes, which happened in the Atlantic this hurricane season. Other predictions suggest the loss of the majority of global agricultural land and freshwater sources, with major coastal cities around the world ending up underwater. At worst, food production halts, governments fall, and the human civilization as we know it would come to an end.

COVID notwithstanding, twice before in our history, plagues have swept across the world, killing an estimated 15 to 50 percent of the population in only a few decades. They occurred in the 6th and 14th centuries. Though we haven’t experienced a plague of that magnitude since there is a great risk that a new infectious disease could cause another outbreak. This is especially true because of how connected the world is today; a short flight can put anyone anywhere in the world within a day.

Although deadly diseases with the capacity to spread around the world quickly are very rare, they do happen. While COVID didn’t stand up to the estimates of it being a global pandemic, the 1918 flu killed more than 50 million people; that was just a century ago. Outbreaks of SARS and Ebola in recent years also remind us of how vulnerable the human population is to infectious diseases.

Antibiotics, our greatest defense against disease, are becoming less effective as some strains of bacteria become resistant to them. Antibiotic-resistant bacteria are responsible for an estimated 700,000 deaths annually. If we don’t develop new advances against antibiotic resistance, that number is estimated to be 10 times what it is today in only a couple of decades.

Asteroids are rocks that revolve around our sun. And even though space is huge, they occasionally collide with other things like moons and planets, including Earth. An asteroid large enough to cause a global catastrophe hits Earth every 120,000 years, scientists estimate; that’s likely what killed the dinosaurs during one of the five extinction events mentioned previously.

If an asteroid even one-tenth the size of the one that caused that mass extinction hit Earth today, the results would be more than devastating. If the asteroid didn’t cause a fireball that circled the globe, wiping out every animal and plant in its wake, it’s estimated that it could release enough dirt and debris into the atmosphere to block the sun for months and cause a famine that would kill billions.

NASA announced in 2011 that it had mapped more than 90 percent of the near-Earth objects in space that are larger than 1 kilometer in diameter. However, none of them are likely to hit Earth in the near future. But every year, stories fill the news about unknown rogue asteroids making a close flyby to Earth. There is also a lot that NASA doesn’t know about smaller objects that, while unlikely to cause a global catastrophe, could have a big enough local impact to disrupt social and economic systems.

There is evidence that a super-volcanic explosion about 74,000 years ago ejected so much debris into the atmosphere that scientists believe it caused the Earth to cool by many degrees. That brought on an ice age and obliterated a great deal of flora and fauna found on Earth. But what about a modern human extinction event? How likely is that to happen again?

Data suggests that a super-volcanic eruption occurs on average every 17,000 years. If that’s true, the planet is overdue for a dustup. The last one of note was 26,500 years ago in New Zealand. Scientists are keeping a close watch on several areas of risk, including Yellowstone. There is no way to anticipate super-volcanic eruptions more than a few weeks or months in advance (similar to our inability to predict regular volcanos). There’s also really no way to mitigate the destruction that a supervolcano releases on a mostly unsuspecting planet.

Can We Survive After a Human Extinction Event?

Nick Longrich is a senior lecturer in evolutionary biology and paleontology at the University of Bath, U.K. As for a human extinction event, he writes, “Humans have vulnerabilities. Large, warm-blooded animals like us don’t handle ecological disruptions well. Small, cold-blooded turtles and snakes can last months without food, so they survived. Big animals with fast metabolisms—tyrannosaurs, or humans—require lots of food, constantly. That leaves them vulnerable to even brief food-chain disruptions caused by catastrophes such as volcanoes, global warming, ice ages, or the impact winter after an asteroid collision.”

Humans are a species of survivors (lasting so far for nearly 300,000 years), adaptable to a wide range of environments and situations, completely widespread across the planet, and very abundant, pushing 8 billion in total population.

Longrich continues: “We’re so uniquely adaptable, we might even survive a mass-extinction event. Given a decade of warning before an asteroid strike, humans could probably stockpile enough food to survive years of cold and darkness, saving much or most of the population. Longer-term disruptions, like ice ages, might cause widespread conflicts and population crashes, but civilizations could probably survive.”

If something were to wipe out 99.9 percent of everyone on Earth, there would still be 8 million people around to pick up the pieces. That’s bad luck for a lot of people, but good luck for the species’ survival for another couple hundred-thousand years.

This article first appeared in Ballistic Magazine on March 21, 2021.

Read Next: Survival Garden 101: What You Need to Plan Before Planting