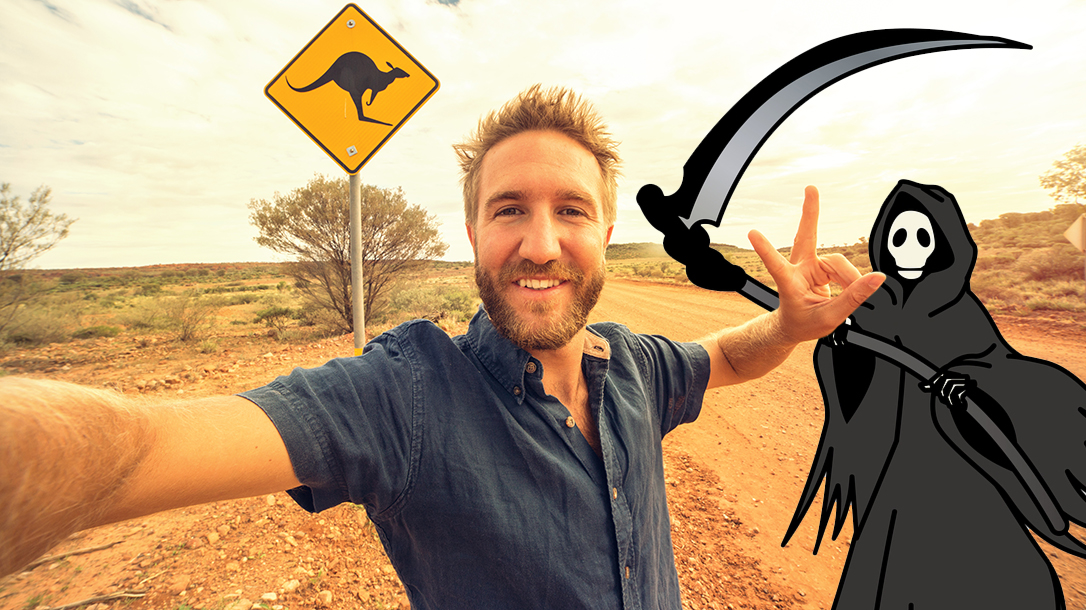 Running free through my grandfather’s sugarcane fields and pedaling bikes through the rugged Aussie outback defined my Australian childhood. Then there were the car rides across dusty backroads, where petrol (gas) stations were a rarity—as was the sight of another human.

Snakes would sometimes slither onto the ceilings. Deadly spiders lurked in our shoes. Dingoes howled at the moon, and roads became so steamy that they turned to tar. Yet, here I am, a full-fledged adult who made it through. The fun fact is that most of us do. So, what are the critical tips for surviving the sunburned outback where everything is trying to kill you?

Oz might have some 173 species of snakes and a chunk more venomous crawlies. But the chances are that a critter isn’t going to be your brush with death. Temperatures in the Aussie outback can soar beyond 120 degrees in dawn’s early light and broil your brain pretty quickly.

The heat of the bushland is raw and unfathomable. Sweat strangles you and streams into bodily crevices you did not know you had. As naughty school kiddos, we learned at school how to keep the water levels up. We tied clear plastic bags over tree branches and watched over weeks as water collected in the bags as emergency backups.

Be A Water Warrior

But we knew crisis calls for an array of options. Other tricks include following fresh animal tracks to water and sapping water from plant roots. Squeeze some drops out of succulent ground plants. Run the AC in your car with the windows down and pool the leaked water. You can also examine the directions of seed-eating birds. They fly in orderly formations when water-bound and are usually in a messy group when gliding away.

And whenever you get that life-saving liquid …

“Drink! Do not sip your water,” Bob Cooper, one of the world’s leading survival experts, told me. “Always dress and pack for an unexpected night out. Know the priorities of survival. Most people erroneously think it’s food.”

But good tucker is way down on the list. Bob said that in addition to securing fluids, one should focus on first-aid, correct clothing, shelter, fire and signaling for rescue.

Aussies are proud of their badass fauna and the funny things that thrive in the scrub. Yet, at school, we are made to repeat that the best way to survive snakebites is just not to get bitten. How? Snakes are shy, so if they strike, it is from a place of fear. Please don’t go around trying to catch them with your bare hands and naked feet. If they do get you, be sure to have a few compression bandages on standby. Without bandages, you have about 45 minutes before the venom slides through your system and into the bloodstream. If you have compressed the site, you can make it for up to twenty hours as you head to the hospital.

Here is another great survival tip. If someone warns you that a swimming area has a “Charlie,” don’t splash there. Here in the Aussie outback, It’s lingo for a crocodile. So, there is a possibility it’s a six-foot “freshie” (freshwater crocodile) or a twenty-foot saltwater thing. Hard pass.

When it comes to taking a dip, keep your eyes peeled for cone snails. Those extremely deadly predators hang out in mobs and wait for kangaroos and humans to pop by. They launch a stinger and stuff their prey with neurotoxins.

Be warned of the stonefish too, the most venomous fish on the globe. (My grandfather always made my sister and me wear shoes in the river for this very reason. But he rarely followed his own advice and was routinely rushed to the ER.) These fish look like swimming rocks, chilling in the bottom of the water in camouflage. But if you step on one, it will likely send a spit-full of venom through your veins.

The stoners also pose on land, disguising themselves with the rocks. They can survive without water and remain there for almost an entire day. Wear your shoes in and out of the river.

Also, some of the birds are brutal. Really brutal. There are the kooky, flightless, fruit-eating cassowaries, a cousin to the turkey. But the cassos can run faster than 31 mph and grow up to 6 feet tall. If they want to kill a living thing, they typically go for the abdomen. So, don’t try to feed them. Don’t be their friend. Keep calm and move away.

Another perilous bird is the magpie, better known as a “Maggie.” She surfaces in the spring with the belief that everyone wants to steal her young from the nest. She is big and black and white. You might hear that horrific flap and slap of her wings behind you when you are walking. Then it’s on. The swooping feels as though it never ends, her attacking body going back and forth to pull off chunks of your scalp and peck around your eyelids.

We have experimented with deterrents: sunglasses (“sunnies”) on the backs of our heads and drawing faces on the tops of our hats. But Maggie isn’t fooled easily. It’s best to just put your head down and run. Run until you are far enough away from the nest that she will stop circling. Then stop by the doc for stitches if you need them. We’ve all been there a time or two or more.

Some—OK, a lot—of the spiders suck too. But the worst of all is the redback. They are black with a signature blood stripe on their abdomens. As kids, we sang songs about people who got gnawed while sitting on the toilet or “loo” or “dunny,” if you want to be serious about the vernacular. Those spiders are no myth. When I was about six, a friend came over to play on an old rocking horse. I watched, incredulous, as the red-striped thing crawled out from the horse’s mop of faux hair. It bit my friend, who was innocently rocking away.

I told my mum because my friend started to cry. We did a runner to the local doctor’s office to get the antivenom just in time. So, wear your gloves when gardening and rollover logs and old pieces of furniture too. Shake out your shoes before you stick your feet in them. And steer clear of rocking horses with fake hair.

Staying alive in the unforgiving Aussie terrain also comes down to how well you know your vehicle. Wedged in between the science and physical education parts of the school day, many classrooms will have a good-ole session on learning how to fix an engine, change a flat or jump-start the station wagon.

For Aussie outback kids, dull road trips into “woop-woop,” or Oz speak for the middle of nowhere, are part and parcel of growing up. Knowing how to repair a car on the blazing backroads or how to yank it from a riverbed could mean the difference between life or death, with dehydration looming on the hot horizon. We are taught that staying with the car is usually the best course of action if getting it going again fails. A vehicle can be spotted far better from the air than a person.

And fair warning: Kangaroos are a recipe for roadside disaster too. I was in three ’roo-related accidents, all before the age of sixteen, and all involving the giant marsupial bouncing out from nowhere in the night and slamming through the windshield. Night ride with caution; it is a literal leap of luck.

Your Shadow Is Your Mate

As Aussie ankle-biters, we also learned a thing or two about navigation on either side of a mathematics class. It becomes customary to observe our shadows for navigational purposes. Ensuring that your shadow is in the same spot as your body for roughly 20 minutes is a sign you are moving forward in a straight line. After that, the sun will begin to shift, and thus, your shadow will as well.

If touring down under, it doesn’t hurt to hone in your fire-lighting skills in advance, either. Matches are awesome, but if your supply got splashed by your bottle of beer (a “stubby,” we say), there are other ways. In such a situation, dried kangaroo poo is a beauty. Place one under a magnifying glass (keep that tool in your kit) and observe the flame fire up in a flash.

Moreover, get comfy with signaling. We had entire school trips devoted to being thrown out into the woods and being forced to practice all kinds of choreographed routines and unoperatic choruses to draw attention to ourselves. Note that three of anything is a sign of distress—whether it be a signal fire, a whistle blast, light flashes or a drawn-out “Cooooooo-weeeeeee!”

Remember, if you are in an “iffy” (translate as risky) situation, it is natural to be scared. Just don’t f— it up by panicking. Save your energy for pure survival. Mother Nature will hate on you sometimes, but she will also help you through if you learn her ways.

And don’t let survival guides and statistics scare you out of a frisk down under. With its cultural roots of “mateship” and its majestic diversity — from coarsened plains to emerald surf — Australia will love you. But she will love you wild.

Read Next: 10 Outdoor Survival Skills That Everyone Should Master