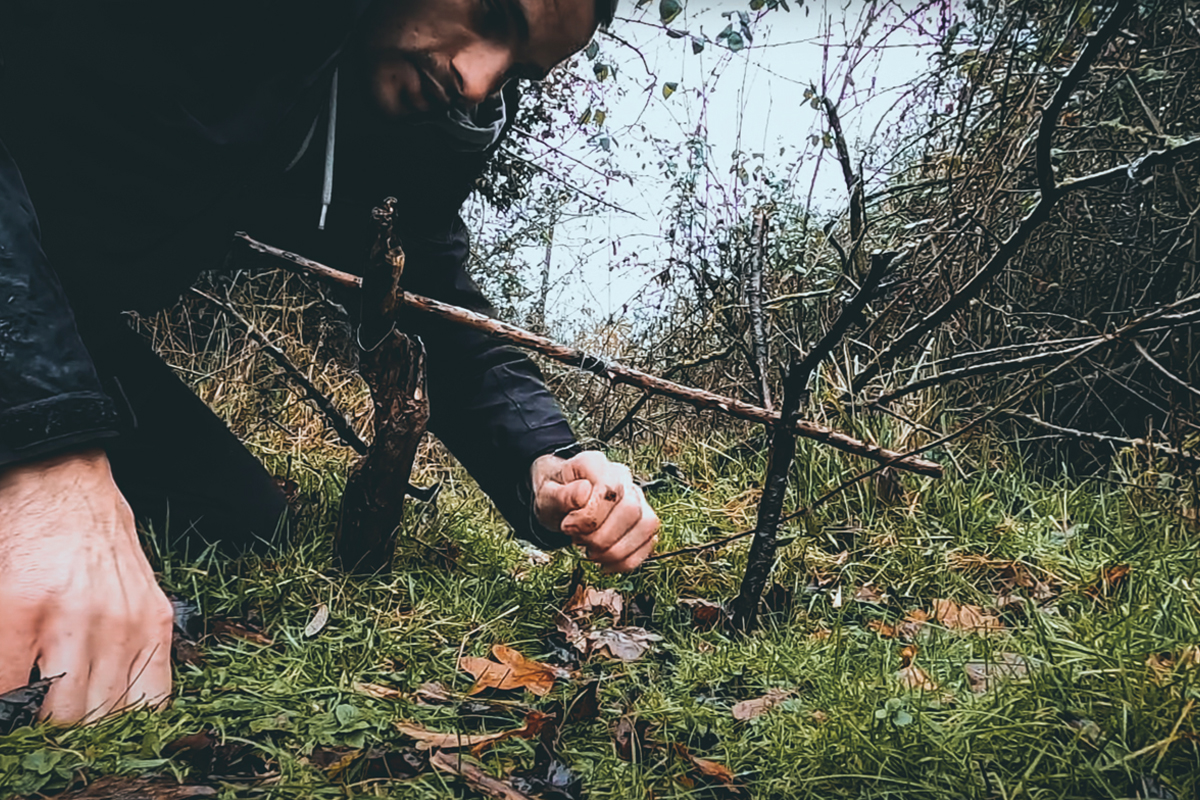 In serious times, trying to put dinner on the table or just on the wood stump you are sitting at can be tough. This is even more challenging without a gun. Fear not, weary survivalist, there is an answer: It’s time to learn how to make a rabbit snare.

Rabbit snares are great in these situations because they work without any direct interaction from you. You simply set it, then go about your day until it’s time to check it. Also, you would be well served to actually set multiple traps to increase your chances of success. In fact, if you are serious about your rabbit stew, you will set upwards of 30 snares. This sounds like a lot, but we must do everything possible to increase our chances of success. The way of the wild will show you that there will be bountiful days and barren days. These snares work well almost anywhere in the world and are easy to make.

A rabbit snare is an utterly simple tool. There is no triple slip knot tied to a tree limb supporting a giant pointed Predator-slaying log. It is mostly just a loop of cord or wire that will grab the rabbit’s head. Now I know that this all looks good on paper, but it does take a little fine-tuning and finesse that can’t be expressed in words. In short, you will need to tinker with it to find your snare mojo.

Where to set the snare is important as well. Look closely at the ground and you will begin to see evidence of animal activity. It could be bent over grass or even rabbit scatt (that is rabbit poop for those of you who slept through natural science class). Once you find this area, tread lightly so as not to disturb it.

It’s Time To Make Some Snares!

To make the noose part of the snare, tie a small loop at the end of your cord or wire.

Now, slip the other end through that small loop. This creates a slip knot noose of sorts that will close around the rabbit’s neck.

Find a low-lying branch over the trail you will be working on. If there is none available, use some small dead fallen branches to create a place to hang the snare. Tie the loose end firmly around the branch and set the loop at rabbit head height. You can enhance the snare by placing a rock or small branches to the side of the trap to more effectively drive the rabbit in. You are essentially creating a funnel for the rabbit. Be careful not to disturb the area too much, however.

The rabbit uses this trail or area for a reason and disturbing it will not go unnoticed. Small game like this are very wary and even small things can drive them off. The plan now is for the rabbit to start down the trail that it already knows and simply walk through the snare. As its head goes through, the line tightens around its neck, and it is trapped. The snare will continue to tighten as the rabbit fights, making it impossible to get free.

Patience Is A Virtue You Must Make Time For

Now it is just time to wait. Come back every day to check all your traps. Leaving a snare unchecked can lead to your prize being feasted on by a coyote or other scavenger. It can also destroy your trap and lose your cord. T

his version of a snare is considered static which means the rabbit simply gets snared. There are more dynamic versions obviously, but simple is best in this situation. Understand that your snare does not have rabbit radar on it and at times you may get something other than bunny. Just remember that beggars can’t be choosers. Be thankful for the meal that decided to join you that day.

Another important skill is actually cleaning the rabbit and getting it ready for your fine dining. That is for a later article, however. For those of you who may be a little more proactive, there are actual rabbit snare kits available for purchase. These make a great addition to a bug out kit or survival stash. People have been snaring rabbits since the dawn of time. This small game is generally plentiful and a good source of protein. Being able to build a simple but effective rabbit snare is certainly a skillset you want to have.

READ NEXT – How To Trap Critters in Cages