TJ O’Shea attracts the occasional odd look as she steps down from the cab of her big rig in a skirt, combat boots, Waxtrax hoodie, and fedora. She could be anywhere from Florida to Idaho, spending 14-hour days listening to audiobooks while flying down America’s interstates— Robert Jordan’s The Wheel of Time series has been her preference lately.

She may not match the stereotypical image of someone who crisscrosses the country on long-haul routes, but that’s because she only recently changed the course of her life: At 45 years old, she dropped everything to become an over-the-road truck driver.

By the time O’Shea was 17, she had been kicked out of her childhood home and was living on her own in Chicago, supporting herself in office jobs. She worked like that for 25 years, raising two kids in the process. Over time, she grew dissatisfied and felt stuck.

After her second marriage ended and her children were grown, she decided to pack up and move across the country. Anything that didn’t fit in her old Subaru was ditched. As she drove, she realized how much she felt at home on the road. All her adult life, after any fight, she always relieved her anger by getting in the car and driving in no particular direction. She never knew where she was going — and usually didn’t care.

When she reached her destination, she realized that she was doing nearly the exact same thing but in a different location. Her change hadn’t been dramatic enough. But everything fell into place one day when she found a female trucker’s blog.

O’Shea hasn’t had to endure harassment yet, but her gender did make the training difficult. Despite some growth over the last two decades, only 6.2 percent of truck drivers are women. The first stage of her training was supposed to be three weeks of riding alongside an experienced driver, but there were no trainers who were willing to work with a woman for fear of sexual harassment charges. Instead, she had to take an in-house course and missed out on valuable time on the road. During the second phase of training, she was required to drive 30,000 miles while trading off with a trainer. She had to ask for a replacement after the first trainer wouldn’t stop watching porn while driving.

“Fuck you, I hope you get ass cancer!” Suffice it to say that the relationship with the new and verbally abusive trainer she was assigned didn’t last long. But then again, O’Shea has never been the type to be pushed around. Her third trainer was a better fit, and once she had her commercial driver’s license (CDL), she was off and running.

Now she owns her own business. She contracts with a larger freight company but has the freedom that comes with being completely in charge of her new life.

But as any trucker might tell you, the hardest aspect of this job is the loneliness. She knows that she will never have a permanent home.

At the end of a long day, she peruses Facebook. It’s not uncommon for her to see that she has missed out on various family gatherings. Communication is hard; she can’t text while driving, and no one wants to talk on the phone anymore.

“I’m a child of the ’80s,” she laments. “I miss being able to sit and chat for hours about everything and nothing at all.”

While she’s lost that time with her friends, she has connected with a much broader spectrum of people than she ever did working retail or in a big city office.

“I’ve met guys with advanced degrees, retirees who didn’t want to sit at home, and couples who trade off driving,” she said.

There are grizzled 70-year-olds who are 40-year veterans of the road, as well as new drivers in their early 20s who are too cocky to check their kingpins (the pivoting mechanisms connecting cabs to trailers) before driving off into traffic.

O’Shea recalls a single mom she met on the road whose son lives with his grandmother. She sacrifices so that he can have a better life with all the things she never had growing up. The average truck driver can expect to make $45,000 a year, but owner/operators like O’Shea can make over $100,000 by cutting out the middleman. A lot of truckers put that money right back into stocking their cabs with everything from PlayStations to big-screen TVs.

“I watch guys drop a thousand dollars like it’s nothing,” she said. “I’ve seen trucks completely decked out.”

She’s also seen the ugly side of truckers on Facebook groups where drivers “were taking pictures of people that were struggling and making fun of them.” And when it comes down to it, she knows that everyone is judging her. She’s never felt unsafe in a truck stop, and physically she can be intimidating — she exudes confidence. When she pulls over for the night, she uses apps that list which stops are the safest and cleanest, and which ones are most commonly frequented by underage prostitutes — something she has unfortunately seen firsthand.

Nothing changes the one constant worry running through her head though: “I’m going to kill somebody one day.” As a car cuts her off and slams on the brakes in a major metropolitan area, she thinks, “I’m not going to die. You’re going to die. I’m carrying 80,000 pounds behind me!” Every trucker fears a fatal accident. There are over 4,000 fatalities every year in accidents involving trucks, and only 700 of those fatalities are drivers. Flipping a truck or dropping a trailer can end careers and lives.

Like any professional, O’Shea is annoyed when people disregard the importance of her contribution to society. She knows that other drivers on the road regard trucks as a nuisance.

“This isn’t a pleasure cruise, I’m at work. If you purchase something at a store, it came from a truck,” she said. “I don’t think people really understand the role that trucks play.”

Driving through rolling hills, down a narrow country road between Georgia and Alabama, O’Shea sees a family of deer jump across the road ahead of her.

“I’m the type of person who looks for the beauty in things,” she reflects. And if there’s one thing she has plenty of these days, it’s time to think. “We live in a beautiful country, and most people only see it in snippets.”

It’s hard for people to leave their own bubbles, to see all the different things that are out there. If they would just take a leap of faith!

She turns off her audiobook and sits in silence. Watching the horizon, pulling her freight, knowing she could never have seen this gorgeous scenery without taking her own leap. “The thing I’m sad about,” O’Shea says as mile-markers fly by, “is that I didn’t do this sooner.”

This article was originally published June 22, 2018, on Coffee or Die. 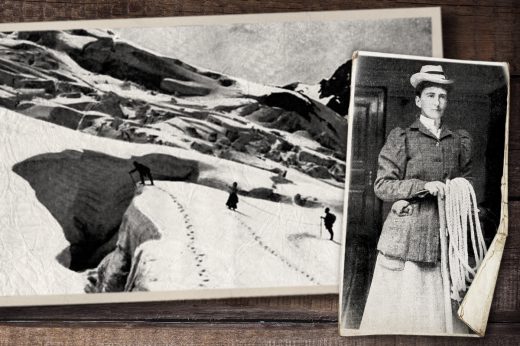