There is a magic hour on the South Fork of the Snake River — maybe only a magic half-hour actually — when cutthroat trout seem to spontaneously appear in the long sweeping riffles that spill into the river’s deep emerald green troughs.

The combination of the setting sun, a barely perceptible dip in temperature, and a sudden proliferation of blue-winged olive baetis dapping the broken surface of the riffles is just enough alchemy to produce dozens or more of these feisty, orange-jawed gems — and they’re all hungry as hell.

With 10 major subspecies, the cutthroat, or Oncorhynchus clarkii (named after William Clark of Lewis and Clark fame), is the most diverse species of trout in North America. Each of the subspecies falls into one of four evolutionary groups — Coastal, Westslope, Yellowstone, and Lahontan.

From a specific four-mile stretch of river in Colorado to a range that spans multiple states and river basins west of the Rockies, these are native fish that the earliest explorers found as they followed the sun west.

While each cutt subspecies may be genetically and geographically unique, they all share the same fiery red-orange dash of color just beneath their jawline that gives them their name.

Let’s take a look at the cutthroat trout that call the American west home and draw anglers from all over the world to fish for them.

Replacing the rainbow trout as Utah’s state fish in 1997, the Bonneville cutt is native to tributaries of the Great Salt Lake and Sevier Lake. They were an important source of food to Native Americans and early Mormon pioneers.

While they most definitely eat all manner of bugs, Bonneville cutthroat trout chow indiscriminately on other fish as well. Depending on where they’re located, Bonnies will eat chubs, gizzard shad, whitefish, Utah suckers, small bass, small walleye, and even other trout — a particular favorite being the state-stocked fingerling rainbows dumped into Mountain West waters by the millions. Could be why rainbows were canned as the state fish.

Given the latin name Oncorhynchus clarkii clarkii (because the species name wasn’t enough for him obviously), the native range of the coastal cutthroat trout extends south from the southern coastline of Alaska’s Kenai Peninsula to the Eel River in northern California. The semi-anadromous or sea-run form is the most well known, but freshwater coastals can be found in both large and small rivers, streams, and lake environments.

On the whole, the eastern range of coastals is rarely more than 100 miles from the coast. Generally speaking, the majority of coastal cutthroat will remain in or near estuarine waters, usually within 5 to 10 miles of their natal stream. While the decline in habitat has wreaked havoc on salmon and steelhead numbers in the same range, coastal cutthroat remain abundant.

Colorado River cutthroat trout (CRCT) are known for their almost outrageously bright color. Where most other trout put on a show during the spawn, these cutts wear their gold, orange, and crimson year round.

Historically, CR cutties’ home range was the cool water habitats of the Colorado River watersheds in Colorado, southern Wyoming, eastern Utah, extreme northwestern New Mexico, and northeastern Arizona. Today, they occupy approximately 16 percent of their historic range, primarily in isolated, small headwater streams. About 8% to 9% of the occupied historic range is classified as “conservation populations,” meaning they are known through genetic testing, or suspected to be, at least 90% genetically pure.

Greenbacks were native to the Arkansas and South Platte River basins in Colorado’s Front Range and a few South Platte tributaries in extreme southeastern Wyoming. Today, however, DNA sampling from modern populations and historical samples dating back to the 19th century have revealed that the only remaining population of pure greenback cutthroat trout is found in a four-mile stretch of Bear Creek, a tributary of the Arkansas River.

Greenbacks were listed as an endangered species in 1967, but thanks to conservation efforts, they were restored to levels that allowed for anglers to catch and keep them in 1978. Greenbacks have the largest spots of all cutthroats and can grow up to 18 inches, which is giant considering the water they call home.

Lahontan cutthroats are the largest subspecies of the ten — and they’re on the bucket list of almost every trout angler. Pyramid Lake is Mecca when it comes to these heavyweight cutthroat. The largest Lahontan caught was a meat-eater that weighed in at 41 pounds.

The Lahontan cutthroat is native to the drainages of the Truckee River, Humboldt River, and a handful more in the Great Basin — tributaries of massive Lake Lahontan during the ice ages.

Spawning runs from Pyramid Lake into the Truckee in the late 1800s filled the river with big fish. Commercial fishing efforts to feed local miners in the Sierra and the building of the Derby Dam in 1905 had Lahontans declared extinct in Pyramid Lake by 1943.

Fortunately, some juvenile Lahontans had been transplanted into other streams and a population near Pilot Peak survived. A US Forest Service fisheries biologist discovered the fish there in the late 1970s, and they were reintroduced to Pyramid lake.

The record fish in the lake might be 41 pounds, but there are stories, and supposedly photographs, of even larger fish from Pyramid.

It’s believed that between 5,000 and 8,000 years ago, significant erosion at the Silver King Canyon Gorge blocked the upstream passage of a subspecies of Lahontan cutts in Silver King Creek, a headwater tributary of the Carson River in California’s Sierra Nevadas. The population above the gorge was permanently cut off and became the Paiute cutthroat, named after the indigenous Northern Paiute peoples.

To make an even finer point, Basque sheepherders noticed the trout in the 1800s and by 1912 had transplanted them above Llewellyn Falls, which had originally been the upper limit. By 1924 hybrids with ordinary Lahontan cutthroat and introduced rainbow trout (cutbows) were found below Llewellyn Falls.

Although Lahontan cutthroats are heavily spotted, Paiute cutts have virtually no spots — possibly an evolutionary trait to keep them invisible from predators in the ultra-clear stream water.

Rio Grande cutthroat are the southernmost subspecies of North American cutts. While they live an average of only five years, in rare cases, some have survived into double-digits. Rio Grande cutthroats currently live on 700 miles of stream in the Santa Fe National Forest, which is approximately (and amazingly) 91% of their historical range.

Named after the water that it calls home, the Snake River cutthroat is almost completely covered by spots, unlike its genetically identical Yellowstone cousin. Snake River cutthroat might be eager eaters in the main channels, but they are far pickier in the spring creeks and slow-moving side channels found throughout the river valley.

While native cutts still dominate the Snake River ecosystem, there has been a decline in the cutthroat population from habitat loss, competition and hybridization with invasive fish species, improper fish passage systems, climate change, and water quality issues.

Giving a nod to Meriwether Lewis (because taxonomy wouldn’t work for Clark to get yet another fish named after him), the scientific name of the Westslope cutthroat trout is Oncorhynchus clarkii lewisi. The subspecies was first described during the expedition when they had reached the Missouri River near Great Falls, Montana.

Common in both headwaters lake and stream environments, the Westslope’s historical range included all of Montana west of the Continental Divide, as well as the upper Missouri River drainage. With an average size of 6 to 16 inches, the Westslope tends to have more small spots by the tail than other cutts and none by the pectoral fin. They’re also more of a silvery or greenish color.

Habitat destruction, the introduction of non-native hatchery strains, and competition and hybridization from introduced non-native fish species are the biggest threats to Westslope cutts.

Ahhh, yes — the alchemy-produced magic-hour fish. Yellowstone cutthroat used to be abundant from Shoshone Falls on the Snake River and tributaries in Wyoming, across the Continental Divide in Yellowstone Lake, and in the Yellowstone River as well as its tributaries downstream to the Tongue River in Montana.

In addition to overfishing and habitat destruction shrinking their historic range, population densities have been thinning since the late 19th century when non-native brook, brown, and rainbow trout were introduced.

Between subspecies interbreeding with rainbow trout — producing cutbows — in the Greater Yellowstone ecosystem and non-native lake trout in Yellowstone Lake crushing cutties up to 15 inches in length, conservation efforts are a continued high priority.

READ NEXT – Fish Per Mile: 9 of the Most Target-Rich Trout Rivers in the Lower 48 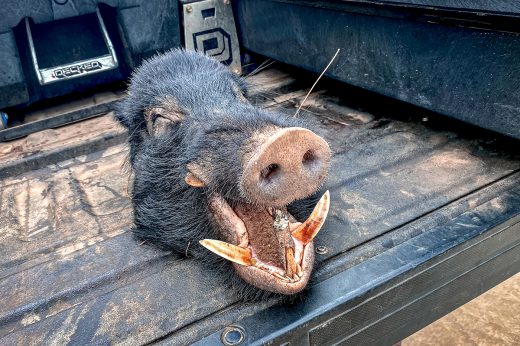