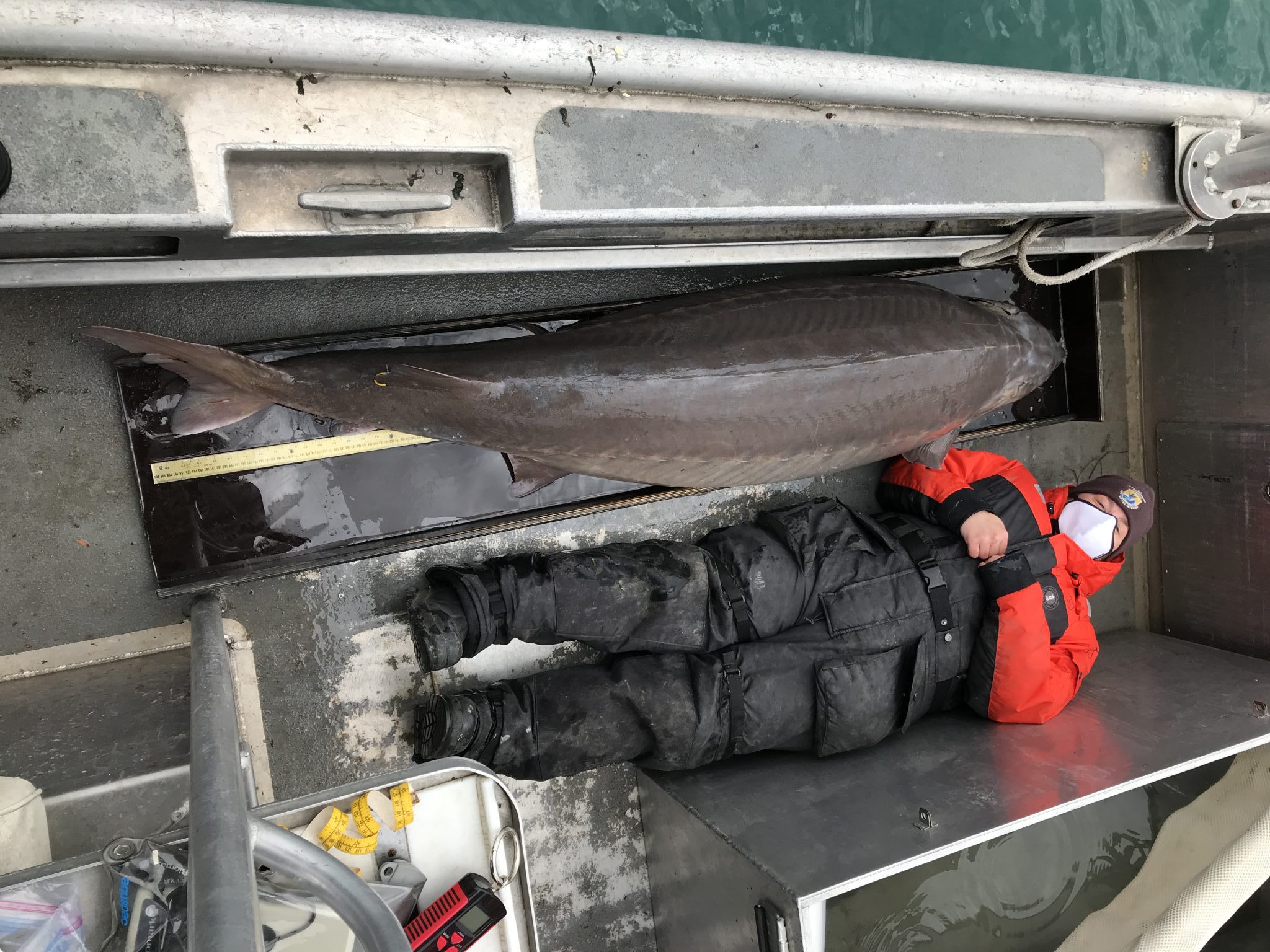 A 6-foot, 10-inch, 240-pound sturgeon was recently pulled from the Detroit River and recorded by biologists as one of the largest in the nation. The big female was estimated to be at least 100 years old.

For context, when this fish was born, the Ford Motor Co. was just firing up its assembly lines along the banks of the same river, Prohibition was in full swing, women had just secured the right to vote, and the country was just coming out of the global Spanish flu pandemic.

“If only that fish could talk,” said Scott Koproski, a project leader with the Alpena Fish and Wildlife Conservation Office. “We think that the age estimate might actually be a little conservative. She could easily be 150.”

Biologists are able to determine a close estimate of age from a cross section of the bone in the leading edge of the fish’s pectoral fin.

Koproski explained, “Just like a tree, [sturgeon] grow quicker and more in the summertime, and in winter their growth is compressed. We count the winter growth bands and that gives us our best guess at how old they are.”

Since 2000, the Alpena, Michigan, office has conducted surveys of the St. Clair-Detroit River system to check on the health of the sturgeon population. Large sturgeon have been caught in the Detroit River in the past, but none as immense as the dinosaur they hooked this year.

Jason Fischer, one of the fish biologists who caught the sturgeon, said, “We had a crew of three people doing the survey, and this fish took all three of us to get it onto our boat.”

Lake sturgeon, or Acipenser fulvescens, are one of 27 sturgeon and paddlefish species, all of which have a 200-million-year-old genealogy that dates back to when dinosaurs roamed the Earth.

Of the nine sturgeon species in the US, recreational fishing is only allowed for lake sturgeon and white sturgeon outside of the isolated Kootenai River population, which is endangered. The others are also listed as endangered or threatened.

Female sturgeon begin returning to their home rivers to spawn when they are around 24 years old and then spawn only every four to nine years. With spawning activity so rare, there are strict size requirements and bag limits on both lake and white sturgeon that anglers must follow to help keep populations healthy.

These freshwater giants spend their time at the bottom of lakes and rivers, shoveling their noses in the gravel or silt bottoms for insect larvae, crayfish, clams, snails, and leeches. Big females, like the one caught, generally live to be between 70 and 100 years old. Males typically only live around 55 years.

Recreational fishing for sturgeon is a relatively new activity. Historically, they were commercially harvested. Anglers fish for lake sturgeon much the same way that you would for big catfish or carp, except the sturgeon has the potential to be over 100 pounds — slow and low.

An 18-inch wire snell with a 5/0 circle hook baited with a bunch of worms or a frozen shiner minnow does the trick — and a no-roll sinker is placed above the rig to keep it stationary on the bottom.

Outside of indigenous communities who relied on sturgeon, in part, for their diet, it wasn’t until around 1880 that sturgeon were valued as food. Before then, they had destroyed commercial nets and were considered trash fish. Today, recipes for their meat cover everything from sashimi to the grill, and the eggs are prized as well when cured in salt.

Even so, between size regulations and catch-and-release-minded anglers, many sturgeon are put back in the water rather than in a cooler. This particular once-in-a-career female was returned to grow even more after being weighed, measured, and tagged for future data collection.

“Excitement, joy — any description along those lines was how the guys were feeling after that catch,” said Koproski. “She was certainly the biggest one my staff has sampled in the last 20 years.”

Read Next: In Praise of Shad