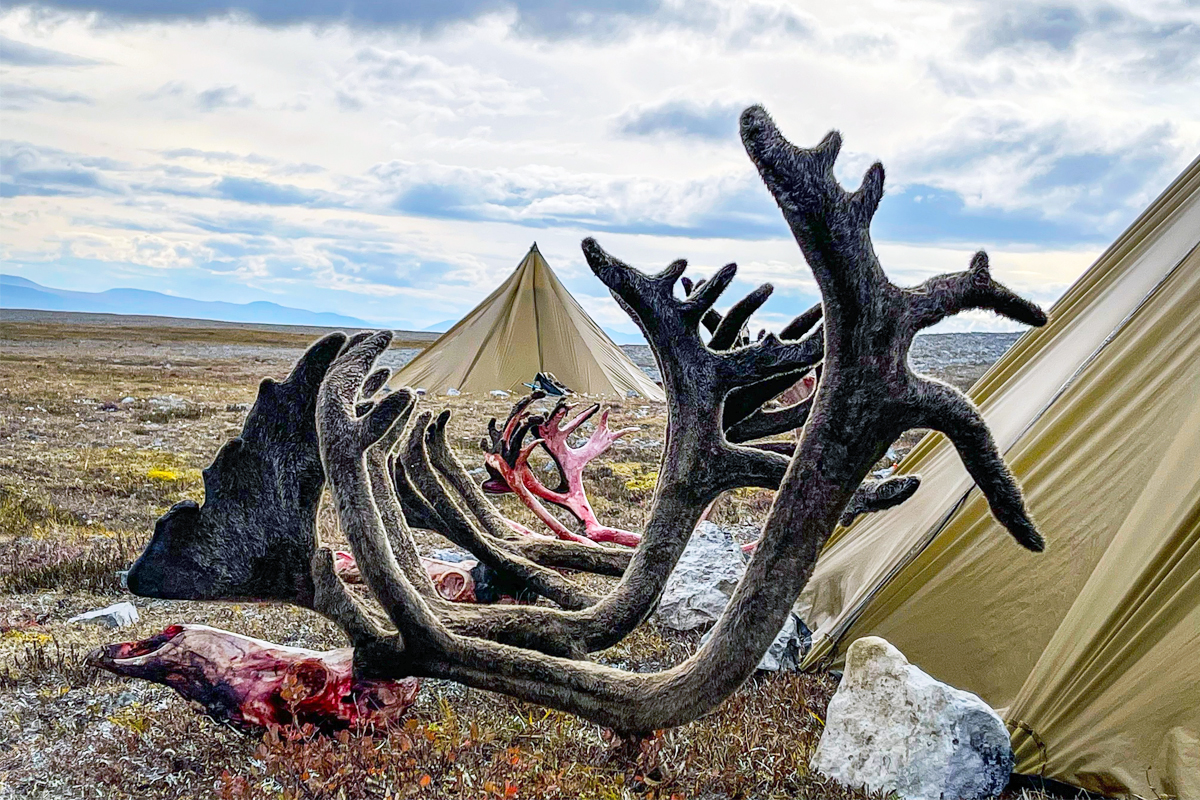 Frank Peralta’s rifle shot covered the 400 yards across the wide-open Alaskan tundra in a heartbeat. It dropped the big bull caribou where it stood. The gunshot was still an echo when his friend, Bill Vanderheyden, yelled, “Bear!”

A sow with two cubs in tow had spotted Vanderheyden, the founder of Iron Will Broadheads, as he stalked the same group of caribou with his bow. The four hunters started clapping and yelling; the big brown bears reversed course and moved back over the rise.

The high-fives had barely finished when the hunters spotted the three bears again, all making a beeline for the dead bull. They did “the most Alaskan thing you’ll ever see,” as Peralta put it, tearing straight into the carcass for a warm meal. The hunters watched the makings of a Nature is Metal highlight video through their glass as it unfolded before them IRL. The bears ripped the big bull apart.

Related: 6 Fatal North American Bear Attacks in 2021: Is This the New Normal?

This was Aleman’s first hunting trip to Alaska and only his third time hunting outside his home state of Utah. The mule-deer junkie filled a last-minute vacancy on an August 2021 trip and flew with his party out of Kotzebue with 10 days to spend in the sprawling Alaskan wild trying to fill four barren-ground caribou tags.

“I went to Alaska when I was 17 years old,” Aleman said. “My brother was stationed there. I could’ve cared less about it because I just wanted to chase girls. I went deep-sea fishing with my family, got seasick, and never went back.

“Flying out this trip, it just looked like miles of nowhere. I was coming from the city where even at the top of the mountain range, any peak, I can see city lights, so being out there in the middle of nowhere was just a surreal experience for me.”

Since it’s not legal to hunt the same day you fly in, the crew set up their eight-man Sawtooth hybrid tipi tent, squared away camp, and hiked out to glass for caribou.

“It was a game-rich environment. That’s the best way to explain it. Caribou were everywhere, pretty much any time of day. Some of them even came through our camp. I loved how all of them were unique — especially being in velvet,” he said.

Aleman had a lot less love for hiking across the tundra while they tried to outmaneuver caribou.

“People tell you to remember to go slow, don’t rush. You don’t want to blow out your knee, sprain your ankle, or anything. It’s like walking on inflated basketballs. It was like post-holing through crusted snow,” he said. “You need to be able to maneuver in that tundra because those caribou never stop moving.”

DeAustin punched his tag with a rifle shot on the first day of hunting. Aleman and Vanderheyden tried to get within archery range on other groups, but their stalks on solid bulls fell short. In Aleman’s case, he sent an arrow sailing over a bull due to a good, old-fashioned case of caribou fever.

Regardless, the crew ate well off DeAustin’s kill.

The second day brought Peralta’s “All-Alaska” moment with the sow and her cubs. Aleman later said the scene stunned him.

“When they got there, when they smelled that sucker, it was like a zombie movie,” he said. “Holy shit. They went to town on it.”

The men decided to leave the bears to their meal and return the next day to salvage the antlers if they could.

After a move, the men located another group of caribou with several big bulls. Vanderheyden was going to put on another stalk while Aleman prepped for a rifle shot.

“I was able to take my time and wait for him to come within range and calm myself down. I enjoyed just watching him through the scope. When Bill pushed the group, the bull walked into 500 yards, and I let it go. Boom. One shot dropped him.”

When Aleman walked up on his bull, the gravity of the moment punched him right in the chest.

“Their capes are just beautiful, and their antlers.” Aleman paused. “When you work in the hunting industry, especially the jobs I’ve had, you just don’t make a ton of money for trips like this. I’m also a dad, and my daughter is special needs and needs constant care. I never dreamed I would go to Alaska and do this.”

He plans to have the hide made into a blanket for his daughter.

“I’m in Alaska with one of my best friends, walking up and seeing this animal, and saying holy shit — I mean they cut it out of the video — I’m in fucking Alaska!”

Another bonus: Aleman discovered that he’s not allergic to caribou.

“I’m allergic to deer hair and elk hair. Bad. I welt up and have to take two Claritins,” he said.

As for Peralta’s bull, they finally collected the skull once the bears abandoned the kill.

“We waited another day and went back to the caribou,” Aleman said. “Dismantled. They ate the eyeballs. They ate the velvet off the antlers. They devoured it.

“Between our kills and the hunting party’s before us, [for] the next five or seven days, bears kept coming into camp. We honestly spent most of the time trying to defend the meat by scaring off the bears.”

Read Next: Bear Attack: Killing a Charging Giant at 5 Yards in the Alaskan Backcountry