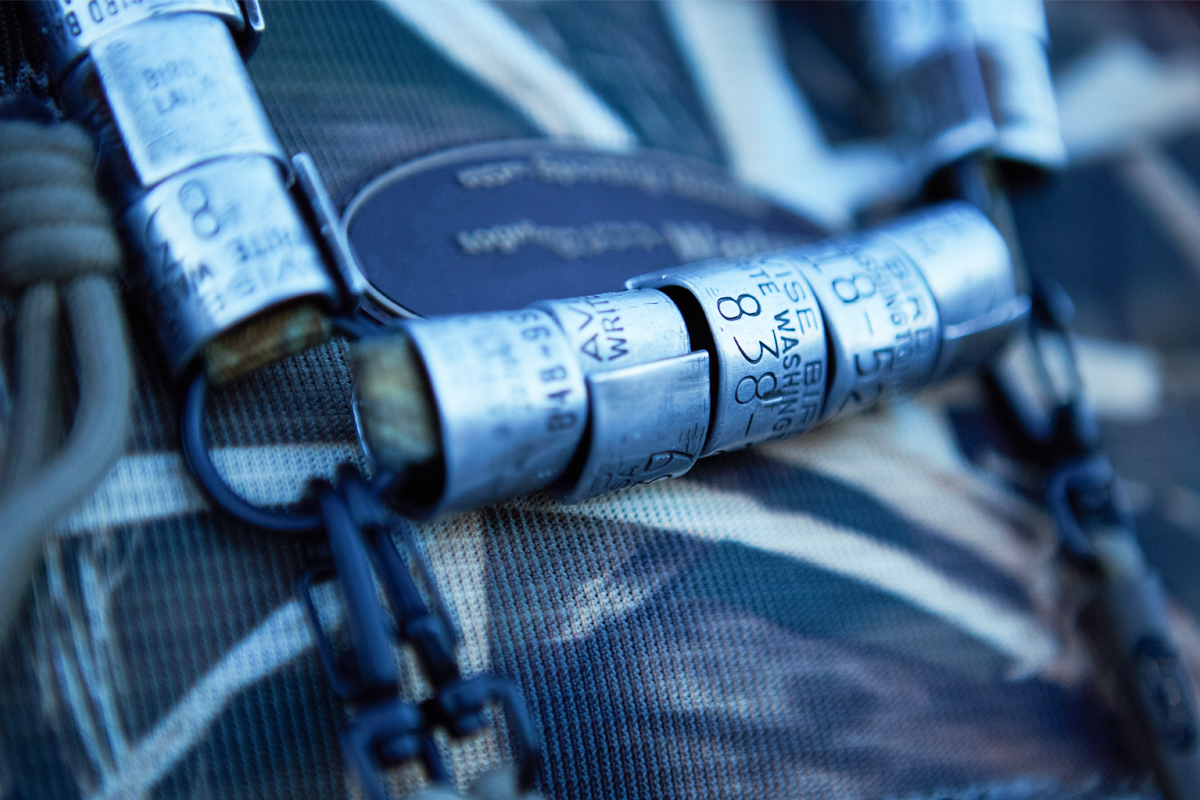 For serious waterfowlers, few things are more exhilarating than your retriever returning to the blind with a bird bearing bling on its landing gear. Taking banded birds is a rare thing; it’s the waterfowler’s equivalent of dropping a 150-class whitetail. Such an occasion isn’t special only because the bands look cool on a call lanyard but also because the hunter is participating in a process that helps keep waterfowl populations healthy and thriving for future generations.

Bagging a duck or goose with leg jewelry is a noteworthy accomplishment. Fewer than one in every thousand ducks bear these shiny metal leg bands. Even some veteran waterfowlers have only accumulated a handful of these coveted trophies through decades of hunting. Donning a lanyard studded with bands is a serious status symbol among duck and goose hunters.

While whitetail hunters can track the growth of a big buck over several seasons, migratory birds are an enchanting enigma that appear in droves each year as if by spontaneous generation. Our ancient ancestors must have viewed the comings and goings of waterfowl as something like magic, but modern research has helped us peer briefly into the secret lives and primal migratory pull of these feathered mysteries.

The History of Bird Banding

Bird banding is the practice of attaching a small, individually numbered metal or plastic tag to a wild bird’s wing or leg for identification. Data is typically recorded when the bird is captured and banded, like its apparent age and sex.

When the bird is subsequently captured or killed, a band can provide information on migration, longevity, mortality, population, territory, and even feeding behavior to be analyzed by ornithologists.

Data gleaned from thousands of bands has helped us better understand general waterfowl movement, and each band tells a story unique to the bird wearing it.

Although there is archeological evidence of bird banding dating back to the third century B.C., Danish schoolteacher and amateur ornithologist Hans Christian Mortensen is considered the father of modern bird banding. He personally ringed more than 6,000 birds in his lifetime.

John James Audubon was the first person to band birds in the United States. He tied silver strings around the legs of nesting Eastern Phoebes in 1803 to see if they returned to their place of birth. In 1902, Paul Bartsch, a curator of the National Museum of Natural History, was the first scientist to use numbered bands to gather scientific data about the movement of Black-crowned Night Herons.

Today, the North American Bird Banding Program, a component of the US Geological Survey, handles the bulk of banding work. The program manages more than 77 million archived banding records and information on more than 5 million encounters.

Each year, approximately 1 million bands are shipped from the Bird Banding Laboratory in Laurel, Maryland, to banders in the United States and Canada. Nearly 100,000 band encounter reports are submitted into the laboratory’s system annually. Many of those encounters are reported by waterfowl hunters.

Even though only about a third of the birds banded each year are waterfowl species, roughly 87% of reported recoveries are waterfowl. Because most banded birds are not hunted species, they have much lower recovery rates, which highlights the critical contributions hunters make to research when we report our harvested bands.

The earliest banding programs are responsible for our current understanding of waterfowl migration routes, timing, and speed. Information about waterfowl migration, communicated via handwritten correspondence, provided pioneering researchers with critical data in an age before radio telemetry and satellites. By plotting both banding and recovery sites, biologists were able to chart the four major waterfowl flyways — Pacific, Central, Mississippi, and Atlantic — that cover North America.

Most modern leg bands are made of lightweight aluminum or stainless steel and vary in size according to the species being banded. Each is stamped with a unique eight- or nine-digit serial number. Birds are usually netted or trapped before they are banded, although some young specimens are banded straight from the nest.

A ton of information can be tracked with that short series of numbers. When a duck, goose, or swan is banded, the number along with the bird’s age, sex, species, and location is sent to the Bird Banding Laboratory, where it is kept in a massive database. Information is also recorded for each subsequent encounter with the banded specimen. Those encounters usually occur when the bird is either recaptured by researchers or killed during hunting season.

From 1960 through 2021, the Bird Banding Laboratory recorded banding data for 77 million birds spanning 1,000 species and over 5 million encounter records. The database includes records for more than 6 million geese and over 14 million ducks.

“Banding, in general, is important to compile data, primarily through harvest reports,” Dan Delawyer, director of fund-raising and volunteer relations for Ducks Unlimited, explained to the Filson Journal. “The banding data gives us a wealth of information, and that data is provided by ethical waterfowl hunters. Without that data, we would be doing a lot of guessing and hypothesizing, as opposed to doing what we’re doing now, which is getting hard numbers and getting a really good idea of the migration patterns and behaviors of these migrating waterfowl.”

Not only is the information gathered from a recorded band important for researchers and conservationists, but it can also tell an intriguing story for the hunter.

“I think that’s what really fascinates waterfowl hunters,” explained Dr. Michael Schummer, Roosevelt waterfowl ecologist at the State University of New York. “Migration, in general, is what attracts a lot of people to waterfowl hunting. These birds are coming thousands of miles, sometimes over short periods of time, and end up over your neighborhood or in front of your duck blind on a given day.

“If somebody gets a band, it’s exciting to see where that bird came from,” he added. “Some folks are lucky to get a fair number of bands in their lifetime, but some only get a few.”

How to Report a Banded Bird

The hard truth of hunting is that not all birds that are killed are recovered. That makes it even more important to report recovered banded birds. Hunters who report their harvested bands become a fundamental component of waterfowl management and conservation.

Some hunters may be reluctant to report a banded bird, believing it could lead to stricter hunting regulations. However, reporting banded birds can actually lead to less stringent regulations; the more hard data researchers have to work with, the more confident they are in population numbers.

While you can no longer do so by phone, even if the band has a phone number stamped on it (as of 2017), reporting a leg band is incredibly easy. Simply visit the Bird Banding Laboratory website at www.reportband.gov and follow the prompts. You’ll need the band number, and you will be asked to report how, when, and where the bird was recovered.

You get to keep the band to string on your lanyard, which not only provides a memento of a successful hunt but also marks your participation in a much larger mechanism that is an important tool for conservation in the US, and largely fueled by data gathered by hunters.

Read Next: Waterfowl Starter Kit: Everything You Need to Slay Ducks and Geese