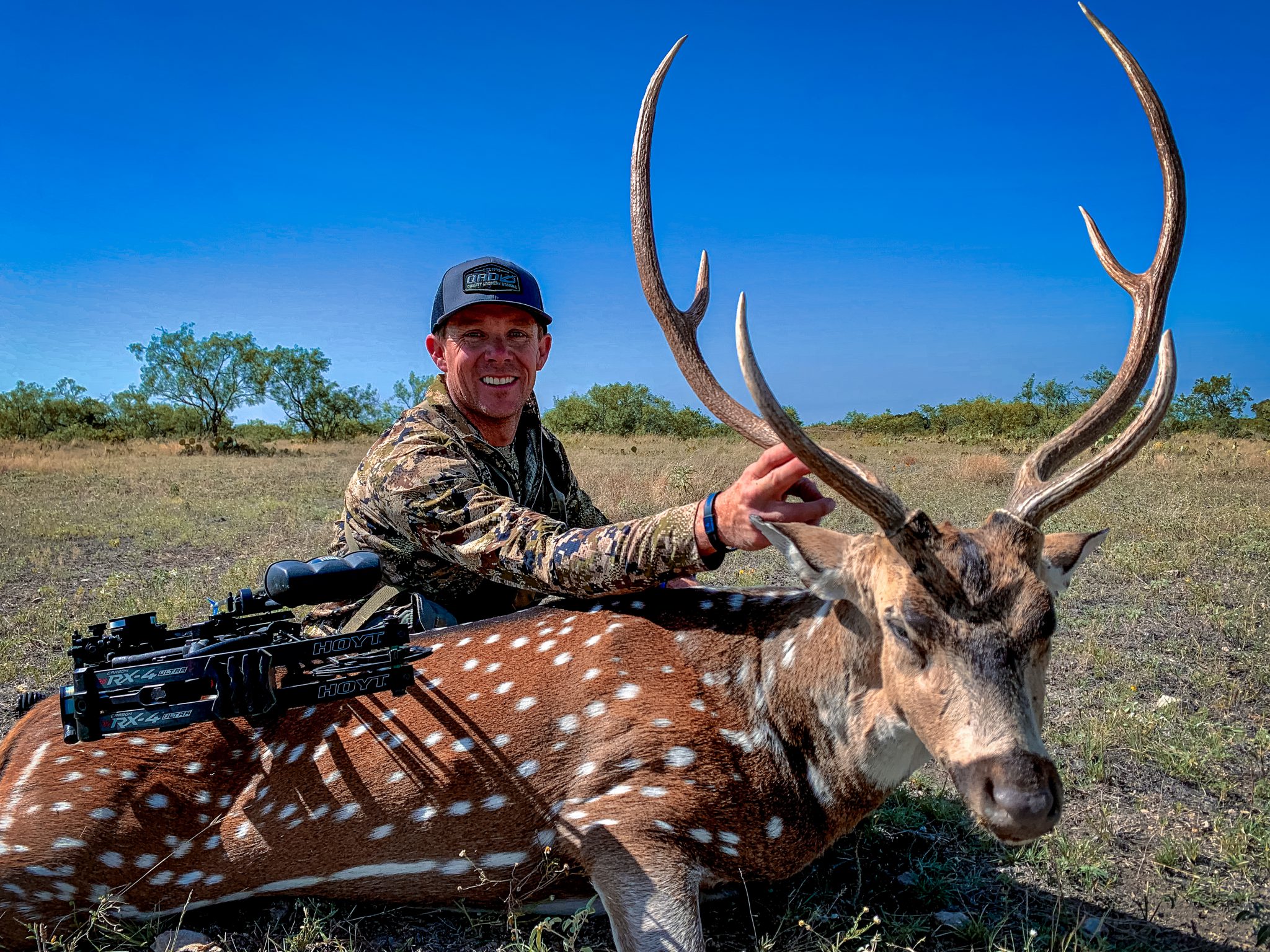 Bowhunters are finaglers. We’re always scheming, thinking outside the box, and looking for ways to extend our hunting season by going on one more adventure. You know it’s true. If you’re looking for a summer big-game getaway, look no further than the Lone Star State.

Don’t tar-and-feather me: I’m not talking about a high-fence venture. I’m talking about chasing free-range axis deer somewhere along the Edwards Plateau.

Native to India, axis deer were Imported into the US back in 1932. Also known as chital deer, the species has flourished in Texas, and these white-spotted beauties have become one of my all-time favorite species to chase in that state with a stick-and-string.

Current population estimates are between 15,000 and 18,000 animals, primarily residing in the storied Texas Hill Country, which contains the 37,370-square-mile Edwards Plateau.

If you put in some internet and social media time, you won’t have a problem finding an outfitter or rancher selling free-range axis hunts. But before we get into top-end outfitters, let’s dive into what makes axis deer hunting in Texas such a worthwhile trip.

Axis deer are unique in that they breed throughout the year. June and July, however, have been labeled by biologists as peak rut times, and I couldn’t agree more. If I had to pick a time to hunt axis in Texas, it would be during the hot summer months. Here’s why.

First, like all big-game critters, the spotted deer need to slake their thirst often. Waterhole activity can get intense when the rut is coupled with sizzling summertime temps. Just like hunting rutting pronghorn in early- to mid-September, sitting in a ground blind, treestand, or natural hide over a well-used axis water source can get flat silly in terms of how many animals you will see. It can get Africa-like in a hurry. On my last axis hunt, I shot a buck at 7:03 a.m. on the first morning. While I waited for the outfitter to arrive, I had 12 other shooter bucks come in to drink.

Another great reason to chase axis bucks is that they’re highly vocal, like elk; their roar is remarkable and sounds like something you wouldn’t want to hear in the woods at night while camping alone. Every time I hear an axis roar, it gives me chills, and if you’re in a high-concentration axis area in June or July, it’s not uncommon to hear more than 100 roars in a given morning or evening.

Combine intense roaring with herds of bucks working tirelessly to defend their harems, and you can count on some fantastic spot-and-stalk opportunities. Just like when a bull elk is bugling on his own, and you use the terrain to slip in close, you can do the same with axis. The Texas Hill Country is beautiful, and the landscape is conducive to spotting a bull at a distance with your optics and then using the cover to get bowhunting close.

Two years ago, North American Whitetail editor Haynes Shelton and I had an insane morning in Texas. There were so many bucks roaring we didn’t know which direction to go. After tailing a gagger buck and his girls for over an hour and avoiding the eyes of numerous satellite bucks, Shelton made a final sneak on the brute once he bedded down with his does. The heavy stench of urine — estrous mixed with burn-the-nostrils buck piss — was something I will never forget as we closed in on the axis’ sleeping ground. At a distance of 12 yards, Haynes made a perfect shot.

If you need another reason to get to Texas — trophy axis bucks will chase an estrous doe like a cagey whitetail buck. A buck will leave his group of girls and dog the smelling-right doe. I was perched in a treestand situated between known axis bedding and a massive natural water source on my first-ever axis hunt. The morning activity was insane, and had I been on my A-game, I would have cut an arrow loose. I got busy glassing a distant axis and failed to notice the buck that chased a doe right beneath my stand. That evening, after listening to one of the most intense horn-to-horn battles I’d ever heard — these things rut hard — a buck tailed a ready-to-breed doe under my stand, and I made good on my opportunity.

Hunting axis is thrilling because you can use so many tactics to your advantage. During my time in the Texas axis woods, I’ve killed bucks by spot-and-stalk, at rut stands between food and water, and over water holes.

Axis is what beef should taste like, and most outfitters and landowners will let you take home both a buck and a doe. Axis is, without question, the most delicate meat I’ve ever eaten.

In addition to the axis, chances are good you’ll have opportunities at other animals that will be included with your hunting package, like hogs. The Hill Country is a target-rich environment, and I’ve yet to make a trip where I didn’t have feral swine stroll under my stand or locate a group in an excellent spot for a stalk.

A free-range hunt on the Edwards Plateau is affordable. You’ll need a Non-Resident 5-Day Special Hunting license (Item 157 – $48). You select the day you want your license to start, and then you’re set for five days. Most bowhunters coming from other states fly into San Antonio, and they can expect a round-trip flight to set them back between $200 and $350. That’s an average, and I’ve found them cheaper. One of my favorite travel methods, though, is to rally some buddies, split the gas, and make a road trip out of it.

When it comes to the cost of a Texas axis deer hunt, do your research. Be sure to contact the outfitter and ask lots of questions. Remember, you’re the client, and it’s your money. If the outfitter wants that money, they will be glad to answer all your questions and provide references.

I also recommend taking a peek at Craigslist and Facebook. Many Texas landowners are starting to sell free-range axis hunts directly. Just know when you go with a landowner, you usually won’t have a guide, and typically, food and lodging are not included.

SOE Hunts, run by veteran hunter Mike Stroff, is my favorite operation. Stroff and his crew are great and provide a second-to-none experience. An investment of $3,350 gets you an axis deer hunt package that includes food, lodging, a guide, and a crack at an axis buck and doe, plus unlimited hogs.

Of course, everyone wants to know about success rates. I killed a 33-inch axis buck, an axis doe, and eight hogs on my most recent trip with SOE. (I skewered three hogs with my bow and pounded five with a rifle.) This was my fourth trip to the ranch, and my success rate has been 100% so far.

One final thing you can gain from an axis deer hunting trip is a good deal of experience shooting at live animals in a short span of time. And, in my opinion, the best way to beat buck fever is to shoot lots and lots of animals with your bow. Texas is a great place to do this.

On a recent four-day trip, I harvested a pair of axis deer (a buck and a doe) and three hogs with my bow. That’s five animals in four days. If you want to improve your shooting and learn to become a stone-cold, ice-water-in-the-veins killer, this is the hunting trip you have to take.

READ NEXT – Texas Elk Hunting Is Brimming With Free-Range Opportunities