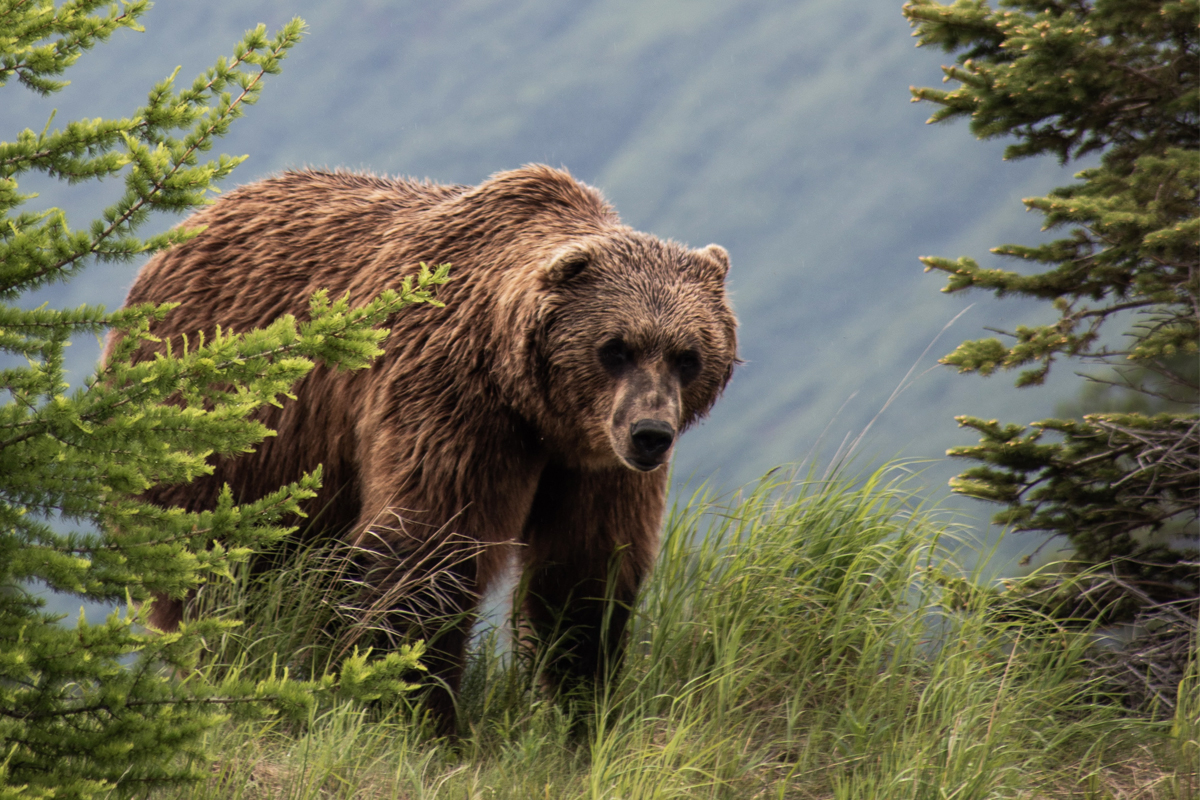 The sun warms your shoulders as you adjust your pack and make your way down a path strewn with pine needles. It’s only a bit wider than a well-used game trail, perfect for a solitary hike through the backcountry. As you crest the ridge, ready to rest for a minute at the top and take in your surroundings, you realize two things: You’re not alone, and your afternoon hike is about to become one of the worst days of your life. Why? Because you’ve just walked between an angry grizzly bear and two of her cubs.

“Play dead,” says Wesley Sarmento, a grizzly bear management specialist with Montana Fish, Wildlife, and Parks. “[If you attempt to fight back] she sees you as a potential threat to herself and her young. If the bear actually hits you and you don’t have a gun or bear spray, play dead.”

Of course, when a human goes up against any bear at striking distance, the odds are always stacked in the bruin’s favor. The best way to survive a grizzly bear attack is to know how to avoid one in the first place.

“When recreating in bear country, it is important to be vigilant whether recent incidents have occurred in a particular area or not, and to be prepared in case of a bear encounter,” said Frank van Manen in a recent interview. He’s a supervisory research wildlife biologist with the Interagency Grizzly Bear Study Team, so advice from him and Sarmento matters more than most.

Here are some tips on how to stay safe and hopefully prevent a chance encounter with a grizzly:

Know How To Identify Key Bear Habitat Before You Head Out

This is the most important measure to take to avoid a bear attack.

Learn what kind of terrain bears prefer for eating and sleeping, and always keep an eye out for any tall bushes, boulders, or other natural landforms that could hide a grizzly at first glance.

“Land management and wildlife management agencies in our region provide excellent information for recreationists via their websites, visitor facilities, and trailheads, and we encourage everyone planning to recreate in grizzly country to take advantage of these resources,” van Manen said.

Don’t Hike at Dawn or Dusk

Grizzlies are most active at dawn and dusk. Be especially cautious if you are hiking in known grizzly territory in early spring. That’s when they wake from hibernation, ready to gorge and refill their bellies after a long winter. You don’t want to be around for that.

Because bears have an amazing sense of smell, always keep food in bear canisters when camping in these areas. When hiking, be sure to take all wrappers and smelly trash with you. These measures are essential for keeping bear encounters at bay.

Be Loud to Avoid Bear Attacks

Bears will avoid you if they hear you, and if you avoid surprising a bear, you may avoid a bear attack.

“Making noise is key, especially in brushy areas or near creeks and rivers — places that are going to cover up your sound, so they’re less likely to detect you,” Sarmento said. “You have a higher likelihood of surprising [a] bear on windy ridges.”

According to the National Park Service, bears are more likely to hear and smell a group of hikers than a single individual. A group also means more eyes on the trail, increasing the likelihood of at least one person spotting a grizzly before anyone else does.

It should be noted that the agency “highly discourages” trail running in the backcountry since it can be easy for a runner to surprise a bear.

Bear spray is typically made of red pepper oil (oleoresin of capsaicin) and is delivered in a fine mist. It inflames any animal’s eyes and upper respiratory system and acts as an effective deterrent if used properly during a bear attack. It’s best to keep your bear spray handy at all times while in bear country. Clip it to your waistband or your backpack strap.

If a bear charges, immediately flick off the safety clip and then depress the nozzle when the animal is 30 to 60 feet away. That is the ideal distance for effective bear spray deployment, according to the park service. This will empty the entire canister at the animal and hopefully turn it away.

Going From Avoiding to Surviving

If you come face-to-face with a grizzly, the spray doesn’t work, and you don’t have a gun, do what Sarmento recommends: Lie face down on the ground and keep your pack on – it will act as a shell to protect you a bit – and play dead. Do not fight back. You aren’t going to beat a grizzly in a hand-to-hand fight. That said, the playing dead approach only really works when a mother is defending her cubs, and it’s not recommended when dealing with black bears. Sometimes grizzlies attack people for other reasons, but those incidents are few and far between.

It’s important to remember that it is “extremely rare for a grizzly bear to see someone as prey,” Sarmento said.

“The last time someone was killed and consumed in the Northern Continental Divide Ecosystem was over 20 years ago,” he added, referring to an 8,900-square-mile area in northwestern Montana.

Check out this video series from the International Association for Bear Research and Management for a thorough overview of bear safety.

Read Next: 6 Fatal North American Bear Attacks in 2021: Is This the New Normal?