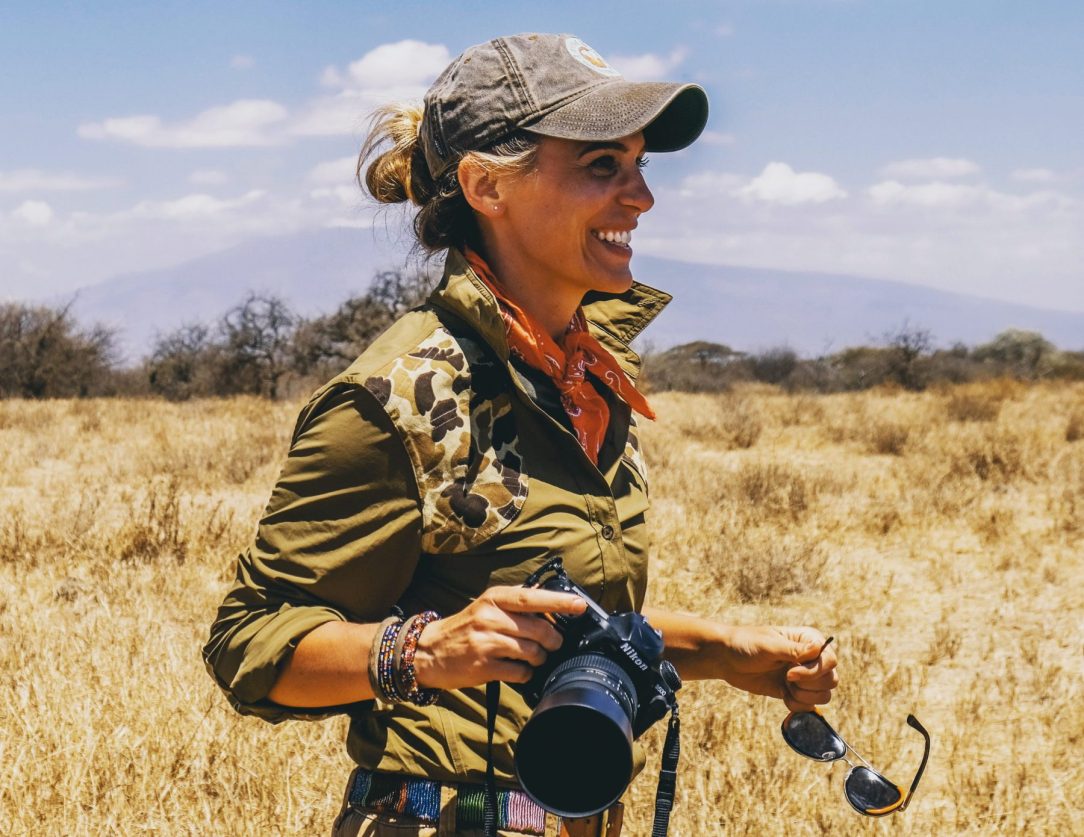 Some people are born with an untamable wanderlust and thirst for adventure, such that no conventional office job or traditional nine-to-five will ever satisfy them. Britt Longoria embodies this mentality. Raised on the southern coast of Maine, she grew up training bird dogs with her father and hunting upland birds and waterfowl, dreaming of one day moving to Africa and owning her own safari company. By 15 years old, she’d begun spending her summers in South Africa, working for a safari-hunting outfit. By 20, she’d founded her own bird-hunting company in South Africa that catered to international wingshooters. Since then she’s gone on to enjoy an enviable career as a guide, big-game hunter, pilot, philanthropist, consultant, and business owner. Britt graciously agreed to a Q&A with The Ultimate Predator, in which we were able to learn more about her experiences and her perspective on hunting.

TUP: Your story reminds me a great deal of author and big-game hunter Peter Hathaway Capstick, a New Jersey native who was on his way to becoming a successful Wall Street executive when he resolved to become a hunting guide in Africa, instead. What was it about hunting and Africa that intrigued you so much and from such an early age?

BL: Actually, it’s sort of the inverse: At an early age I wanted to own a safari company and lodge, but later I realized I liked to be a client more than the guide. I grew up in Maine, with parents who were entrepreneurs in the Telecom industry. My father engineered fiber optic systems in rural and remote parts of the world. Growing up on bedtime stories of East and West Africa seemed fairly normal to me and certainly gave me a comfort level with those parts of the world.

TUP: You’ve spoken fondly of father-daughter hunts with your dad; how has he been a guiding influence on your passion for hunting?

BL: My dad, Joe Hosmer, and I would take a father-daughter hunt annually, just us two. It was one of the most special gifts, his time and attention in the wilderness. He loved hunting, but more so, he was a conservationist and loved the land, wildlife, and people. His passion for conservation has been a major influence in my hobbies, personal philanthropy, and career.

TUP: African big-game hunting has historically been a predominantly male-dominated industry. Have you found that to be a barrier to becoming part of it, or has the mentality shifted in recent years?

BL: Hunting is one activity that has no gender barriers associated with the effort or success. As a woman I can climb that mountain, walk for miles, shoot accurately, maintain my gear, train a bird dog, etc. just as well as any man. Hunters are more often men; however, I never felt a barrier, less welcomed, or suppressed anywhere in the world. Even as an American, Christian woman, one of my favorite countries I’ve hunted in is Pakistan. If anything, sharing a mutual love of hunting breaks down barriers of sex, creed, nationality, and religion unlike any other pastime I’ve partaken in.

TUP: If someone wanted to follow in your footsteps and become a hunting guide in Africa, what one piece of advice or guidance would you offer that you had to learn the hard way?

BL: I went to university in Pretoria, South Africa for Eco-Tourism, which focused on natural sciences and business management. This academic education was invaluable when learning indigenous perspective, local conservation principles and how they differ from the North American model, as well as diving deeply into all the natural sciences ranging from ethnobotany, ornithology, astronomy, zoology, soil sciences, and so much more. As an American, I was unable to get a professional hunting guide license in South Africa. Instead, I got my Field Guide Association of South Africa (FGASA) license and Trails Guide license, enabling me to guide on foot in dangerous game areas, which is similar to the shooting course required to get the professional hunting license. I guided photographic safaris and then ran a wingshooting safari company that catered to the northern areas of South Africa. As far as a key piece of advice? Know the laws of the country to determine what you can and can’t do as an expat.

TUP: What inspired you to found your philanthropic company, Rock Environmental, LLC, and what do you hope to accomplish with it?

BL: Rock Environmental was my transition back to the U.S. I knew that all I had learned in southern and eastern Africa; the contacts and networks in the anti-poaching, wildlife conservation programs; and humanitarian work was still of value. Rock Environmental started off working with nonprofits overseas that focused on conservation and outdoor education. I consulted from the business perspective of creating strategic plans, board development, fundraising, and grant writing—all while being U.S. based. For many of these smaller nonprofits it gave them credibility to have a U.S.-based person, and on the other hand, with all my experience in Africa, I could understand how things worked on the ground.

Since creating Rock in 2009, we’ve worked on five continents. I received my master’s in philanthropic leadership from the University of Denver in 2015. Right now my focus is on my role as the executive director for Trinity Oaks, a San Antonio-based nonprofit that provides free outdoor, hunting, and fishing experiences to those in need. 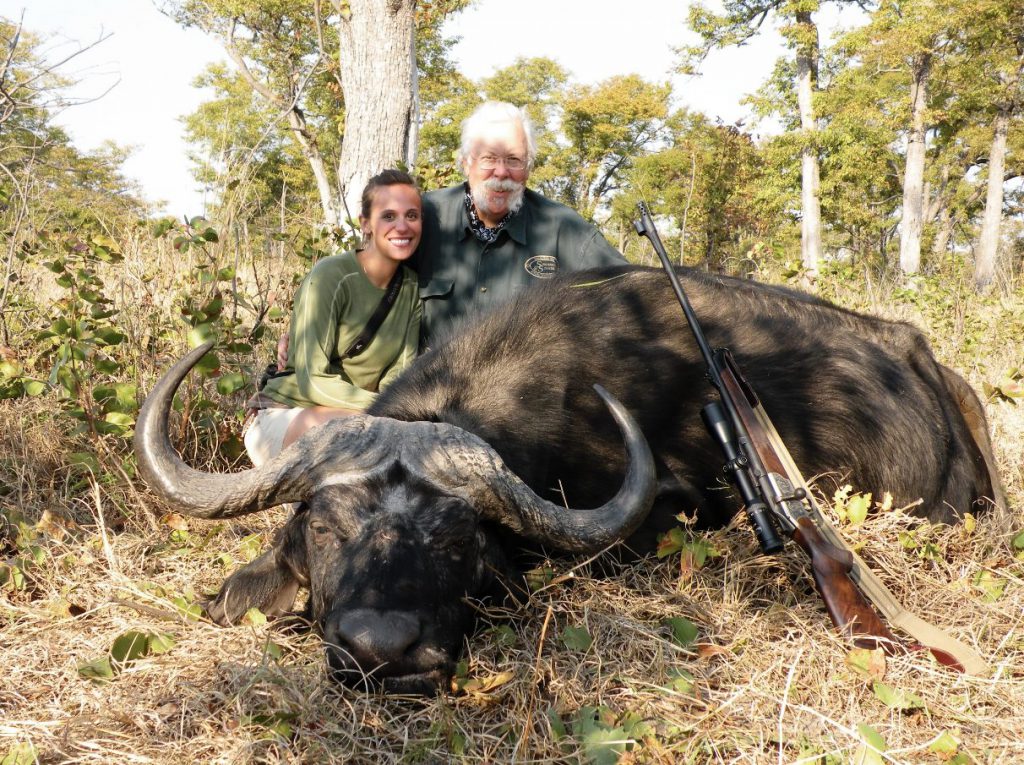 All the hard work of becoming a guide in South Africa has paid off. Courtesy of Britt LongoriaTUP: We’ve frequently written about how hunting is so much more than killing and how essential it is to conservation. You’ve experienced firsthand the visceral reaction of those outside the hunting community to our sport when a photo of one of your successful hunts was illegally obtained and went viral. That could happen to any of us. How did this experience inform your view of non-hunters and the importance of educating those outside our community?

BL: It was my ah-ha moment. I understood that the public outcry of the photo was not about me personally, it was about all hunters and hunting. Through the noise and anger, when I listened to what people were saying, they were asking, “Why? Why hunt? Why travel to hunt? Why a predator? Why the smile in the photograph?” It inspired me to ask myself these questions that I had never thought through prior. After three months or so, when the crowd quieted down, I decided to create @BrittLongoria to dive deeper into my “whys” and explore who I am as a hunter.  It’s been fascinating and has led me to start working on a PhD in Communications.

TUP: What do you think is the most pressing threat to hunting, and how do you think we should work to overcome it?

BL: Loss of wilderness. We need wild places to remain wild and ecosystems to be interconnected.  Scientifically managed hunting, all over the world, provides the highest dollar value and lowest ecological impact. There is absolutely no doubt that the future of African wildlife is bleak. Population explosion and habitat loss increases human-wildlife conflict and threatens to destroy all forms of biodiversity. Many people have a hard time understanding the overused phrase that “hunting is conservation.” Let me rephrase it: Hunting is wilderness conservation. It’s not just about species, it’s about LAND.

There is no one “fix-all” strategy to conserving wildlife. The only way to achieve success is to implement multiple conservation and management practices of both consumptive, low-impact hunting tourism and non-consumptive, higher-impact photographic tourism that work together for one common goal: the continued survival of wildlife, habitat protection, and indigenous people’s traditional way of life.

This interview originally ran on The Ultimate Predator on June 7, 2021.