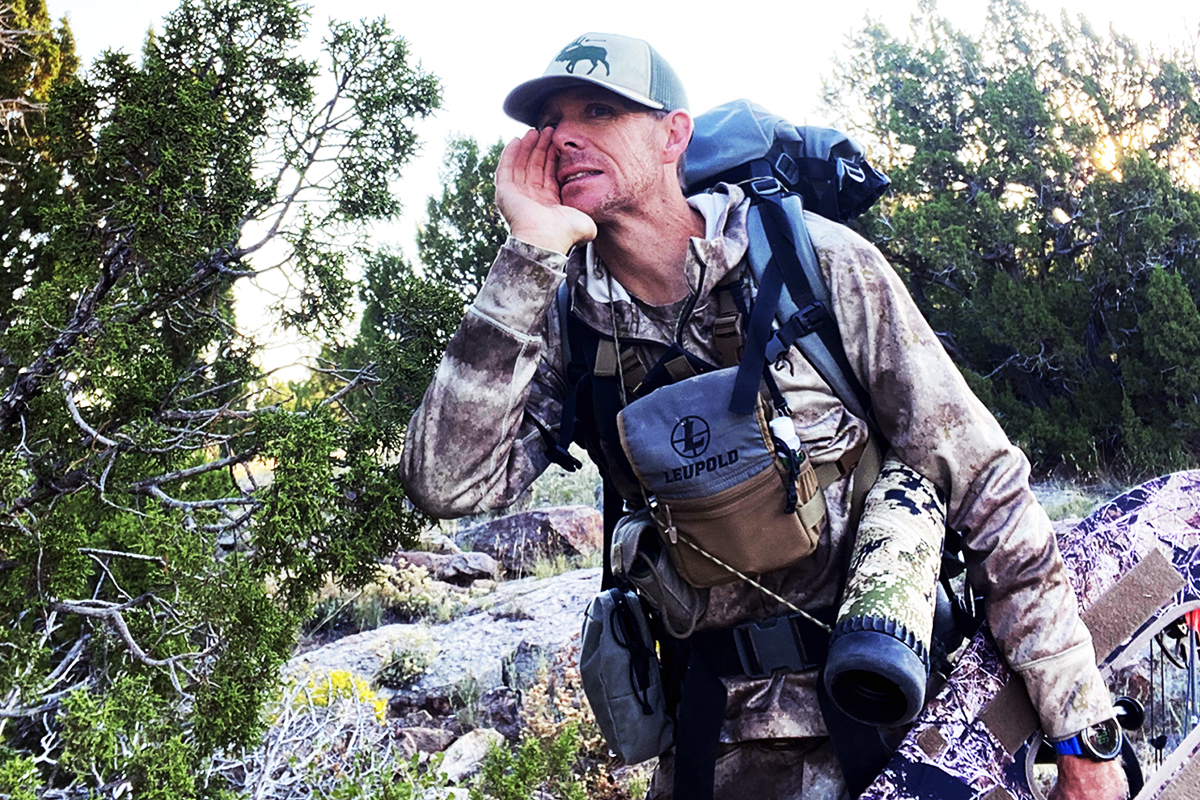 Elk are big, regal, and majestic. They taste incredible, their antlers are remarkable, and they live in storied country: dark timber patches, unsullied alpine meadows, aspen-sprinkled hillsides. They are magical, mythical animals to observe and to hunt.

They also can’t shut the hell up.

Elk are a social species. They love to talk. Few sights and sounds on planet earth will raise the hair on the back of your neck like the guttural bugle of a bull elk. Cows will quietly “mew, mew, mew” with every step through the timber, too, letting each other and those loud-mouth bulls know where they are. Elk talk, and when they do, here’s what they’re saying:

All Bull: What’s He Saying?

When a bull bugles on his own, he’s simply taking the temperature of the mountain. He wants to know the location of other bulls in the area. This bugle is called a locator bugle. It’s easy to identify and one of the most common vocalizations made by bull elk. The locator bugle is a non-aggressive two or three-note bugle that doesn’t get high or have any big finish. It’s a magnificent sound, and while you can finish bulls with a locator bugle, it’s often not the best call to work a bull bowhunting close. Here’s why.

Imagine you’re at the grocery store and hear someone yell your name. It’s not an aggressive shout like someone wanting to fight. Instead, it’s your neighbor from across the street. He’s just letting you know he’s in the produce aisle, too, while maybe flashing an easy wave. You don’t need to walk over to him, and he doesn’t need to walk over to you. You wave and move on.

A locator bugle does just that. It’s an acknowledgment. Then the bull typically moves on. If you get a bull to answer a locator bugle or hear a locator bugle, pay attention to the wind, and move toward the bugle. Once you’re close, you can make a simple cow mew — nothing with an estrous whine to it — to see if he will answer. You can use a locator bugle again to check the bull’s location.

Imagine the grocery store again. This time, after your neighbor gets your attention, he flips you the bird and lobs an f-bomb. This is the second type of bugle, the challenge bugle. This is the bugle that gets elk killed. When a bull makes a challenge bugle, he puts his entire heart and soul into it. The top-end of the call is high, almost deafening, and typically ends with a growling scream. If the bull is hot, he may add a few chuckles at the end. This bugle will send your heart into palpitations.

When a bull challenges another bull, he’s trying to insult the bull and let every cow in range know there’s a new boss on the mountain. That neighbor in the grocery store just followed up the f-bomb with an insult about your mother’s alleged promiscuity. A fistfight is coming.

If a bull challenges you, come right back over the top of him with everything you have. If you’re not dizzy when you lower the bugle tube, you did something wrong. This is an emotional call. Don’t be afraid to let it ring and create a big start and finish.

If you can master and identify these two bugles, you can call a bull bowhunting close. Yes, this is all it takes most of the time. You can dive into glunking, chuckles, and the like, but if you stay focused on learning to identify and create this pair of bugles with complete mastery, you’ll put elk on the dirt.

Elk are one of the most vocal animals in the Cervidae family, which includes deer, caribou, and moose. Herds can get massive during the summer and late winter, and cows and calves get very vocal. During the September rut, things don’t change much. Herds are smaller, but cows and calves are still chatterboxes.

Some will tell you to master the estrous whine. You can, but I don’t feel it will help you much. This is a call you don’t hear cows make often. Hunters make it a lot, though. They wander through the woods whining on reed-style calls, and savvy bulls get shy to this sound very quickly.

Master a simple cow “mew,” as well as the calf chirp. Cows mew all the time, and so do calves. It’s natural, and if a bull is hot and is coming to your cow talk, chances are you won’t need an estrous whine to seal the deal. Single cow mews are easy to replicate. Keep it short, simple, and sweet. Don’t try to get nasally, and you’ll be just fine.

The best way to master a true cow mew is to visit YouTube and listen to live cow talk. One call that replicates a perfect mew and is 100% foolproof is the tried-and-true Primos Hoochie Mama. Depress a rubber bulb, and the perfect mew is made.

The mew of a calf is like that of a cow. The big difference is the call will be much lower and more like a squeak. I’ve finished a fair number of bulls that got quiet after answering a locator bugle from a distance by moving in close and making simple cow/calf talk.

Don’t overcomplicate it. Know and master these sounds, and you’ll be better than 90% of the elk hunters sharing the mountain with you.

Reed-style calls work excellent on private ranches and in locales where elk receive very little pressure. In over-the-counter public land areas, they can do more harm than good.

Purchase a half-dozen diaphragm calls and start practicing. Diaphragm calls have come a long way in recent years, and those from top-end call creators like Rocky Mountain Hunting Calls and Phelps Game Calls are the ticket. Both use premium tapes, tailor call sizes to fit different mouth sizes, and use quality latex. The good news is that most diaphragms will produce bull and cow sounds. Rocky Mountain’s Mellow Yellow Mama and Phelps’ AMP Orange are my go-to cow/calf calls.

When it comes to bugles, stay away from flute-style bugles with pre-set reeds. Flute bugles suck, trust me. They sound like crap, and while they may dupe a private-ranch bull, they’ll do you little good in the DIY, OTC, public-land woods.

Some of my all-time favorite diaphragms for creating bulges include Rocky Mountain’s Black Magic, All-Star 2.0, and Raging Bull Palate Plate. From Phelps, the Signature AMP, Pitch Black 2, and the Smith Signature AMP.

Learn these calls, and you’ll have a better shot of packing out heavy on your next elk hunt.

Read Next: Bowhunting Elk: 7 Last-Minute Efforts That Can Improve Your Chances