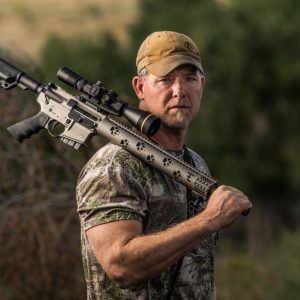 Fred Eichler is the owner of Fulldraw Outfitters in Colorado where he guides 10 months of the year for antelope, elk, mule deer, whitetail deer, bear, mountain lion, and turkey. He is the host of the Everything Eichler show on the Sportsman Channel, which highlights the bowhunting and predator hunting Fred is so well known for, along with the guiding, ranching, farming, and homesteading life the Eichlers lead. Eichler wrote the book Bowhunting Western Big Game and has contributed to a number of other publications. Currently, he is the traditional editor of Bowhunter magazine, the hunting editor for Western Hunter magazine, and his articles and photos have also appeared in Bugle Magazine, Elk Annual, Bowhunting World, Mule Deer Foundation, Predator Nation, North American Hunter, Muley Crazy, Buckmasters, and Traditional Bowhunter magazines.

My dad was a Green Beret back in the day, and he had some pretty cool experiences jumping out of planes and helicopters. When I told him I was going to be hunting coyotes from a helicopter to manage the predator population on a ranch that was losing ...